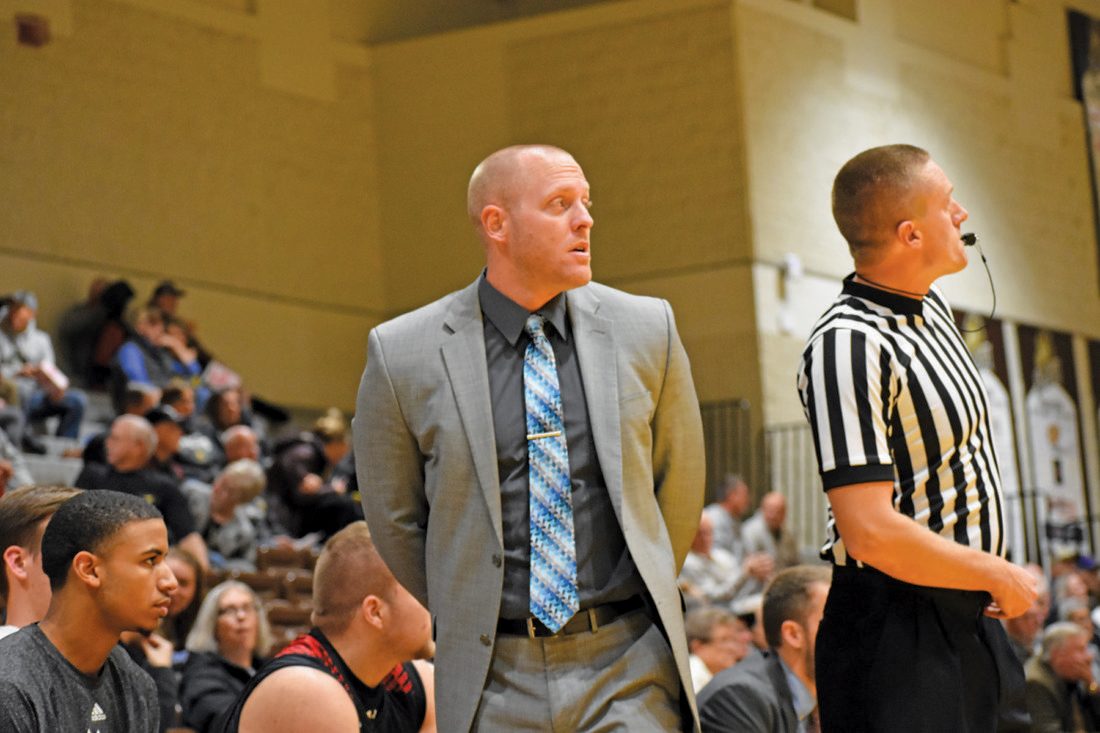 Independent file photo Bethany Lutheran College coach Matt Fletcher looks on as his team plays SMSU during a game on Nov. 19, 2018. Fletcher, who played from 2004-2008 with the Mustangs, was hired at the men’s basketball coach at Concordia-St. Paul on April 6.

Matt Fletcher has spent a lot of time around the Northern Sun Intercollegiate Conference. Whether it was from his playing days as a sharp-shooting lefty at Southwest Minnesota State University or helping out on the sidelines as an associate head coach at Upper Iowa University, the North Branch native is certainly no stranger when it comes to this specific region.

Now, he’s making a return to the conference he has called home before and this time it’ll be in a new role.

Fletcher was recently named the latest head men’s basketball coach at Concordia-St. Paul after spending the past four seasons at Bethany Lutheran College. He will be the 10th head coach in the program’s history as a 4-year college team since 1967.

Fletcher said it’s a great feeling to be back in the NSIC and the position at CSP was something he had his eye on for a while.

“It feels really good. This job is something my family has been looking at for a while; my wife and I are from the area and it brings our kids closer to their grandparents,” Fletcher said. “I’ve always wanted to coach in the NSIC, it’s one of the best conferences in the country.”

After graduating from SMSU in 2008, Fletcher made coaching stops at multiple schools before working his way back to the Northern Sun at UIU. After a season with the Peacocks, he joined BLC in the 2016-17 season.

At BLC, Fletcher helped turn around a program that went 15-35 in its previous two seasons before his arrival, leading the Vikings to a 76-33 record in four seasons, a pair of Upper Midwest Athletic Conference Tournament titles as well as two appearances in the NCAA DIII Tournament.

Despite the success Fletcher saw in his first college head coaching position, he ran into roadblocks just like every other coach. But it was at BLC where he was able to find his strengths, especially when it came to recruiting, and is grateful for what he learned while with the Vikings.

“You have to find your niche in the recruiting field and find your strength. You’re never ready to be a coach until you’re in it and running a program is running a program no matter where it’s at,” Fletcher said. “At BLC I had to learn on the fly and learn how to lead practices and things like that, so I am very fortunate for my time at BLC.”

One area that has taken the college basketball as well as the rest of the sports world by storm has been COVID-19 and its effects. Fletcher said it’s been difficult to try and get to know his new players without any in-person meetings and added they have to tighten their recruiting schedule, but knows every team is in the same position.

“It’s been tough to do things without that face-to-face interaction but we’ve been having Zoom meetings and things like that. We’re still trying to recruit multiple players and basically conduct a whole year of recruitment into one month, so communication is key,” Fletcher said. “It’s been challenging, but everybody is in the same boat and we’re doing everything we can to strengthen relationships with these student-athletes.”

Fletcher said he’s excited to make regular trips to Marshall and be in the same gym where he helped set career records in 3-pointers made (305) and free throw percentage (.853, now second on the list) and is second in 3-point percentage (44.8%). He also scored 1,375 career points, which ranks ninth on the SMSU scoring list.

He’s also looking forward to coaching against SMSU coach Brad Bigler, who was an associate head coach for the Mustangs while Fletcher was a player. The two faced off against each other in November 2018, with SMSU defeating BLC 101-81.

“Talk about a rare experience to not only return to the league that I was in, but to be able to coach against your former coach,” Fletcher said. “SMSU has a close place in my heart and I’m still in touch with some of my former teammates, some of them reached out to congratulate me when I got the job. To be able to play them and continue to see that friendship with coach Bigler grow will be special, he has taught me so much and I’m incredibly thankful for him. I’m also excited to see if I can beat him twice.”