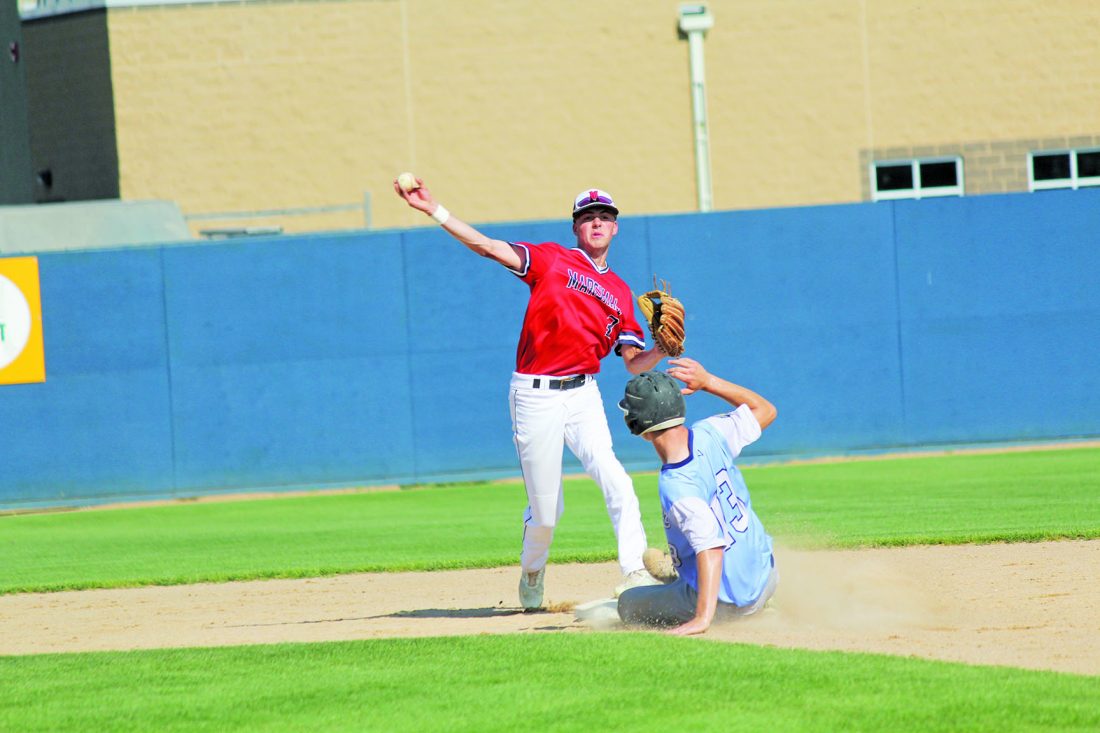 Photo by Jake Przytarski Marshall’s Peyton Grant throws to first during their sub-state tournament game against Willmar on Friday. The Mudcats fell to Willmar 10-3.

WACONIA - A 10-3 loss at the hands of Willmar on the third day of competition at the sub-state 15 playoffs marked the end of the Marshall Mudcats’ season on Friday at Lion’s Field. Marshall concluded the tournament with a 2-2 record and finished the season 10-6 overall.

According to Marshall coach Mitch Maxwell, Friday’s performance was uncharacteristic given their sharp display in the field in their previous three contests.

“It was kind of an uncharacteristic game for us,” said Maxwell. “We made some mistakes that we usually don’t have and that opened the door for some opportunities for them and they took advantage of those opportunities. They’re a good hitting team and if you give them an extra out or an extra base they take care of it and take advantage.”

Reflecting on the team’s overall run, Maxwell tipped his cap to the senior leaders for all of their achievements throughout the spring and summer seasons.

“When you put things into perspective and you look at what this senior group has accomplished in the spring with the state tournament run, won the Wood Bat Tournament (and) did well in Princeton, you have to tip your cap to the fellas,” said Maxwell. “Especially the seniors for providing leadership.”

Maxwell went on to thank the American Legion for their support as well as all of the parents for all of the work that they put in behind the scenes.

“I have to give thanks to the American Legion and their continued support,” said Maxwell. “We can’t do what we do without them, so we respect that and respect that organization for what they do for us. And then thank the parents for everything that they do and the things that get done behind the scenes. As a coach I can’t ask for a better situation than what we’ve got in terms of support. So I’d like to thank those people and those groups.”

After splitting the two-game series with Willmar during the regular season, the Mudcats expected a challenge when the third matchup got underway and ran into trouble in the early innings with a daunting six-run deficit accumulated through two complete.

On the hill for Marshall to start the game was Cody Greve, who lasted 1 and 2/3 innings before Jordan Mernaugh took over in relief. Greve ended the outing with one earned run on four hits and recorded one strikeout.

Mernaugh’s outing got off to a less than ideal start in the bottom of the second inning when Willmar’s Drey Dirksen connected on a three-run home run to left field to extend their lead to six runs. Marshall would respond with a run in the following frame on a grounder by Riley Alcorn to score Jackson Hughes who led off with a double. Unfortunately, that was the extent of the scoring for the Mudcats until the fifth inning.

In need of a rally to close the gap, the Mudcats received a much-needed break when Hughes led off the inning and reached on an error before back-to-back singles by Greve and Alcorn cut the deficit to four runs at 7-3. With no outs, Marshall was unable to do any further damage at the plate as three straight strikeouts ended the inning.

Willmar’s final three runs came in the latter half of the inning via a double and one of the Mudcats’ four errors in the field. The four errors for Marshall exceeded their previous three-game total in the tournament.

Though it was a disappointing way to end the season, Maxwell sees a lot for which to be excited about when looking ahead to next season.

“If you put together our Junior Legion with our Legion team certainly we have some numbers that are there, and we have some depth,” said Maxwell. “I think that most importantly this group coming up needs to use the example that was set forth to them by the senior group and then those that have come before them too. We’ve had some great ball players and great leaders come through the program and they need to look at what they did and try to match that.”