Marshall’s mystery vehicle will be seen driving the streets of Marshall again this summer and will return to visit where it was bought — Sturgis, S.D 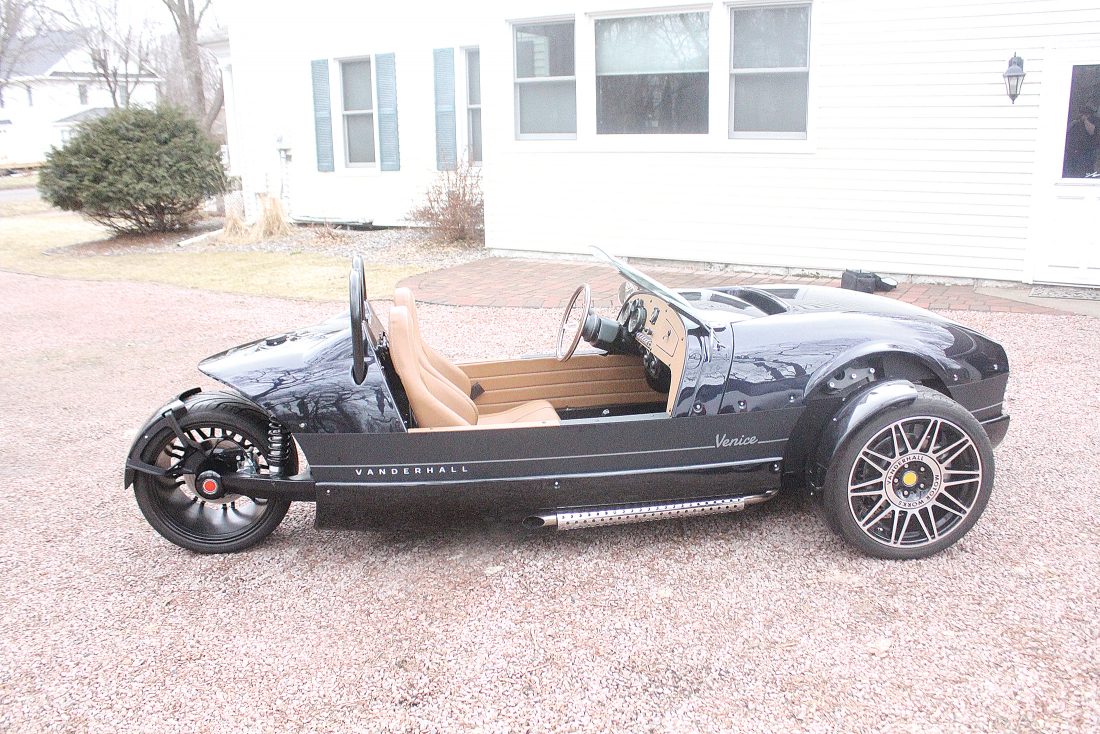 Photos by Jake Przytarski Jan Loft and her husband, Doug Pilgrim, bought a Vanderhall “autocycle,” during their annual visit to the Sturgis Motorcycle Rally this past summer.

Described as a cross between a motorcycle and a car with one rear wheel and two wheels in the front, the ultra-rare line of Vanderhall “autocycles” manufactured in Provo, Utah, are a sight to behold at first glance.

“I joke with people that it is not for a shy person because it gets lots and lots of attention,” said Jan Loft of Marshall.

Loft and her husband, Doug Pilgrim, are the proud owners of a 2020 Vanderhall Venice model after purchasing it on a whim during their annual visit to South Dakota for the annual Sturgis Motorcycle Rally this past summer. Being that it was their 25th trip to the event, the two were looking for something new and exciting to try in their latest excursion.

“We said let’s try to find something that we’ve never done before,” said Loft. “We saw a Vanderhall near Sturgis and it was actually a dealer driving it and it caught our eye.”

Intrigued by the mystery vehicle, Loft and Pilgrim went to the Harley Davidson dealership and explored three models on display: the Blackjack, the Venice and the Carmel — all named after beaches and seaside towns in California. After a test drive, Loft quickly came to a verdict.

“When we got back to the dealer I looked at (Pilgrim) and I said ‘I want one,’ so we traded in my beautiful 2008 Harley Davidson Deluxe,” said Loft. “I had a custom paint job on it and it was a beautiful motorcycle, but I just traded it in that day. Of course that wasn’t a straight across trade.”

Using a fifth-wheel truck to haul it, the newly purchased Vanderhall Venice traveled across the state of South Dakota and into Marshall where it has resided ever since. Loft said it didn’t take long before the vehicle was attracting attention all over town this past summer given its sleek design.

“I would have people follow me and they were waiting for me to park. One day I had to go to the post office so I whipped into a parking spot in front of the post office and this guy pulled up right beside me and he rolled down his window and he said ‘what is that?’ So I had to tell him all about it,” said Loft.

In the weeks following the purchase, Loft and Pilgrim went to their go-to auto-service and dealership — Lockwood Motors — to have its employees take a look at the new vehicle. Given that the nearest Vanderhall dealership is all the way in Osseo, the two hoped that Lockwood Motors would be able to service their vehicle if it were to need maintenance in the future.

“(Lockwood Motors) contacted Vanderhall and after a little go-around, they convinced them that it’s a Cheverolet engine (and) we can fix this,” said Loft. “Anything that happens to this engine we can take care of. So Lockwood Motors was able to have Vanderhall agree that I can have my warranty and maintenance work done right here in town at Lockwood Motors.”

After a shortened first summer of use, the Venice has needed no such service done and remains ready for warmer weather in the months to come. For now, the vehicle remains tucked away in the garage under a protective cover where it will remain until Loft and Pilgrim decide to take it for a spin around town and hopefully make their trip back to Sturgis come August.

“As of today we still have plans to go back to Sturgis, and it’s going to Sturgis with us,” said Loft. “With good luck, everybody else will be on their motorcycles, but I’ll be going through the hills in my Vanderhall.”