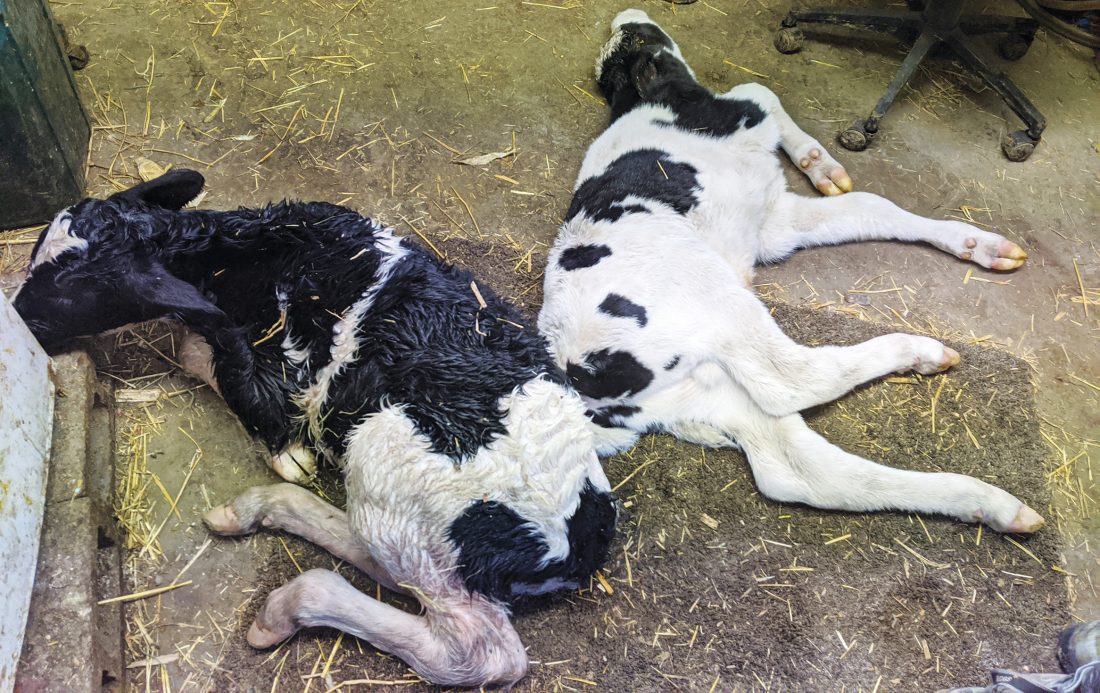 Three calves were born on the same day on Feb. 19 at the Stelter Holstein Dairy Farm in Wodd Lake. The two calves in the above photo were born in the morning.

It’s almost noon on a brisk February morning. David Stelter walks by a couple of dairy cows standing inside the barn and into a small room to check on the newest additions.

Two calves, just hours old, lay on the floor, their heads resting on the pieces of carpet laid out for them. One of the calves appears to be shivering.

Stelter grabs the other calf to lift it up for a good look.

“He’s about ready to go out there (with the other calves in hutches where they are individually raised),” he said. Stelter said he doesn’t like to send a calf to a hutch if it’s unable to drink from a pail because it’s more difficult.

“They have to be able to drink on their own,” he said.

After inspecting the calf, Stelter declares “he’s all dry.”

All in all, it was a pretty good morning at the Stelter Holstein Dairy in Wood Lake which already includes about 300 cows.

“There’s a period of time from about 3 a.m. to 6 a.m., if a calf is born on a really cold night, that calf might not make it. Depending on how good the mother is,” he said. “If the cow gets up and starts licking, the calf will make it. “

Several hours earlier in the morning, Stelter said he had some concerns over one of the calves.

“When I first saw her (heifer having the calf), there was red mucus and I thought, ‘oh crap, we are going to have a breached calf or something go wrong.’ Because usually the mucus doesn’t run red like that. Turned out everything turned out great, but it took this long. It all started about two and half hours ago. Timing was OK, I didn’t have to pull the calf.

“Part of the reason I was fairly lucky this morning because I knew at the time she (mother) started and I could see the progress. As long as they are progressing, you want them to do it by themselves because the natural dilation is better than if you try to pull them out too soon. You can sometimes do more damage than good,” Stelter said.

While Stelter talked proudly of his busy morning, he was quick to point out that he has a team that works on the dairy.

“I have a very good experienced crew,” he said. One of his employees feeding the cows has been with him for 25 years. Another two workers have been with Stelter for 10 years and are in charge of other workers who fill in on the weekend. And a teen-age neighbor helps with some of the “mechanical stuff.”

“I usually don’t have to deal with too much of that (day-to-day operation),” he said. Besides the management end of running the farm, Stelter said he handles some of the little chores like hauling the manure. He also handles the crop farming and chopping.

“I’m fortunate, I’m still farming with my dad. I farmed with my grandpa. So I’ve been blessed,” he said

And I always wanted to be there for my daughter (Sadie). She chose to do it.”

Sadie Stelter, the youngest of five children, a standout basketball player at Lakeview, is now attending Southwest Minnesota State University studying agribusiness management. She also helps out with the calves.

According to Stelter the process of breeding the heifers starts at 13 months old.

“So when they are 13 months I try to get semen in them,” he said. “So the thought process is — I can get those cows big and healthy, and if I can get them pregnant at 13 months, they’ll have a calf at about 21, 22 months. Which means from the time they are born, before they are 2 years old, they’re making me money instead of taking money.

“It’s very expensive to raise a female dairy animal from birth to the time they have their first calf. The number that has been told to me over the years is about $2,300. So if you’re taking them to the sale barn and you get $1,100, just let that sink in with how much money you’re losing.”

Stelter Holstein Dairy has been utilizing sexed semen for seven years, according to Stelter. It’s commonly used in the dairy industry, according to beefmagazine.com. It states that 90 to 95 percent of dairy cows are artificially inseminated.

“(They are) combined with beef, SimAngus and Limousin semen so that all of our male calves or non retained heifers are marketable beef cattle. So the only heifers we have now are the ones that we want to have. So I breed cows that I want to have daughters out to sexed semen,” he said.

“That technology wasn’t there available 15 years ago. So now we’re able to to sort genetically. All my animals are DNA tested. Exactly how good they are. So if I have some really top-end genetics, I can focus on those animals. Every decision I make today I won’t know the effects up for three years. So when you breed a cow, it’s three years before you know it was the right decision. Well, with DNA testing and genomics that we are able to use genetically now, some of that predictability has been proved.”

Before that technology was available, Stelter said farmers depended on proven bulls that previously had daughters that had a history of certain level of milk production.

“Now we are using bulls that — the history of that particular genetic line is one of the strong health traits. Livability, production — and they can break out all these traits. You know pretty much going in what will take that animal out in it’s life time. Whether it’s feet, legs or udders. You know it, so you can focus on management in that way. Try to avoid those pitfalls.”

Stelter said the whole concept of genetic technology is fascinating to him. He believes adding that technology to his operation has helped boost milk production.

“Over the last decade I’ve increased my milk from 24,500 (pounds) rolling herd average to just shy of 30,000 (pounds). So this herd is probably one of the best. Probably in the top 5 percent in the state. I’m very proud of that. I’ve worked extremely hard,” he said. “This morning we’re at 96 pounds. So, the average individual of this farm today was 96 pounds.”

A double parallel milking parlor is used at the Stelter Holstein Dairy. The cows stand on an elevated platform at a 90-degree angle facing away from the operator area. Access to the udder is between the rear legs.

In Stelter’s operation, a computer board measures the milk flow and it identifies which cow that is being milked and also records milk weights.

The milk is shipped to processing plants for cheese production. Stelter said the milk market is stable at the present moment.

“I was a little surprised by January milk prices. I expected it to be lower. Usually January, February, March are our lowest months as far as generating dollars. November, December period is usually pretty strong because of the increase usage of cheese. September is usually OK because school starts again. They (school) use a lot of dairy products,” Stelter said

All of the feed for the dairy is raised on the farm. That includes corn, alfalfa and wheat. The wheat is raised for straw for feeding the cows

“I do a lot of alternative cropping, combining it with my cover crops because I have the ability to use a lot of forage on my farm,” Stelter said. “Cover crops have kind of been a godsend to my operation because I can incorporate so many of the things that we do for cover cropping back in feed. At times I wish I had more hills and valley so I could pasture more. Since my land is all very flat, it’s pretty good farming, but not good for pasturing. But we do have about 40 acres normally in alfalfa, which does a lot to keep the soil in place for soil health and microorganisms and things like that and a tremendous amount of manure.

“Cattle manure is not real high in nitrogen, but its very high in organic matter. So my soil here is anywhere from 7 to 9 percent organic matter, which is the most important side. Most corn, soybean rotation farms are about one, one and a half to two. So my ability to handle healthy crops has improved.”

Stelter plants fescue with his alfalfa, which is genus of flowering plant belonging to the grass family Poaceae.

“There are four different varieties of the fescue all over America. I try to get the most digestible haylage that I can make. We try to bail and that’s my challenge too,” he said.

Stelter also reuses the sand that is used for the cows to lay on.

“Cows love laying in sand. It’s like being on a beach. But it’s a lot of work,” he said.

The work involves cleaning the sand after it’s been used by the cows. Stelter is proud of his cleaning system that involves what he calls a sand lane located in the back of the barn. He designed and built the lane in 2008 with help from some Dutch farming friends. The sand lane acts like a river.

“The sand and the manure settles out and then we wash the sand back in through the water that’s flowing through this river,” he said while pointing to the lane. “We stack it up, about 60 days after we take it out. We put it back in three stalls. It’s all clean. It’s cleaner than the sand we buy. In the wintertime we have to buy it because our pile is pretty solid (frozen).

Besides his sand lane, Stelter is also proud of the family farm.

“I was always brought up to think that the harder you work — you will always prosper if you work hard. But when that gets taken away from you, then what do you got? I’m a very strong Christian, so I believe that everything is in the hands of God anyway. And being a farmer, I know that’s the case,” he said.

Just hours later, another special event on the farm. Cow No. 5236 delivered her heifer calf.

“The day appears to end on a blessed note,” he said.