Area woodworkers get together at the Marshall High School woodshop 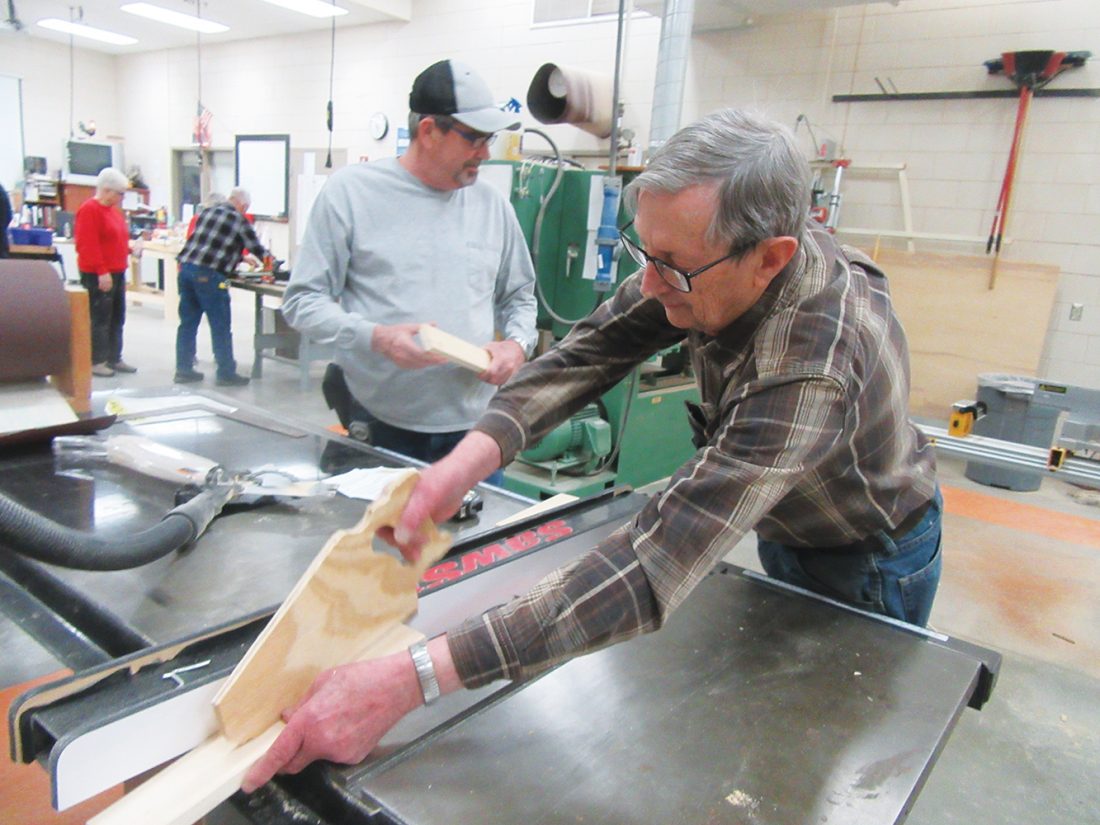 Photo by Karin Elton Bill Koska uses a push stick to make a groove in the sides of what will be a picture frame while Curt Boerboom holds the other piece of wood that will need to be grooved.

Marshall area retirees aren’t just whittling away their time — they are creating wooden toys and household items such as picture frames and cutting boards.

The toys, such as checkerboards and lawn dice, will get collected and stored until the middle of December. That’s the time Lyon County Heart to Heart starts gathering money and presents for needy area children for distribution.

The Adult Woodshop convenes from 3:15-5:15 p.m. every Thursday through May 7 at the Marshall High School Woodshop. Area adults can use the MHS Woodshop facility and its equipment under an experienced supervisor for a fee of $25 per person, according to Marshall Community Services. The “experienced supervisor” is Bill Koska of Marshall who has been a part of the woodworking group since 2001 when it was at the old middle school.

The woodworking class started way before 2001, Koska said, with Don Otterson, who died in 2018. He led the Marshall Senior Woodworkers for nearly 30 years.

Norma Gile has been spending her Thursday afternoons at the MHS woodshop since she retired from nursing in 2006. At that time there were “like 16, 17 members,” she said. “Now there are about 10. Some have passed away, moved away or have had medical issues. New members are more than welcome.”

Curt Boerboom of rural Marshall has attended the Thursday gatherings just a couple of times so far.

“I haven’t worked with wood since I took shop in high school,” he said.

Boerboom is currently making a “Farmhouse Picture Frame,” with Koska’s help. An 8-x-10-inch photo can be inserted between the sides and Plexiglass will fit over that. Boerboom will “router the edges, sand it and then oil it,” said Koska.

Gile was making a cutting board out of walnut and oak scrap wood that she found in the garbage at the woodshop. She spied the pieces of wood and thought “I can make something out of that.”

Gile glued the pieces together and placed them in a vise to hold it until the glue dries. She then will “put it through the planer and cut it to the size you want and then sand some more.” The cutting board will be given to Prairie Home Hospice for an auction item.

Donna Slettedahl of Marshall said she tells other retirees to come join them. “They say, ‘I don’t know what to do,’ I tell them just come and ask questions. We’ve got so many skilled guys. You just have to ask. They’re so nice about stopping and helping you,” she said.

And there’s food every week. Margaret Roberts recently brought a mid-class snack of crackers, cheese and sausage for the group.

Koska said many of the attendees have woodworking equipment at home — it’s just more fun to create items together.

“It’s for the community,” he said. “We have a good time and hopefully won’t lose any fingers.”