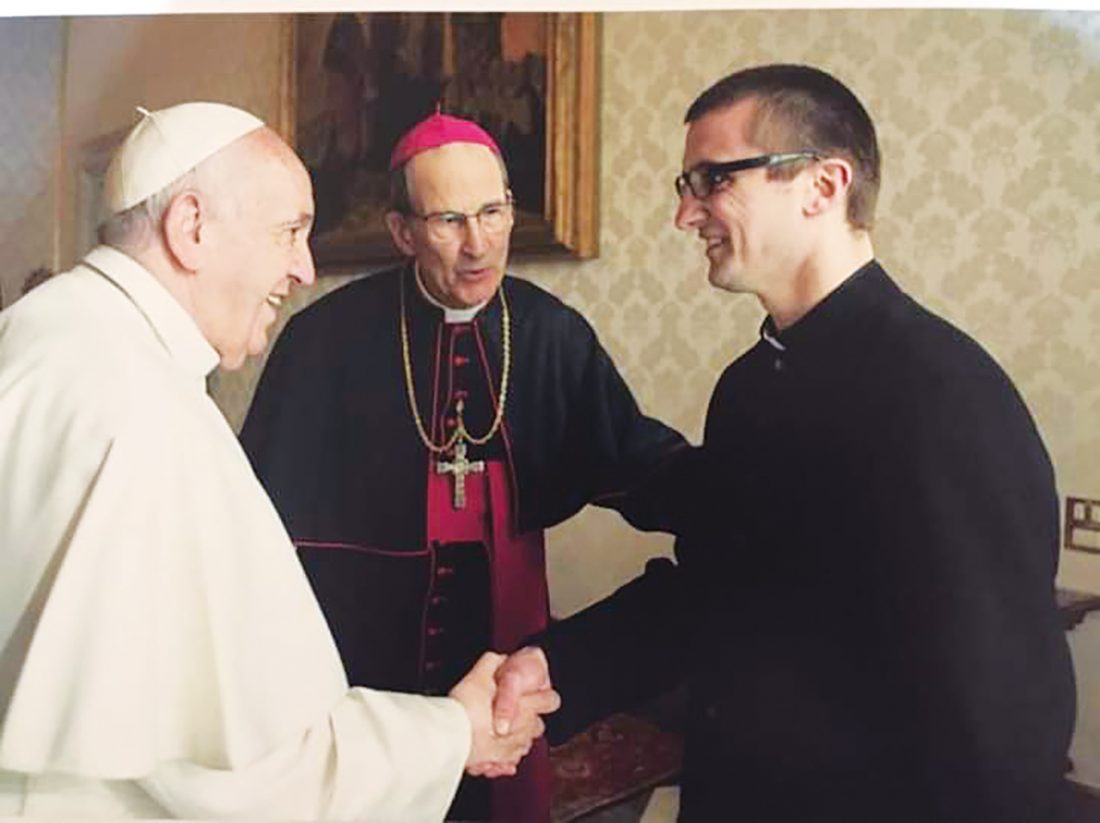 Deacon Shawn Polman is back in Minnesota now, but maybe his spirit is still in Rome. Polman, the son of Ronald and Jean Polman of Cottonwood and 2012 graduate of Lakeview Public School, spent the month of January in Rome as part of a class of 13 deacons who are set to be ordained to the priesthood.

A highlight of the month was visiting the Vatican and meeting Pope Francis.

“I was really nervous in the moments leading up to meeting the pope,” Polman said. “It was hard to realize that this was real.”

His impression of the pope was that he was “a really gentle person,” he said, noting the Pope Francis has a “firm handshake.”

After shaking hands with the visitors, Pope Francis spoke via a translator to a large group of about “50 to 60 seminarians,” Polman said, “it’s hard to believe there is a shortage in the United States of vocations looking at this large crowd.”

Pope Francis gave them words of advice and encouragement.

“He said never to lose our sense of humor,” Polman said. “He gave each of us a rosary and to say the rosary every day and said ‘always pray the rosary, it will guide your heart.'”

Also during the time period that Polman was there, U.S. bishops from Minnesota, North Dakota and South Dakota participated in their “ad limina” visit to Rome Jan. 13-17 including Bishop John M. LeVoir from the New Ulm Diocese.

During their visit the bishops prayed at the tombs of Saints Peter and Paul and met with the pope and Vatican officials to discuss church issues and the highlights of their region.

According to The Prairie Catholic January/February newspaper, “the trip is required by the Church’s canon law,” and “is known as the visit “ad limina apostolorum” a Latin phrase referring to the tombs of the great Apostles Saint Peter and Saint Paul, both martyred in Rome in the first days of the Church, and at whose tombs the bishops spent time in prayer as an essential part of their visit.

Polman said the Vatican is the safest place in the world.

“The Swiss Guard is in every hallway, around every corner we turned, there was another Swiss Guard,” he said. “We went through room after room and walked down quite a few hallways.”

Polman attended classes about the missionary aspect of the church during the week and the weekends were free to explore. He said he felt a special connection to Rome.

“I didn’t know the language, but I felt at home,” he said, especially visiting St. Peter’s Square. “I felt a sense of peace.”

One day, while trying to find certain churches, he got lost. “I had a general idea where they were at from our hotel, but I got lost in Rome,” he said. But he always felt comfortable, despite not knowing the language.

To get oriented — and back to his hotel — he looked for the top of the dome of St. Peter’s Basilica off in the horizon.

“I walked toward it because our hotel was a block or two from St. Peter’s and everything is around St. Peter’s,” he said.

“There are a lot of people and it’s noisy, but I felt peaceful,” he said.

He visited churches and places that he had “heard about and read about,” so it was an odd feeling when he was actually there.

He visited Nettuno, Italy, which is near Naples, on the coast of the Mediterranean and went to the Church of St. Maria Goretti. He also went to San Giovanni Rotondo, which has the Shrine of Padre Pio, who was an Italian monk, and is now venerated as a saint in the Catholic Church.

During his last week in Italy he visited Assisi, as in Francis of Assisi.

“Assisi is a small town, quiet, peaceful. It’s up in the mountains in an out of the way spot so not many tourists go there,” he said. “We were there on a week long silent retreat to help us prepare for the last semester in seminary and ordination.”

At each church he was mindful of the people who have supported him at seminary school. He attends the Saint Paul Seminary, St. Paul and plans to graduate in May.

“I prayed for everyone who has supported me over the years,” he said. “My heart was filled with gratitude.”

The next step for Polman will be ordination to the priesthood the first Saturday in June.