Kyle Murphy learns how to build a canoe while in high school, now he’s launching a naval architecture career 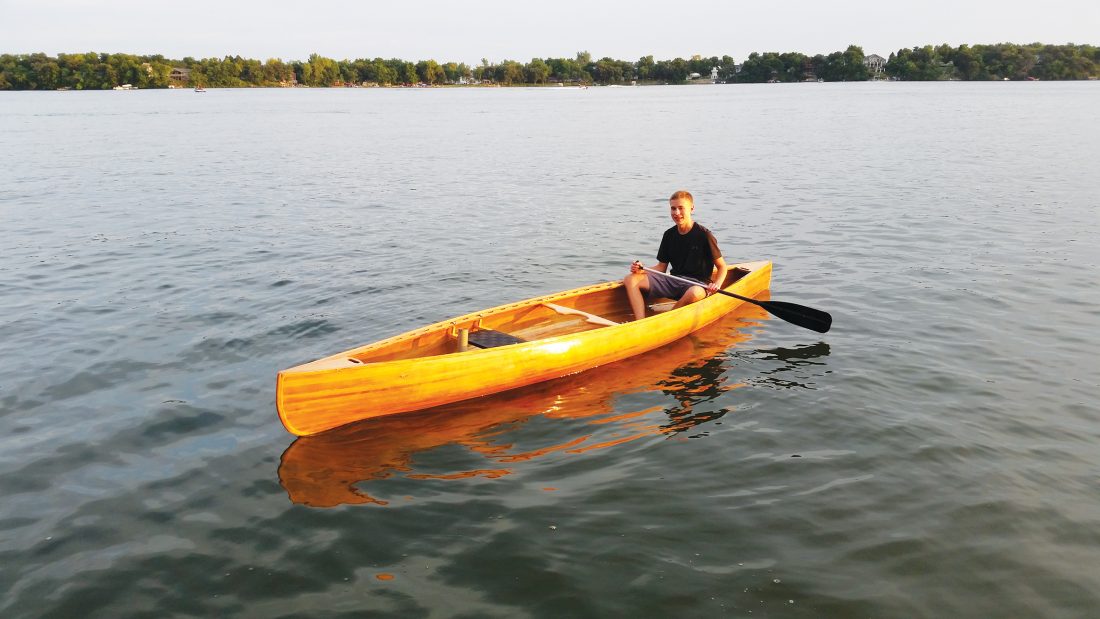 From LEGOs and Popsicle sticks to constructing his own canoe, 2019 Marshall High School graduate Kyle Murphy has taken his love of building things to a select engineering college in New York.

Murphy, the son of Sandy and Ken Murphy of Marshall, received a full-tuition scholarship worth over $200,000, to attend the Webb Institute in Glen Cove, N.Y., on the north shore of Long Island.

Home for Christmas break, Murphy is glad to relax and take a break from the intense studies. He will have taken “140-something credits,” he said, by the time he is finished.

In January, for a paying internship, he will spend two months at a shipyard, in Mobile, Ala., not a bad place to be in the winter, he said. He will work at Austal, a global defense prime contractor and a designer and manufacturer of defense and commercial ships. Austal USA is the American branch of operations for Australian shipbuilder Austal. The facility is based on Blakeley Island in Mobile.

Next year, as a sophomore, in the winter he will be on a ship for two months.

This summer, he will spend in Marshall and get a job.

“Maybe the following summer I will get a job in New York,” he said.

In his junior and senior year he is expected to meet certain requirements in designing a ship — in a group setting and individually.

All the internships and classes will help him decide where he eventually wants to work.

“Any Navy shipyard or small firm, you can do research for the Navy,” he said. “Commercial ships are manufactured by South Korea, Japan and China.”

Murphy said he likes the school a lot and is meeting young people from all over the United States — his friends are from “California, Washington, Texas, and Florida.” When he is not studying, he plays games on campus — video games, board games and pool. On weekends he goes sailing.

“The school has a 420 sailboat dinghy on Oyster Bay,” he said.

There are only about 100 students in the whole school — about three-quarters male and one-quarter female, a slightly better than average ratio for engineering students, he said.

He figures constructing a canoe helped get him into the school as well.

Alison Marshall, an MHS mathematics teacher, enjoyed having him in her class. She aided in Murphy’s application process by writing a letter of recommendation.

Among her other comments Marshall wrote, “(i)t has been my privilege to have Kyle Murphy as a mathematics student in pre-calculus. He has continued to take rigorous coursework, including AP calculus, AP European history, and AP U.S. history and CIS classes at Marshall High School.”

Marshall noted in her letter that Murphy’s “GPA and class rank have him in the top 3% of his class… He is a great thinker with strong critical thinking skills. He is not intimidated by challenges and, in fact, seems to be motivated by a difficult problem…Kyle has also been a top competitor in computer animation and his work with Business Professionals of America.”

As a finalist at Webb, he had to stay overnight at the school and take two tests — one English and one math — and submit to an interview.

His childhood interests led him to pursuing naval architecture. As a kid, Murphy liked building things out of Popsicle sticks and also playing with LEGOs.

He built a canoe out of western red cedar the summer before his junior year in high school in the family shed. He learned how to do it by watching YouTube videos.

His dad helped out a little on cutting the strips and providing an extra pair of hands as needed, “but I did most of it myself,” he said.

He was happy with the result.

“There was a couple times where I made a mistake, but then I just thought of a new way to make it work,” he said.

“I’d say it took me about 300 hours,” he said. He didn’t work on it during the year but then finished it up the following spring.

Murphy’s father is Ken Murphy, a physics professor at SMSU, and his mother is Sandy Murphy, a pharmacist who owns GuidePoint Pharmacy in Marshall. His older sister, Kayla, attends medical school at the University of Minnesota.