Homecoming is a chance for alumni to cheer on the Mustangs, reminisce with old friends, revisit old hangouts and support their alma mater 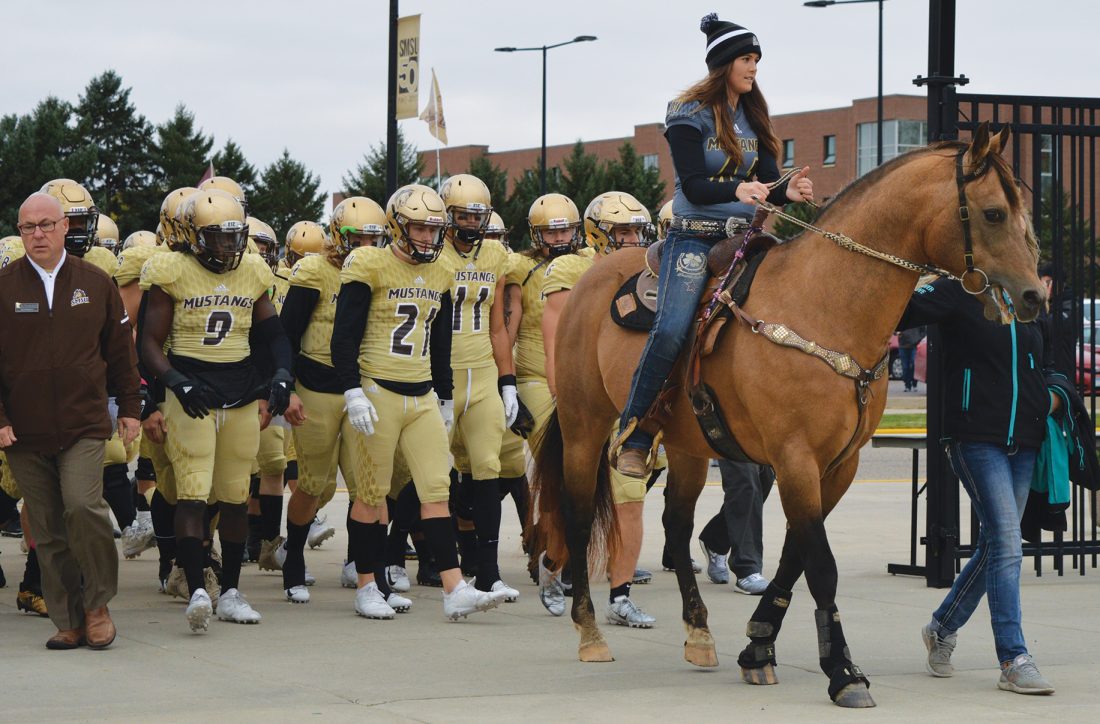 If you think homecoming activities at Southwest Minnesota State University happen at the spur of the moment, well Mike Van Drehle, alumni relations director and executive director of SMSU Alumni Board, is already planning Homecoming 2020. For the record, it will be Oct. 10, 2020.

As far as Homecoming 2019, the week has been filled with a plethora of activities, starting with a doughnut drop on Monday.

“We made over 500 doughnuts from scratch. We set up at Bellows Academic because it’s a high traffic area on campus so we could get students on their way to class or from class,” said Van Drehle. “(Campus food service) Chartwell’s provided milk and coffee.”

Van Drehle said the doughnut drop was a way to let students know this was a special week — homecoming.

“It just brings awareness and brings excitement,” he said.

The doughnut drop was one of many homecoming events.

“We have 38 events this week and into the weekend,” he said. “We try to reach as many different groups as possible.”

Most events during the week are geared toward current students and the weekend is more for alumni.

“Typically we have a really good turnout,” he said.

Something new this year is the “Swimming Social” from noon-1 p.m. today at the SMSU pool.

“We’re launching the women’s swimming and diving team,” Van Drehle said. “(Today) is the first home meet. Past swimmers can come to the reception prior to the meet to meet the women and coach.”

For Melissa Scholten, SMSU Class of 2007 and the Career Services director at the Center for Civic & Community Engagement, homecoming is a special time of year.

“Homecoming is a really fun time of year for students on-campus and alumni returning home,” she said. “One of my favorite memories was seeing my friend, Ryan Hugh Ross, honored as the Graduate of the Last Decade during the 50th anniversary homecoming. Ryan is an accomplished opera singer who resides in Cardiff, Wales. During his visit, he sang the national anthem at the football game and performed with the Southwest Minnesota Orchestra during a Sunday concert.”

Van Drehle is also an alumnus Class of 2008.

“What I always enjoyed as a student was just the excitement on campus,” he said.

A couple of new events this year, Van Drehle said, are the golden ticket discount and the Mustang Pub Crawl.

Alumni can present a golden ticket and wear SMSU apparel and save 15 percent off one item at participating Marshall downtown businesses.

“It’s a way to shop downtown and support the brown and gold,” he said.

The ticket is online at https://www.smsualumni.com/HomecomingSchedule and physical tickets can be picked up at the Marshall Area Chamber of Commerce and area hotels.

Also to get people out and about in the community is the Mustang Pub Crawl, from 6 p.m.-midnight in downtown Marshall. Participants will get a ride there and home, a T-shirt and a mug. They’ll also get a passport to win prizes such as a Sleep Inn room for Homecoming 2020, season tickets to next year’s Homecoming game, and apparel from local businesses.