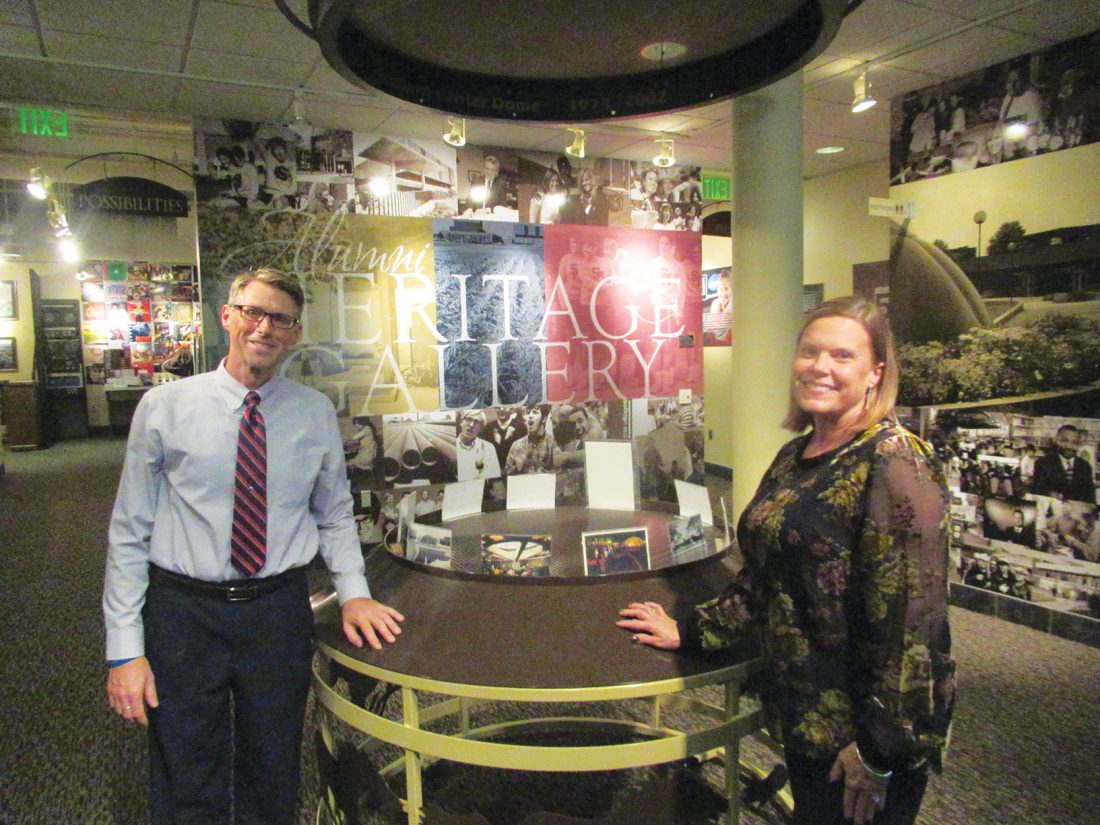 Southwest Minnesota State University Communication Studies Director Mark Fokken and SMSU Director of Development Stacy Frost are two of many contributors to the SMSU Alumni Heritage Gallery on the upper floor of the Student Center.

The Alumni Heritage Gallery at the Southwest Minnesota State University Student Center is something to seek out if you want a better idea of what SMSU is all about.

It’s almost impossible not to notice, however, for anyone who’s ever spent at least one semester at SMSU in any capacity. Sooner or later it gets the attention of students, professors, administrators, support staff, alumni and frequent visitors.

The gallery got its start during the process of expanding the student center. The process took place out of necessity, following a major fire in January 2002. It destroyed three buildings — the original dome-topped student center, the original Food Service East building, and the newer Student Center West conference center.

Smoke damage occurred throughout the mostly interconnected campus, with the least amount in the northernmost Social Science building and steadily greater damage closer to the source of the fire — a hot welding slag that was part of a Food Service East holiday break maintenance project.

SMSU Director of Development Stacy Frost, who chaired the original Alumni Heritage Gallery committee, said the concept took root in the process of deciding what to do with a medium-sized corner space on the new Student Center’s upper floor. Options were limited because it was definitely a corner, and because it was not entirely modular.

“We had this unique space,” Frost said. “It was a challenge but also something that could become an opportunity. We wanted to do something unique with it.”

A majority of that corner was transformed into the Alumni Heritage Gallery. The eastern portion, which has plenty of morning light, became a meeting area that can accommodate small to medium-sized meetings or workshops.

The foremost goal for the establishment of the gallery was to chart the gradual changes at SMSU since its inception.

Installments of a fully researched chronology were placed at visible locations along the standard touring path in the gallery space. Exhibits around the perimeter closely reflected campus history from its beginning to what was then present day.

Frost said a somewhat different focus resulted from a planning process intended to update the gallery for SMSU’s 50th anniversary in 2017.

She said that shift was shaped with input from original gallery committee member Andrea Hess and SMSU alumnus Jennifer Andries. Both have professional museum curator experience. Hess is currently the Lyon County Historical Society board president, and Andries has served as the LCHS executive director since 2012.

“They’re experts when it comes to museum design,” Frost said. “They recognize possibilities for what to do with a wall, when exhibits should fan out, when an exhibit should be interactive and when it shouldn’t. That was very helpful for building on the original goals.”

Andries said she enjoyed building on what had already been done with the gallery, both because of the ability to use her professional expertise and her personal connections to SMSU.

“One of the things we’ve wanted to do is connect the history with individual people, to show examples of how SMSU played a role in their lives,” Andries said. “It adds a personal side to the story. That can help in having exhibits that connect with visitors.”

Frost, originally from Le Mars, Iowa, chose SMSU out of three top college choices since the University of Nevada Las Vegas seemed too far away and since many of her friends planned to attend Iowa State University in Ames, Iowa, which meant she might be less inclined to look for new friendships.

Her first job on campus was as a residential adviser and her second involved working in the college scheduling office for scheduling director Julie Hein.

She said many others who’ve contributed to the alumni gallery have similar SMSU connections. Among the many contributors are SMSU Information Officer and alumna Stacie Mulso and her husband, SMSU Vice President for Advancement/Foundation Executive Director and alumnus Bill Mulso; SMSU Director of Academic Commons and alumna Linda Nelson; SMSU and SMSU Assistant Director of Communications and Marketing and 1993 alumna Marcy Olson.

Originally from Winthrop, Olson said the alumni gallery never fails to make her think about the lasting legacy of SMSU at least for a moment when she walks past it, even if she’s on her way to an important meeting in the adjacent meeting room area.

“It’s a great place,” Olson said. “People who notice it often check it out, and I’m hoping more people will do that in the future. It’s one of SMSU’s many treasures.”

Organizers plan to update the gallery on a consistent basis. Two of the newest exhibit additions include a typewriter donated by SMSU alumnus Dick Jorgenson and a Mustang horse blanket donated by Warren and Ardella Quarnstrom.

Two of the newer exhibits are a bunk bed display that depicts how bunk beds were a standard feature in many college dorm rooms of the 1960s and 1970s, and a radio station display reflective of the KSSU campus station operated by Radio/TV majors.

He said several key components of the exhibit were rescued from the basement of the Social Science building.

The entire wall behind the exhibit is plastered with record albums that were the property of KSSU. The large black KSSU labeling insured that everyone would know they belonged in the KSSU studio.

“Vinyl meant a lot to college students in those days,” Fokken said. “Even though the radio station needed them, they tended to walk off or get borrowed and accidentally not returned. We wanted to capture all of that now, when nobody spins platters anymore.”

Frost said everyone who’s helped with the gallery in the past 15 years has kept the future in mind, with hope that looking to the past will help to indicate what SMSC/SSU/SMSU should aim for in the years to come.

“I’m very happy that admissions (the SMSU Admissions Department) is moving to the Student Center, right down the hall from the gallery,” she said. “If a prospective student has a chance to look at the gallery, I think it will leave a great impression.”