The ‘Gift’ of time together

The father-and-son team of Alan and Nathan Schuch turned a family bedtime story into an illustrated book. It’s a labor of love, they said. 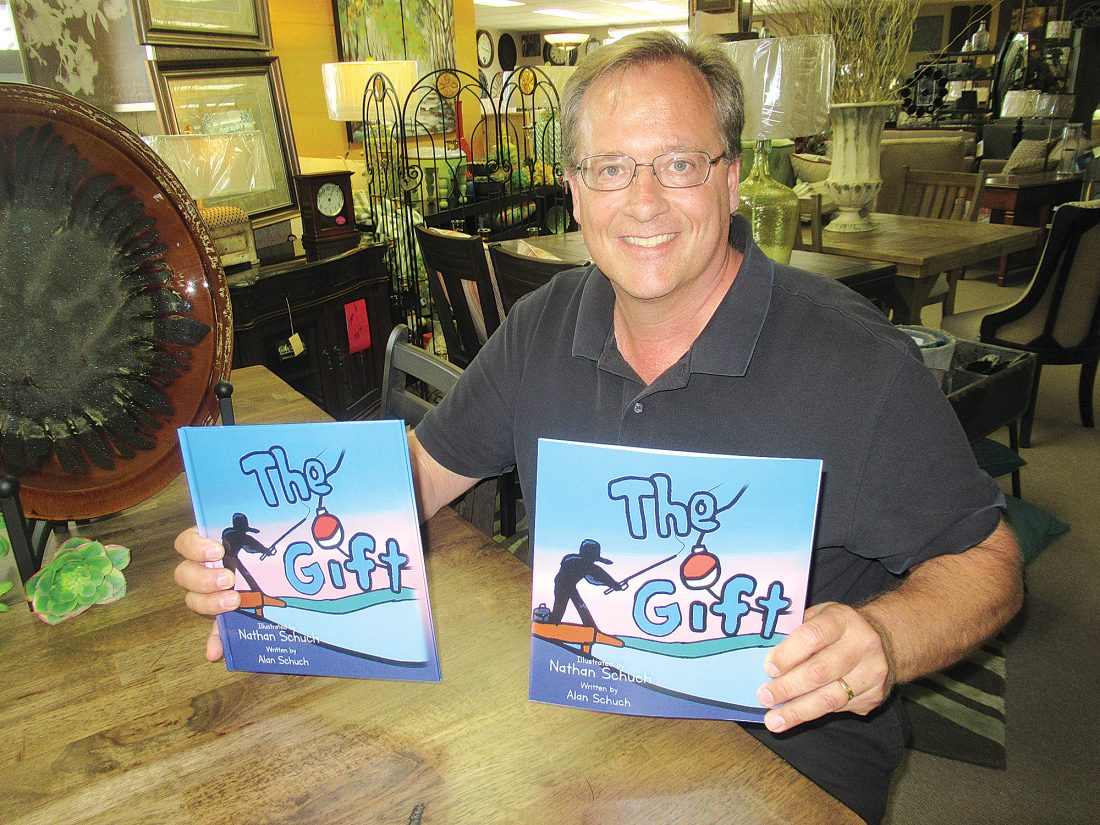 Photo by Deb Gau Alan Schuch holds copies of the hardcover and paperback versions of “The Gift.” The books are available for sale at a few different locations in Marshall.

It all started with stories, Marshall resident Alan Schuch said. When his children were younger, he used to make up stories for them before bedtime.

“They would give me five minutes to tell a story,” Schuch said. The improvised tales weren’t always winners, he said, “But some were just magical, it just worked out.”

Either way, the stories became part of the Schuchs’ family memories, and they stuck with Alan’s son Nathan Schuch, who is now 23. Out of about five of his dad’s best stories, “The one he really remembered most was a fishing story,” Alan Schuch said.

Now, Alan’s story really is a book, with color illustrations and a cover designed by Nathan. “The Gift” is about the relationship between a boy and his grandfather, and an unexpected birthday present that ends up bringing them closer together. The books are on sale in Marshall, and the Schuchs will be among several local authors at a meet and greet at the Marshall Area Fine Arts Council Arts Center later this month.

The book was a labor of love, Alan Schuch said.

“We both draw really well together,” Schuch said, and the fun part was just spending that time with Nathan.

“Time equals love,” he said. “As long as you’re spending time with someone, it’s love.”

“The Gift” took about two years to come together as a book, Alan Schuch said. Nathan Schuch sketched out all the illustrations.

“Everything is hand-drawn, and then he added color to it,” with the help of a computer, Alan Schuch said. On Alan’s side of things, the story went through a lot of editing to polish it up while still keeping things simple.

“I wanted to write it like I was telling a story,” Schuch said.

Alan Schuch said at first he wasn’t sure if he would find a publisher for “The Gift.” Then he learned about Lakeside Press of Willmar, which helped make the book a reality.

“They were just dynamite,” he said.

Now that it’s finished, “The Gift” is also a book with a cause. Nathan didn’t want to make money from the book, Alan Schuch said.

“He goes, ‘Dad, I don’t want to see a penny of it,'” Schuch said. Instead, the Schuchs plan to donate proceeds from the book sales to area programs helping people with disabilities. It’s a cause that means a lot to the Schuchs — Nathan has special needs, and has struggled with sensory issues, Alan Schuch said.

So far, “The Gift” has been more successful than the Schuchs expected. So far, they’ve been able to make one donation of a few hundred dollars to area programs that help people with special needs, Alan Schuch said. He hopes that they’ll be able to make more donations in the future.

“I really want to keep it local,” he said.

Schuch said he doesn’t know if there will be future collaborations from him and Nathan — some of his other stories would be harder to illustrate than “The Gift,” he said. But Nathan is currently working on his own characters for a comic book, Schuch said.

In a message on “The Gift’s” back cover, Nathan Schuch said the story was something more special than just a bedtime story.

“A memory we shared had turned into something much larger. Hopefully at the end of the story you’ll see things in a much more positive way,” Schuch said. “We hope you enjoy this story as much as we do. We couldn’t have made this possible without each other’s love and dedication.”

Copies of “The Gift” can be purchased in Marshall at MAFAC’s gift shop on Third Street, at Advanced Opportunities, or at Larson’s Home Furnishings, where Alan is a manager. People interested in buying a copy of the book can also contact Alan Schuch at alanshuch@charter.net.

MAFAC’s Meet and Greet event will be from 1-3 p.m. on Saturday, Sept. 21. Authors of books available at MAFAC will be there to meet members of the public and talk about their books. Some of the writers scheduled to be at the event include the Schuchs, Marge Barrett, Phyllis Cole-Dai, Lacey Louwagie, Judy Juhl Plank, Ruby Wilson, and James and Marianne Zarzana.