A mission of love

A group of Marshall area residents traveled to Guatemala earlier this summer to volunteer at the San Lucas Mission. It was an eye-opening experience, group members said. 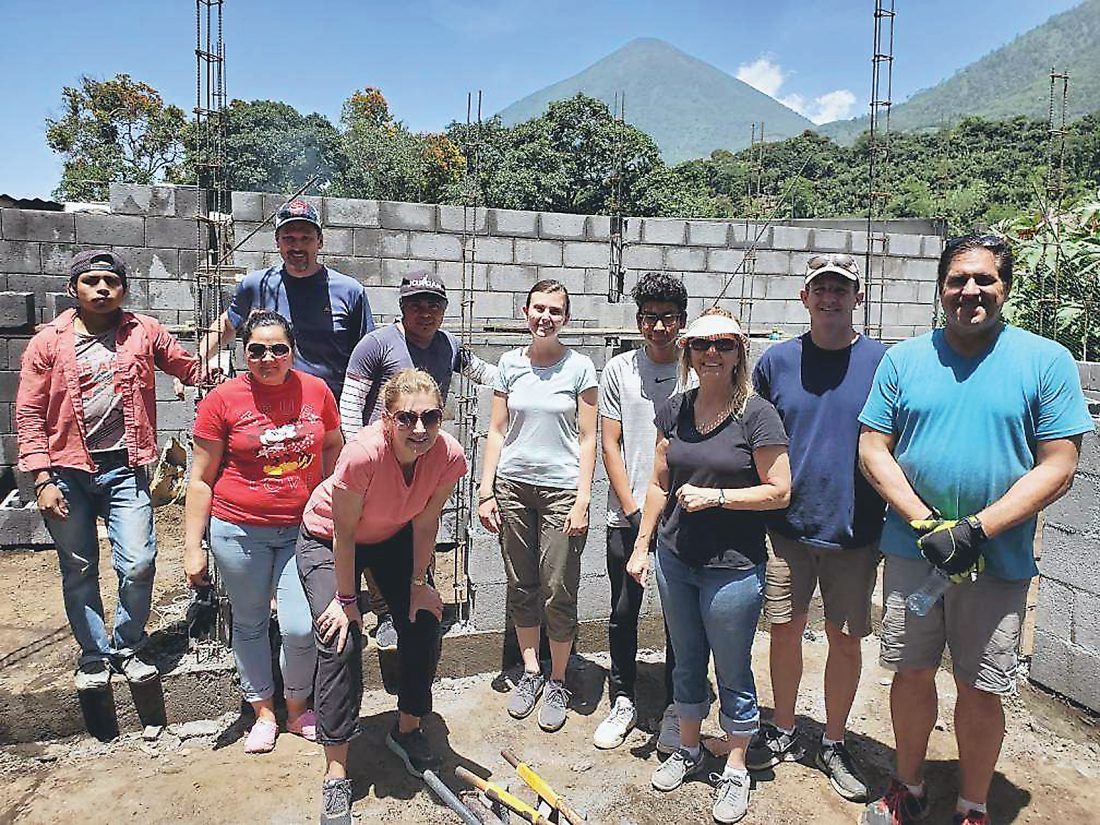 Photo by Deb Gau Volunteers on a mission trip to San Lucas Toliman in Guatemala posed for a photo at one of the construction sites they worked at this summer.

They were there on a mission — but the trip that a group of Marshall area residents made to Guatemala this summer was something that also changed their perspectives.

“I think we’re all feeling it right now,” Ron Stevens said. But the journey was worth it, added Lauren Mellenthin, another of the local residents on the mission trip.

A group of 22 people, including adults and youth from Holy Redeemer Catholic Church in Marshall, traveled to the San Lucas Mission in San Lucas Toliman, Guatemala, at the end of June. The group members spent about a week doing volunteer work, like helping the mission to build houses and provide for families in need.

“It was once in a lifetime,” Mellenthin said of the experience.

The mission has had a Minnesota connection since the 1960s, said group member Janelle Geurts. The Rev. Greg Schaffer, a priest from the New Ulm Diocese in Minnesota, began serving as pastor of the San Lucas Mission in 1963. In that role, Schaffer worked to help fight poverty and unjust disparities in land ownership. The efforts of Schaffer and the School Sisters of Notre Dame helped more than 3,700 Guatemalan families acquire farmland, the Friends of San Lucas said. Today, the San Lucas Mission has initiatives like a house-building program, a hospital and a school.

Holy Redeemer helps support the San Lucas Mission through sales of its Juan Ana coffee, which is produced by growers in San Lucas, Guerts said. But the chance to visit the mission and do volunteer work was a new one for the people on the trip.

While in San Lucas, the Marshall volunteers split into smaller groups to work with mission members in the house-building program. Volunteers helped with tasks like moving cinder blocks for construction, leveling floors and moving dirt.

“We went and did whatever they asked us to do,” group member Paula Meyer said.

Some of the construction work, like moving dirt, was tasks that would likely have been done with machines in the U.S., group members said.

The finished houses would be built of cinder blocks, or of a combination of blocks and wood, group members said. One of the houses volunteers worked on was for a family of nine people, who were living in a dwelling made of sheet metal with a dirt floor, Stevens said. The group met two of the children in the family while they were there. They were pretty outgoing, he said.

“The kids wanted to help,” and were pretty outgoing, Stevens said.

Another group of volunteers had an opportunity to go with one of the mission leaders to help shop for food and supplies for families in need.

“She led us through a very busy market,” with a lot of crowds, Meyer said.

“You could tell everyone went to the market,” Mellenthin said.

“We had about 12 American dollars,” which would buy a week’s worth of food for a family, Mellenthin said. Group members bought basics like rice, corn, beans, cooking oil, and laundry soap.

Poverty was something many people struggled with in the San Lucas area, group members said. A lot of agricultural work in the region was seasonal, so families often didn’t have a steady source of income. Group members said they also learned that employers like coffee plantations could exploit workers. A history of inequality and unrest in Guatemala, including a civil war that ended in 1996, have also impacted the people in the region.

“I don’t think any of us realized the amount of civil unrest that went on in Guatemala,” Guerts said.

The mission trip wasn’t all work. Members of the Holy Redeemer group got to learn more about the culture and history of the people in the area. Some of the Marshall volunteers even went with fellow group member the Rev. Samuel Perez to visit Perez’s family — although the steep trail they took to get there was a challenge, Geurts said.

The people the group met on the trip left an impression.

“They don’t have a lot, but they’re so happy with what they do have,” Meyer said.

The appreciation people in San Lucas showed for the volunteer groups was a humbling experience, Mellenthin said.

“One man said, ‘You could be on vacation,'” Mellenthin said. The fact that the group came to work instead meant a lot to people at the mission, the man told volunteers.

“It is an amazing, amazing feeling,” she said.

After learning about all the work Father Schaffer did, Stevens said, “I have to think about how I spend my time.”

Group members said more information on the San Lucas Mission, including how to order Juan Ana coffee, can be found online at sanlucasmission.org.