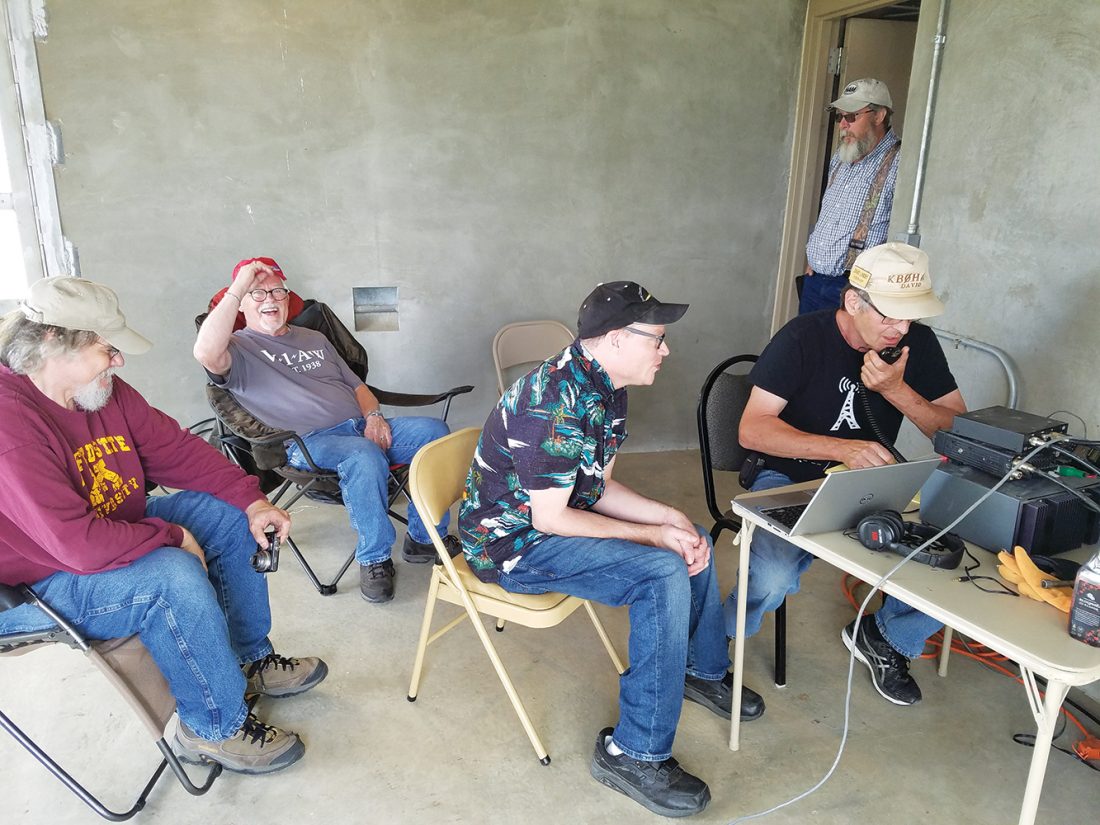 Photo by Mike Lamb Members of the Marshall Area Amateur Radio Club watch as President David Landby makes contact on a ham radio with other operators during Field Day on June 22.

“X-Ray,” David Landby says in a clear voice into the hand speaker that is connected to a ham radio sitting on a card table.

Landby picks up chatter from the radio and responds.

Then some more chatter from the radio.

The response he picks up confirms what he was hoping for.

“What state?” asks one of the members from the Marshall Area Amateur Radio Club.

Four members of the club huddle around Landby and the ham radio on the top floor of the five-story training tower next to the Minnesota Emergency Response and Industrial Training (MERIT) center in Marshall. Landby is wearing a brown cap with his name and call sign, KBOHAP, in the front and also pinned to the side. The other club members huddled around him and the radio are also wearing their unique caps with their call signs on them.

The radio is connected to a 6-foot tall antenna above them on the roof of the tower.

Landby was reaching out on the ham radio to anybody who would respond. It was all part of Amateur Radio Relay League Field Day 2019 across the United States and Canada was on June 22-23. The ARRL was expecting more than 35,000 radio amateurs to participate in an informal contest.

“We are making contacts. We just exchange a brief amount of information — the call signs the station we are calling and identify them,” Landby said. “This is the club call sign WOWX. There is actually a couple clubs involved here in this. We are just making sure we can contact. We talked to Kentucky just now.”

Landby said the club also made contacts with Michigan, western Pennsylvania and northern New Jersey. He estimated by the time Field Day ended at noon Sunday, the club made nearly 200 contracts.

The American Radio Relay League (ARRL) is a national association for amateur radio in the U.S. Representing 170,000 FCC-licensed amateurs, according to press release on the Field Day event. The release claims Field Day is the single most popular on-the-air event held annually in the U.S. and Canada. The ARRL was expecting 35,000 radio amateurs to gather with their clubs, groups or friends to operate from remote locations.

According to ARRL, the amateur radio frequencies are the last remaining place in the usable radio spectrum where “you as an individual can develop and experiment with wireless communications.”

“It’s supposed to be, let say there is a disaster. This is practicing to make sure your radio works,” Landby said.

He and the other club members explained that the disaster could be a tornado with power lines down and cell towers damaged. They said ham radio operators can relay information for first responders or people trying to reach love ones.

Besides the importance of communicating during emergencies, club members also talked about the enjoyment of contacting other ham radio operators around the world.

“I talked to Moscow 10 years ago,” Landby said. “He was just outside Moscow and I was on the sunspot cycle and was on the mobile on my pickup. It wasn’t using Internet or anything like that. Anybody can communicate with Moscow on the internet. He spoke English well.”

Club member Jack Winter recalled the time he made contact with a radio operator in Belgium.

“He’s related to a guy here in Marshall. I checked on him (Marshall man) the next day. Got back on the radio the following night. Got the guy from Belgium again and said ‘oh yea, your brother-in-law Bob is fine. He says he’s sorry he hasn’t been able to get a hold of you.'”

“He’s over there in Belgium. We talked like he was right here. The conditions were just right and we were talking just fine.”