Participating in math team and robotics at MHS paid off for JP Rabaey. The principles he learned came in handy in his summer job of working in the world’s second-largest particle accelerator lab. 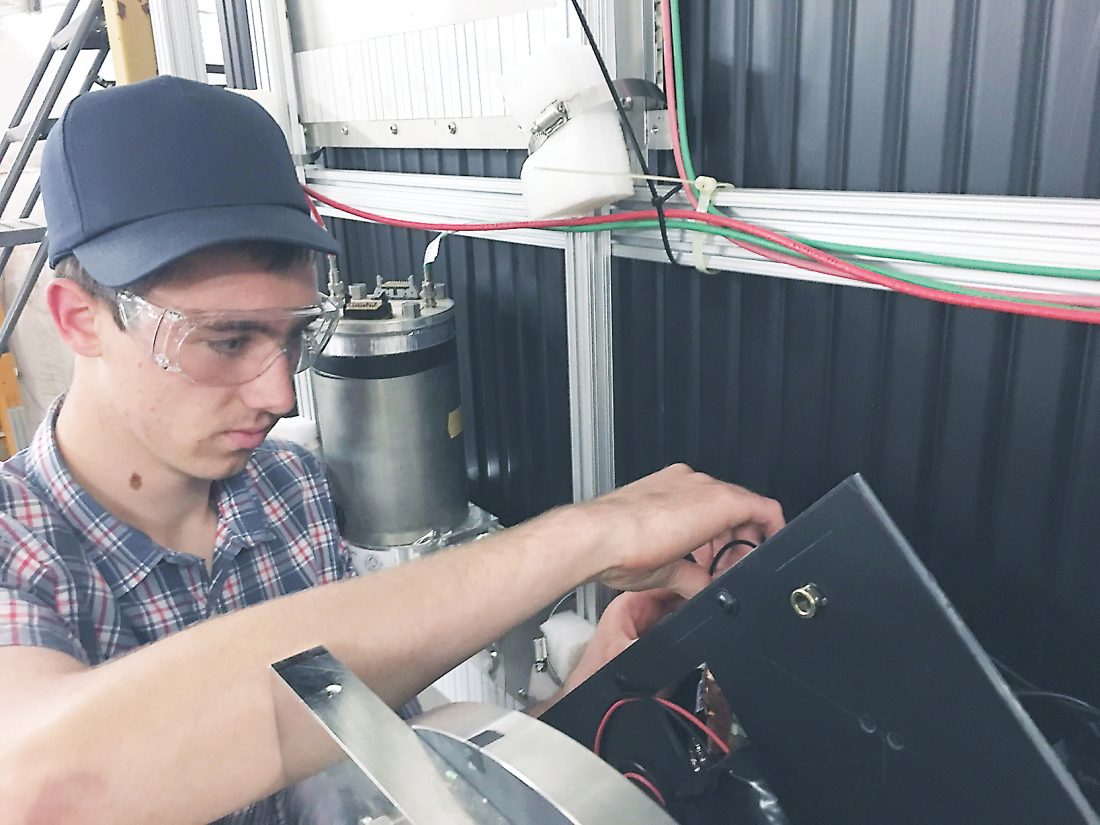 Submitted photos JP Rabaey, wearing safety goggles, is shown at work at Fermilab, a laboratory for particle physics and accelerator research. One of his tasks involved building a “trigger,” a device that would tell other, more complex detectors when to start taking data. A two foot cable, for example, is labeled “3 ns,” the time it takes for an electric pulse to pass from one end of the cable to the other.

John “JP” Rabaey, Jr. can write quite an essay on “How I Spent My Summer” when he gets back to school in the fall at the University of Dallas.

Rabaey, the son of John Sr. and Jennifer Rabaey of Marshall, is spending the summer doing research at the Fermi super-collider near Chicago. Fermi National Accelerator Laboratory, located 40 miles west of Chicago in Batavia, operates the second largest particle accelerator complex in the world. The largest is CERN, European Organization for Nuclear Research, in France.

Fermilab is a laboratory for particle physics and accelerator research, funded by the U.S. Department of Energy.

The budding scientist recently spoke to the Independent by phone from Batavia, Ill. He said he was eager for the opportunity to work at the Fermilab.

“It’s really exciting to work with some of the best equipment in the world,” he said. He started working May 22 and will work through July. With the group that he is in, there are a “couple people who just got their Ph.D. and some who are working on their Ph.D. and three undergraduates.”

Rabaey graduated last spring from high school and enrolled at University of Dallas in Irving, Texas, where he made the dean’s list. He said he chose UD because it is a Catholic college and he had a scholarship and it has a “very strong” science program, he said.

Rabaey’s secondary education was comprised of homeschooling, Marshall High School classes and he also took classes at Southwest Minnesota State University as part of the Postsecondary Enrollment Options program. He also participated in the math team and robotics team at MHS.

“Both of those were really, really helpful,” he said.

The PSEO physics classes at SMSU that he took as a junior, Advanced Placement physics and being on the math and robotics teams qualified him to attend a sophomore level quantum physics at the University of Dallas. That class led one of his UD physics professors, Dr. Will Flanagan, who works at Fermilab in the summers, to invite him to work there. Rabaey said he usually takes one or two students from the department with him.

“He liked the way I performed in class and invited me to come with him this summer,” Rabaey said.

“That’s an incredible place to work,” he said. “I’ve been there several times. They only hire the best and brightest.”

Murphy was impressed with Rabaey as a high school student.

“I had JP in my university physics class a couple years ago,” Murphy said. “He was a PSEO student. He was outstanding in every respect. He had a firm grasp of very complex physics concepts and theories. I found him to be very well rounded and excelled in speech, music, mathematics, and science. I thoroughly enjoyed him in my classroom.”

Rabaey is among the almost 1,000 university students who participate in research and programs every year. Fermilab pioneers the research and development of particle detection technology and scientific computing applications and facilities, according to the website, http://www.fnal.gov/.

“Essentially, the goal of experimental particle physics is to observe the smallest things in the universe,” Rabaey said. “A particle accelerator, like Fermilab’s, allows physicists to get particles up to high speeds — say, about 186,000 miles per second — and then smash them into a target.”

“To get particles up to that speed, practically up to the speed of light, it takes a lot of energy and a lot of space,” he said. “At Fermilab, we have thousands of magnets in miles-long, ring-shaped tunnels, all helping to send a concentrated beam — think of a laser — of extremely high-energy particles straight toward the enclosure where I work.”

Rabaey said the lab takes “great precautions to make sure the particles don’t get sent into the enclosure while someone’s working there.”

Rabaey’s focus is on neutrinos.

“The experiment that I work on, NOvA, is focused on observing neutrinos — the least massive particles ever observed,” he said. “We shoot neutrinos from Fermilab to the Soudan Mine, up in Ely, Minnesota, where a giant detector full of oil ‘sees’ them. In one sense, the detector is essentially a huge camera, allowing us to take snapshots of these tiny particles — or at least, the tracks that they leave behind.”

Rabaey works on a test version of the NOvA detector which is “about the size of a minivan. We spray fast-moving, well-known particles (like protons and electrons) down a beamline, identify and characterize them, and then check the ‘snapshot’ from the miniature detector to make sure it agrees with what we already know about the particles.”

He’s had to get “hands-on” with the detector.

“Since the detector works like a giant camera, we spend a lot of time making sure that no outside light gets in to ‘wash out’ the photo,” he said. “I spent one afternoon lying on a platform above the detector, reaching between the boards of the platform to cover openings — ‘light leaks’ — with black Velcro.

“It’s quite a high-powered ‘camera.'”

“The detector takes photos continuously, sometimes millions of them every second, 24 hours a day,” he said. “The huge amount of data pouring out of the detector has to be processed efficiently by a large network of computers, and software regularly crashes. For this reason, someone has to be monitoring detector data continuously from a desktop in another room. I ended up taking a couple of shifts, including one night shift that lasted from midnight to 8 a.m.”

More than 4,000 scientists from over 50 countries use Fermilab and its accelerators, detectors and computing facilities.

“People are here from all over the world — Portugal, physicists from the Czech Republic — it’s really neat to be with people from all over,” he said.

It hasn’t all been smashing particles together for Rabaey. He has taken time to explore Chicago as well.

“It’s 40 minutes by car,” he said. “I bike 7 miles to a train station and then it’s an hour away, two hours to get downtown. I explore, see the sights. I went to the public library. I watched fireworks at Navy Pier. They put on a big show every Saturday.”