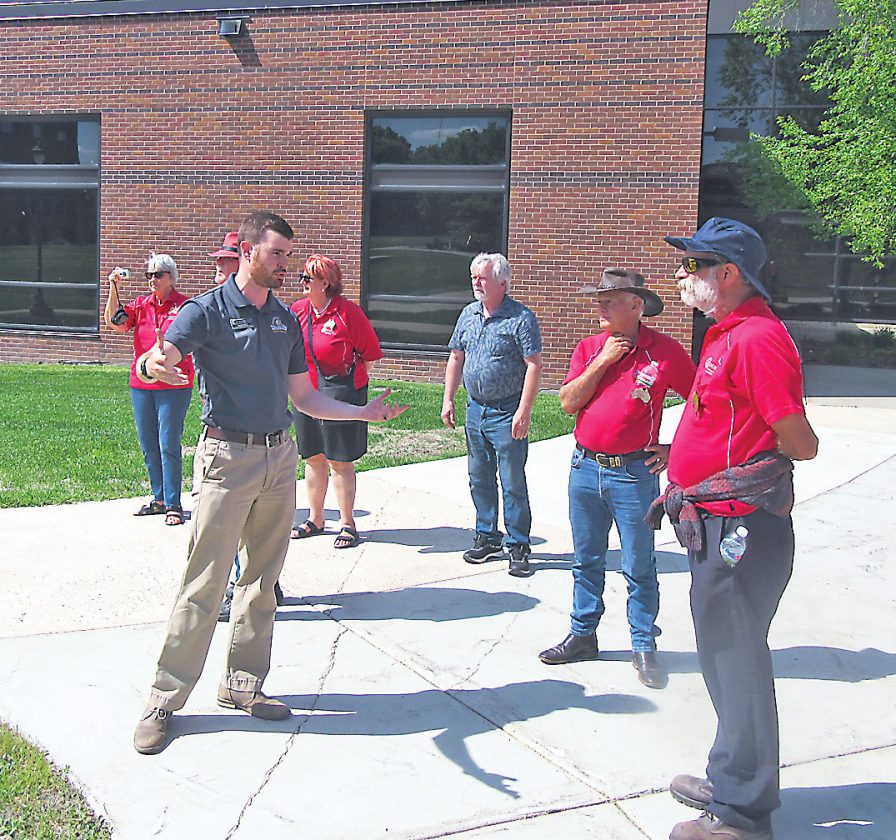 A group of Rotary International members from the Land Down Under spent much of the past week exploring a large part of southwest Minnesota.

As part of a two-month tour of North America, the Australian club members made a stop-over in Marshall from Tuesday afternoon until Thursday morning. All of their activities were coordinated by members of both the Noon Rotary Club and Sunrise Rotary Club, each composed of Marshall area residents.

Local hosts picked up the Australian guests in Luverne after they spent several days with Rotarians from the Cherokee area in northwest Iowa.

They were then transported to Pipestone National Monument for a firsthand view of middle America’s quarry site for many Native American communities based on the Great Plains. Some of them, such as the Ponca, come from as far away as the Southern Plains in Oklahoma.

A trip across the Buffalo Ridge then led to Southwest Minnesota State University for a campus tour hosted by Sunrise Club member and SMSU business and economics professor Gerry Toland. The evening was spent with local Rotarians who served as host families.

Tuesday’s activities began with a trip to Balaton to see the aquaculture breeding facilities and greenhouse operations at the tru Shrimp and Ralco research center, formerly Balaton’s K-12 public school.

Next the Australian contingent toured Avera Marshall’s medical facilities and then the ActionTrackchair manufacturing plant in the Marshall industrial park. Late afternoon on their own in downtown Marshall was followed by a banquet organized by the two host Rotary clubs.

Their morning on Wednesday featured a trip along Minnesota Highway 68 through the Minneota and Canby areas to Gary, South Dakota, for a tour of Gary’s former School for the Blind, which is now a resort and conference center. They were met at that site by hosts from the Watertown, South Dakota Rotary chapter, who brought them to the next phase of their journey.

They took notice of the rural character found in the region’s counties, asking about details such as the unusually late start to the 2019 growing season.

At various stops, their questions led to further information about how host sites are tied to national and global economics.

Tru Shrimp Director of Operations Robert Gervais pointed to estimates that show more than 90 percent of all shrimp consumed in the United States coming from foreign countries. By taking advantage of local agricultural feed products and convenient shipping, the company hopes to acquire a steadily growing market share.

“There’s a very strong potential for expansions,” Gervais said. “We don’t have to create a market for shrimp. All that’s needed are a consistent product, a controlled production environment and affordable prices.”

A similar global connection was mentioned by Alan Macht of ActionTrackchair. The company distributes its assistive wheelchair technology in Australia and many other foreign countries, a marketing system that has its roots in local machine shop research.

Australian farmer Ian Klein said after Tuesday’s stops that the tour showed how companies based in rural locations can thrive with well-planned production.

“We’re seeing a lot of innovation here,” Klein said. “It shows what can happen when there’s enough imagination and the right kind of business plan.”

At the Tuesday evening banquet and joint meeting of the clubs, the Australian guests outlined their sponsorship of local nonprofit activities. All of the Rotary chapters represented are from the New South Wales coastal area, a short distance north of Sydney.

They concluded the event with a group rendition of the Australian song “Waltzing Matilda” with the lyrics “come a-waltzing Matilda with me.”

The saying was well-suited to the occasion since a group of Rotary members from the Upper Midwest will travel to New South Wales for the second part of the international exchange.

Two of Rotary International’s primary ways of promoting positive global relations are the club-based events called friendship exchanges and foreign exchange stays for young adults. This week’s activities were the first friendship exchange in a long time for both the host and guest chapters.

“This is a great way to see details of the host country,” said Australian Rotary guest Michael Tams. “We like to see more places than just the famous tourist attractions. The time goes by quickly. We spend a short amount of time in one place and then move on to the next.”

Tams, a horticulture specialist, bought a half dozen plant-related books for $2 apiece on Tuesday at the Marshall-Lyon County Library. He also assisted his host family, which included Sunrise Rotary member Deb Herrmann, with 2019 gardening plans.

At the conclusion of the Tuesday evening banquet, guests told the audience that they enjoyed everything about their stay in the Marshall area.

“It was a real eye opener for us,” said guest Trish Moore. “We learned about the region more than we’d hoped. Everyone was so friendly and so welcoming.”

“There was tremendous support from both our Rotary clubs and from the general public,” Rogers said. “Everyone was interested in meeting our guests. It turned into a great opportunity to introduce people from halfway around the world to our local area.”