A class from the past

Sack races, hopscotch, weaving — Marshall area students got to step away from their screens for a week and enjoy life as a pioneer during Pioneer camp at the Lyon County Museum 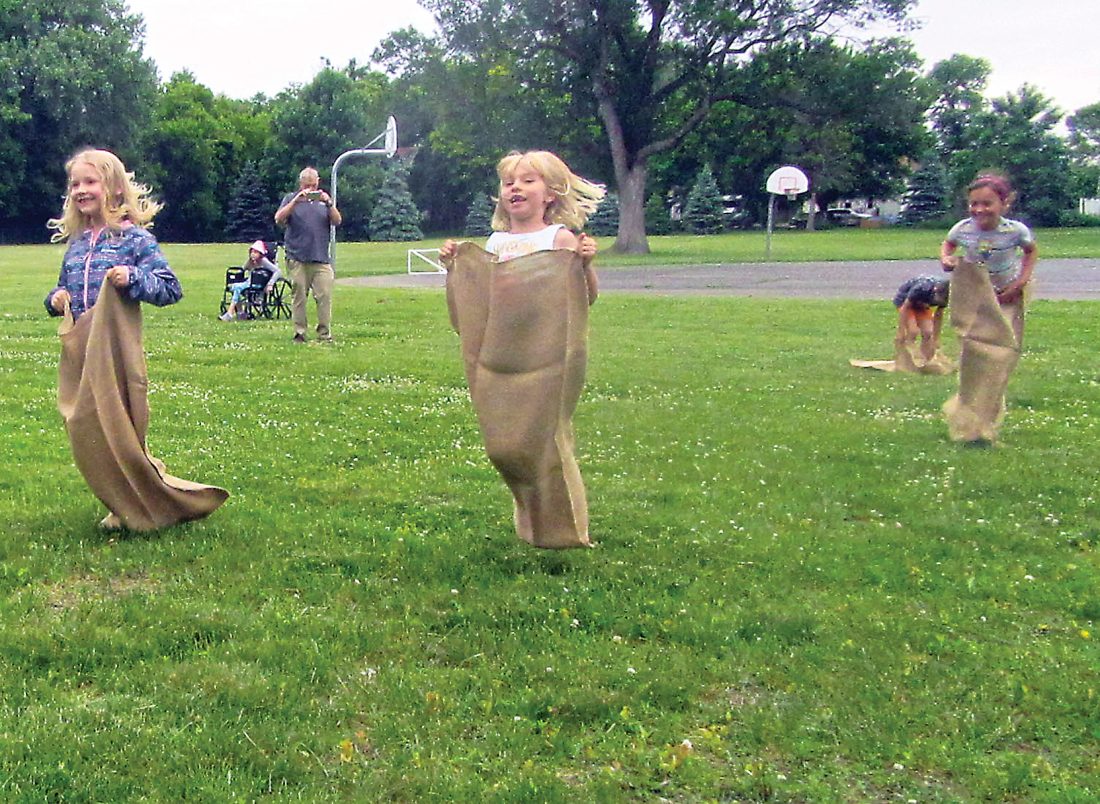 Photo by Jim Muchlinski Students in the pioneer camp race for the finish line in the sack race, which led to the door of the country school.

Country schools and log cabins, often thought of as symbols of the distant past, were at the forefront this week in Marshall during a week-long youth pioneer camp.

The Lyon County Museum hosted the program, designed for children in the upper elementary grades. It began Monday morning with a day of school that was far different from what happens throughout their 21st century school year.

It started off with outdoor games next to the historic red school house on the grounds of West Side Elementary. The structure was an actual early 20th century one-room country school in Westerheim Township, Lyon County, east of Minneota.

More than 50 years later, it stands at the edge of an open grass covered multi-purpose play space surrounded by trees that grow next to the Redwood River.

The games, planned to match the time period, had simple equipment but required plenty of skill and at least a little practice.

One of them is a traditional girls game based on the value of showing grace. It involves propelling a round wooden circle with two sticks, and has some similarity to the hand-eye maneuvers needed for crafts such as knitting or wool spinning.

“I liked the graces game,” said camper Emma DeGroot. “I’d never tried it before. It was fun to learn and to be able to make it spin in an arc.”

With the right kind of launch, the ring can travel in a perfect arc every time. The even trajectory makes it easy for someone’s partner to catch using the second pair of sticks.

The game was followed by two old schoolyard traditions that are still sometimes enjoyed in 2019. The first was a hopscotch game, one that included a beanbag that players would toss to earn points for successful hopping, reaching down to pick up the bag, and then turning around to hop back to the starting line.

Lastly, a burlap sack race brought campers to the door of the school. It was a close race from start to finish, as all participants kept up a steady pace.

“The hopscotch and the race were fun,” said Emma’s brother Christian. “I liked doing them fast.”

Inside the school, Pioneer Week instructor Lynn Bauer led the class through projects similar to what would have been taught many decades earlier.

Like many educational lessons, it involved learning more than just one subject at a time. A cutout art process provided simultaneous practice with colors and shapes along with more awareness of the subjects campers chose to create.

“It gives them a chance to imagine what it must have been like to go to school in the past day after day,” Bauer said. “They see that learning took place even though they didn’t have computers or television.”

The Tuesday session was based in the basement level of the three-floor museum building in downtown Marshall.

It started with a weaving project that campers completed with a little help from Bauer and Lyon County Museum Director Jennifer Andries. Besides learning the needed techniques, the class had to adjust to limited lighting like what pioneers often experienced.

That factor coincided with all the displays that make up the basement floor, which is centered around the pioneer era.

Major exhibit components include the historic log cabin that was constructed in the 1870s by Peter Flume with logs taken from the banks of the Yellow Medicine River in Nordland Township south of Minneota, a barn filled largely with hand tools, farm equipment surrounded by split rail fencing, and a covered wagon that was brought to Lyon County by the Rosvald family.

Several turn of the century displays feature themes such as the region’s first industries and kitchens that existed prior to rural electrification.

Bauer and Andries have teamed up on several summer camp programs. What started as a multi-themed camp with new subjects each day has been refined to explore one particular element of local and regional history in greater depth.

“We’ve worked to have as much detail as possible, and to include hands-on activities with materials that reflect the time period,” Bauer said. “We can purchase reproduction items up to a point. To round out the class, we look at what we have on hand and what we can find in stores that’s close enough to keep everything authentic.”

She said children who attend a summer camp about the pioneer era learn that daily life was very different in the past than what happens now.

Even something as basic as food could not be obtained from a grocer’s freezer. Cooking in a log cabin was not an option during the warmest months of the year.

Although life was simpler and much of the time more physically demanding, pioneers had enough ingenuity to build a way of life that ushered in many types of modern-day progress.

“The similarities with growing up were family life and sometimes having the chance to have fun,” Bauer said. “We try to draw on those connections as we plan camp activities.”

Camper Bella Hoff said the activities during the first segments of her week-long camp were adding up to a well-rounded look at what pioneer life must have been like for someone her age.