From building trails to rolling out a new bike share program, community members have put a lot of work into making Marshall a better place to ride 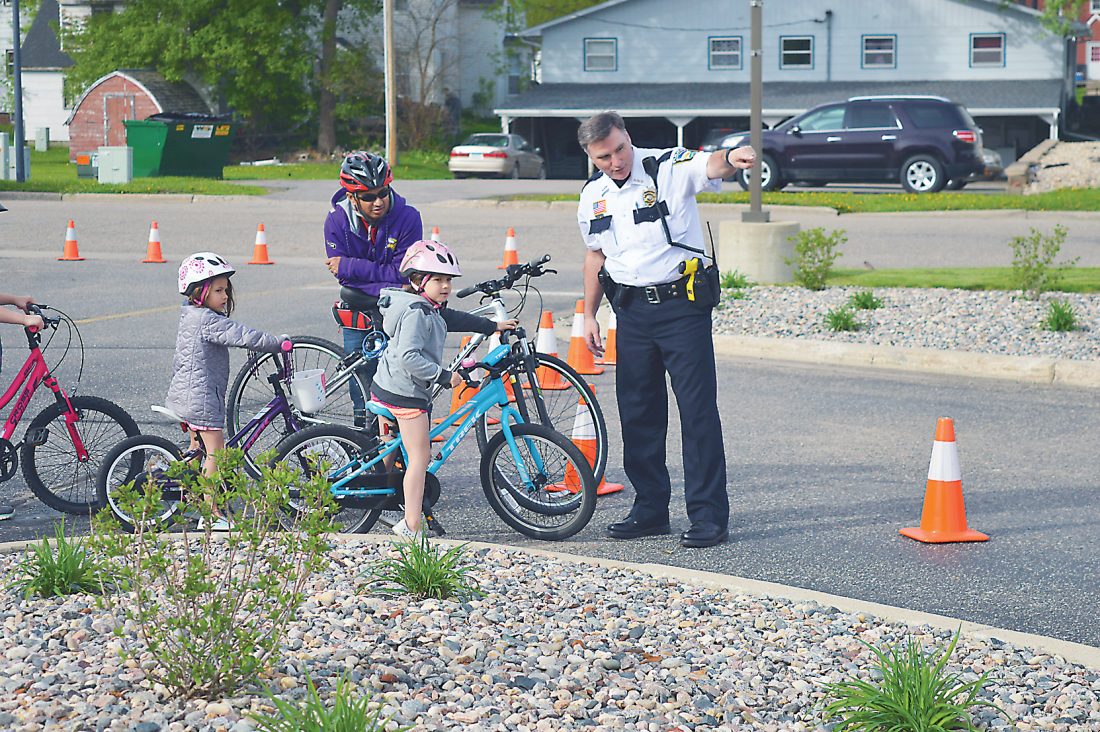 A sunny May afternoon was the perfect time to hit the trail — or at least it was easy to draw that conclusion from the number of bikes parked outside the Marshall Area YMCA. The line of kids waiting to take their turn on a bicycle safety course outlined with orange traffic cones snaked up the Y’s front driveway. Marshall Police officers explained how to signal turns and stops, before kids tried them out on the course.

“We go to the turtle park (Freedom Park) a lot,” Damle said. As Riya crossed the finish line of the safety course, he said, “It’s her first summer on a two-wheeler. She’s pretty excited.”

Cycling is popular for all ages in Marshall, and the community has worked to make biking safer and easier around town.

“Over the last 10 years, we’ve tried to be a community where people can be active outside,” said Marshall Mayor Bob Byrnes.

Byrnes said for the city, those efforts have included building wider sidewalks, paving recreational trails and adding bike lanes on some streets. The annual Bike Safety Extravaganza, held Monday, was one positive event for cyclists. The debut of a new bike sharing program in Marshall was another.

“I think it’s going to be a really exciting program,” said Chad Kulla, manager of the Bike Shop in Marshall. Kulla said there’s interest in cycling in Marshall area, and the Bike Shop sometimes gets calls from people asking about bike rentals.

Efforts to encourage biking, and help make it safer, go back years in Marshall. The Safety Extravaganza has been going on, under different names, for around 15 years, said Marshall Community Services recreation coordinator Cam Bailey. The city of Marshall, the Marshall Police Department, North Memorial Ambulance, the Marshall Area YMCA and the Bike Shop in Marshall have all helped put the event on over the years. Besides getting safety training, bike helmet fittings and trail maps, attendees can register their bikes with the MPD. The program helps police get lost or stolen bicycles back to their owners, said Marshall Public Safety Director Jim Marshall.

Marshall said the Safety Extravaganza is the biggest event of the year for the registration program.

“We get some at the National Night Out,” Marshall said. “But this (event) is more focused on bike safety.”

Monday’s bike share rollout was kicked off with a community bike ride along Saratoga Street, led by members of the Marshall City Council.

Amanda Beckler, community education coordinator at Marshall Community Services, said a total of nine bikes will be available to the public through the bike share program. Bikes can be checked out at no cost for up to one week, but a driver’s license is needed to check out a bike.

The Bike Shop, the YMCA, and the AmericInn in Marshall will be locations where people can check out bikes.

“It’s a benefit for the community,” said Tom Bolin, executive director of the Marshall Area YMCA.

Having bikes available to check out will be helpful for people visiting Marshall, Kulla and Bolin said. Marshall not only has city bike trails and bike lanes, but access to the Camden Regional Trail.

“That’s a phenomenal system we have,” Kulla said — and it helps people enjoy Camden State Park, which is located at one end of the regional trail.

“We hope this is something you enjoy,” Beckler told community members as the bike share officially kicked off.