Changing lives — one chair at a time 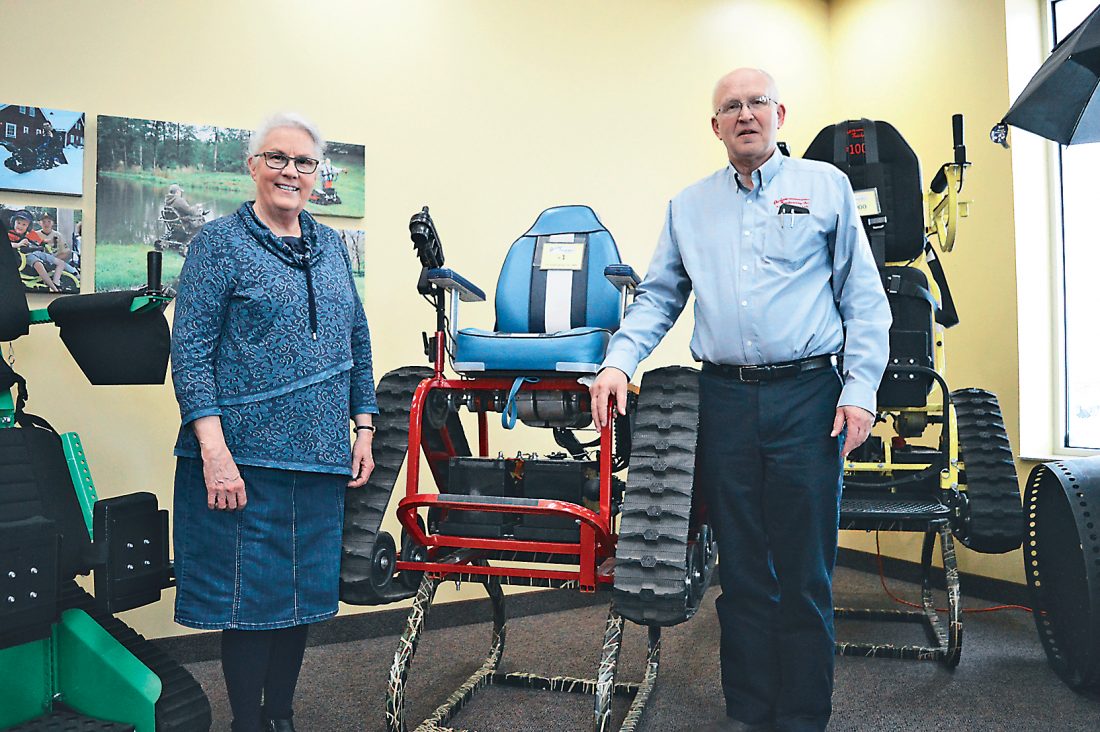 Photo by Jenny Kirk Action Trackchair owners Donna and Tim Swenson stand by the very first unit made 10 years ago.

Action Trackchair has been in the business of changing lives for 10 years — providing freedom, independence and mobility for its customers.

Reflecting back over the last decade, owners Tim and Donna Swenson, as well as employee Alan Macht, said real-life stories of people whose lives have been improved that has truly driven the business’s incredible success.

The Action Trackchair, an all-terrain wheelchair with tracks, was originally designed for the Swensons’ son, Jeff Swenson, who was paralyzed in an automobile accident in 1998, when he was 16 years old. The success sparked additional developments — ones that continue to progress even today.

“We thought we hit quite the milestone when we hit 100,” Tim Swenson said. “We didn’t know we’d do that many. We started building a concept of a wheelchair with tracks on it and it just went from one thing to another. We’ve made a lot of changes since then, obviously.”

Next month, Action Trackchair will have built its 4,000th chair.

“We’re selling them all over the world,” Swenson said. “We’ve got them in all of the continents other than Antarctica. And they’ve been for people from all different walks of life and age groups, including a lot of veterans.”

Donna Swenson noted that the original design was fairly simple, but has since progressed a great deal.

“It wasn’t over-engineered and it just took off,” she said. “It was just the sit-down model to begin with and then he developed the stand-up model. That’s the 1,000th chair.”

Alan Macht, director of sales and marketing, said Action Trackchair currently builds about 500 units a year and has 25 full-time employees.

“Obviously, the beginning years were a lot smaller numbers, but it’s continued to ramp up,” Macht said. “We’re very close to building our 4,000th unit.”

While giving a tour to a group of high school students from Marshall and Lakeview recently, Macht shared one of his favorite stories.

“There’s a Trackchair running around at an orphanage in Africa because there was a young lady that literally couldn’t control the movements of her arms and was totally dependent on someone to move her around,” he said. “We devised a system where she can drive it with her chin. She’s probably 14 or 15 years old and had never in her life moved herself from where she was to where she wanted to go without somebody’s help until she got the Trackchair.”

“There’s a tremendous amount of self satisfaction that comes from working with a product like this,” Macht added.

There are now thousands of similar stories.

“We get stories all of the time,” Tim Swenson said. “All of these people have their own story. There’s a reason why they’re needing a chair.”

Hanging on the wall in Swenson’s office is a canvas photo of Nick Vujicic, a motivational speaker who lives with his wife and four children in Los Angeles.

“Nick was born with no arms or legs,” Swenson said. “We built him a special chair. He’s got a couple of toes sticking out (at waist-level) that he can use to manipulate the joystick that we put down there. He drives all over the place.”

While the stories typically get back to the Marshall-based operation, Swenson said the distributors are normally the ones who deliver the chairs to the customers around the globe.

“We have seven distributors around the U.S. and then other parts of the world and a lot of them have many dealers,” he said. “So we have a lot of people representing Trackchair.”

While Swenson began thinking about designing an outdoor wheelchair after his son’s accident, it wasn’t until 2009, when the Swensons sold Action Sports, a motorsports and marine dealership, to their son, Jim and his wife, Teah, that he began to build the first prototype in his hobby shop.

“Jeff is 37 today (Feb. 26),” Swenson said. “He was 16 when he had the accident, so it’s already been 21 years that he’s been in a wheelchair. It changed his life. Then nine years later, Jimmy’s brother-in-law, Jason, was in a diving accident and he became paralyzed. That was 2007. So both Jim and Teah have brothers in wheelchairs.”

Swenson decided it was then time to kick his engineering efforts into high gear.

“He retired from Action Sports in 2009, so he had more time to think about it,” Donna Swenson said.

Swenson then pointed toward the window sill in her husband’s office, where a decorative block had the words “Think outside the box” written on it.

“That describes Tim,” she said.

Action Manufacturing Inc. was established in 2009, transforming Swenson’s hobby shop into a manufacturing facility. By 2014, 1,900 trackchairs had been built.

In 2015, Swenson and his employees designed a larger, more efficient and modern factory.

“All the steel fabrication is made here,” Macht said. “We buy components from other vendors for stuff we wouldn’t make, like the seating, for example. That comes from Sewn Products from Vesta.”

The Swensons said the trackstander was created because of all the benefits it has for wheelchair-bound individuals.

“Being able to stand up helps the skeletal system, the circulatory system, so they’re not just sitting all the time and getting sores,” Donna Swenson said.

All of the chairs go through rigorous testing and are built for rugged terrain. In 2017, when the entire Swenson family took a trip to Hawaii, Jeff Swenson was able to maneuver on the beaches because of an Action Trackchair.

“We sent a chair out there, so Jeff could be on the beach,” Tim Swenson said. “That’s really where those chairs work well is off-road — in the snow, mud and sand.”

Swenson said they now have a blade attachment for snow removal.

“We have a lot of people around the country pushing snow with their trackchairs,” he said. “One of our customers in Colorado put a blade on his and he goes around the neighborhood and pushes snow. He was just on ‘Fox and Friends.'”

Donna Swenson said the Colorado customer ended up bending the frame on the trackchair with the blade he attached.

“We hadn’t even thought of making a blade, but be thought we’d better design our own so that doesn’t happen,” she said.

Trackporters are another innovated creation that is now manufactured and sold by the company.

“We had a farmer come in and ask if we could make something to haul dead pigs using a trackchair,” Tim Swenson said. “So we did.”

Tru Shrimp also benefits from the engineering and manufacturing expertise of the Marshall business.

“We are working with tru Shrimp to build feeders for their shrimp operations,” Macht said. “We’re also developing another device for them that takes the new shrimp larvae and slowly stirs the tank to keep the larvae alive, so they don’t congregate in one area, and another device which is called a crowder that they’ll use at certain points throughout the growth of the shrimp. We have the technology here, we have the equipment here and tru Shrimp was looking for a partner to help them out. So far, it’s been a wonderful marriage.”

One of the newest avenues is the county, state and federal parks system.

“For instance, the Staunton State Park in Colorado, they actually have chairs there where people can call up and reserve a chair for the day, so a person can tour the park,” Tim Swenson said. “There’s getting to be a lot of that. We’ve sold some in Michigan, North Carolina, Florida, Kansas and Missouri. It’s one of the things we’re concentrating on more, to let the park systems know they’re available. There’s actually people that have been buying the units to give to the parks, too.”

Donna Swenson pointed out that there is a trackchair at Action Sports that area people can utilize.

“People can call up Action Sports and reserve the chair for a day,” she said. “Marshall Radio and Lockwood Motors bought it and it’s for taking people to Camden.”

Another recent focus is on getting two of the chairs to be FDA approved, with veterans especially in mind.

“A lot of our chairs find their way to disables veterans and that’s a good thing,” Macht said. “The trackchair and trackstander are phenomenal ways to help a veteran who has been injured continue on with a more normal life than what they would have had.”

Macht recalled one veteran who was overjoyed with the opportunities he now had because of his trackchair.

“He said if he didn’t have our product, he would be indoors all day long, fighting his labrador for a piece of the window glass to look outside,” Macht said. “One of the statistics that is very disturbing is that in our veteran population, there are about 20 suicides a day. That’s a tragedy that we somehow have to figure out a way to change. That’s one of the driving forces to why we’re going through the process of getting FDA clearance for our two units.”

In 2015, Donna Swenson and other area board members also started a public charity, Action Mobility Foundation. For more information, go to: www.actionmobilityfoundation.org.

The sky in April 2020 — the changing of the stellar guard