The gift of life

The thought of a young cousin feeling ill or worse inspired Balaton native Alyssa Kirk to get tested to be a kidney donor. Now Kirk is getting ready to donate a kidney and live her own life as healthy as possible with just one kidney. 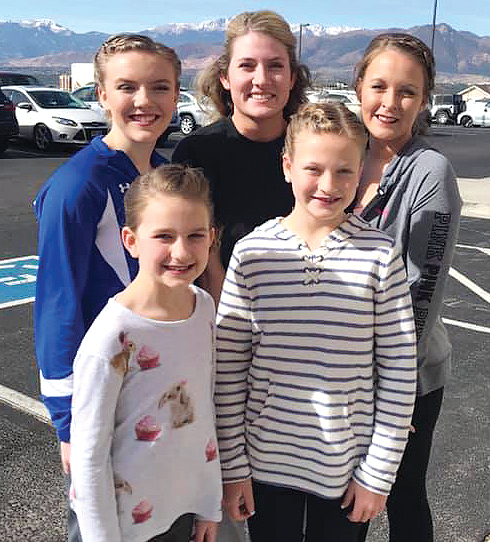 Submitted photo Clockwise from back left: Cousins Kaylee Kirk, Kara Lunsford, Alyssa Kirk, Kristina Lunsford and Braelynn pose for a photo together last March in Colorado. Six months after, Alyssa Kirk made the decision to be tested to see if she would be a match to donate a kidney to her youngest cousin, Kristina.

Balaton native Alyssa Kirk is willing to live the rest of her life with only one kidney to try and improve — and potentially save — the life of her 12-year-old cousin, Kristina Lunsford.

Lunsford has been on the donor list for a year and Kirk has undergone testing that spanned five months, but the two are now scheduled for kidney transplant surgery on Feb. 26 in Sacramento, California.

“I keep telling myself that it’s the best gift I can give her,” the 30-year-old Kirk said. “Kristina gets another chance at life. She’s had a pretty rough 12 years. Hopefully the next 12 are better for her.”

Kim and Jon Lunsford found out last February that their youngest daughter needed a transplant.

“She’s been through a lot in her young life, but they didn’t expect her to need a transplant already,” Kirk said.

While the doctors put Kristina on a deceased donor list, Kirk said the family also learned that a living donor could be a possibility — and that it’s one which typically provides a recipient with longer kidney function.

“At first, I didn’t think anything of it because I knew Kristina’s dad and older sister, Kara, were going through testing,” she said. “They can only do two at a time. But then Kara messaged me the day she found out she wasn’t a match. She was devastated. Their dad was also told, ‘No.'”

On the way to Omaha, Nebraska, for a wedding that August weekend, Kirk confided to her boyfriend, Jason Barnhard, that she was thinking of being tested.

“He asked if I was sure,” Kirk said. “I said, ‘What if something happened to her and I could have saved her life?’ If I tried and wasn’t a match, then at least I did what I could. So I did a bunch of research and I talked to a primary doctor to get her opinion because, obviously, I’d like children in the future. I learned that I could still have a long and healthy life.”

Over time, Kirk said she learned that when a kidney is removed from a living donor, the remaining kidney very quickly begins to take on more responsibility within the person’s body.

“Obviously, you’ll never get that kidney function of having two healthy kidneys, but when they take your weakest kidney and leave you with your strongest kidney, that kidney recognizes almost instantly that the other kidney was removed and it increases in size and starts producing at a higher level,” she said. “I think that’s amazing.”

Kirk said keeping her weight down and maintaining a healthy diet will be critical for her after surgery, especially with a history of diabetes in the family, but she’s already inspired by Kristina, who has been on a very strict diet for a long time. Kirk also has a supportive and knowledgeable partner in Barnhard, who is a certified registered nurse anesthetist.

“I’ve never had surgery, anesthesia or stayed over in a hospital,” Kirk said. “I’ve never even broken a bone or had stitches. So that’s my biggest thing — I don’t know what to expect. Jason has been huge, though, in calming me down and explaining to me what’s going to happen. I don’t think I could do it without him.”

“I had reached out to the University of California, Davis, and said who I was and that I wanted to go forward with testing,” Kirk said. “They sent me the blood vials in the mail. I went to Huron and had the blood drawn. They did a blood test to make sure we were blood matched. Then the second one was an antibody test, to make sure her antibodies were compatible with mine.”

Kirk flew out to Sacramento, California, near where the Lunsfords live, to have additional testing in November and in January. On Jan. 24, Kirk got the call she’d been waiting for — UC Davis confirmed that she was able to be Kristina’s kidney donor.

“Before I went out there for the final testing, I had shirts made for us,” Kirk said. “They say ‘Kidney Buddies for Life.’ I thought I’d find out if I was a match when I was out there, but they said it would be a week before we know. I didn’t want to tell Jon and Kim. I wanted it to be a surprise, too.”

Kirk said she had to let her Aunt Kim — who grew up in the Balaton area along with Kirk’s mom, Pamela — in on the T-shirt curveball. Lunsford agreed to hide the T-shirt. Then when Kirk received the call, Lunsford brought out a pink gift bag — with the shirt inside — while Jon Lunsford recorded the priceless moment on his phone.

“I wanted them to videotape her reaction, but I also FaceTimed her,” Kirk said. “She saw the shirt and started to cry. Kim asked her what she thought when I called and she said, ‘I guess I was expecting the worst, that she was calling to say she wasn’t a match.'”

Kirk said a date for the transplant surgery had already been selected prior to that.

“Since (the UC Davis Transplant Center) perform about 400 kidney transplants a year, we’d had it scheduled two months ago,” she said. “They tentatively put you on the calendar. They gave me six dates to choose from. So then I called my uncle and said, ‘Here are the dates’ and he started to cry.”

“Jon said, ‘That’s the best birthday present you could ever give me,'” Kirk said. “So we chose February 26.”

While the testing took five months, followed by several weeks of getting prepared for the big day, Kirk said it really didn’t hit her until she received her surgery schedule about two weeks ago.

Kirk said she’s been fortunate to have a lot of support from her employer, co-workers, friends and family.

“Everyone has been very positive about it,” Kirk said. “I’ve had a lot of people come up to me and say they’re praying for us.”

During the hospital stay, Kirk will be accompanied by her mom and boyfriend, while Kristina will have her parents by her side.

“I’m looking at a two-day stay in the hospital if all goes well,” Kirk said. “Then a month off of work. They say the first week is the worst, pain-wise. And a hernia is the thing they worry about the most, so you’re not suppose to lift much or strain your abs.”

Lunsford will have a longer recovery ahead of her.

“Kristina will be in the pediatric intensive care unit right away,” Kirk said. “Then they thought right around five days, depending on how her body responds and if it accepts (the new kidney). She’ll be on anti-rejection medication for the rest of her life.”

Kirk added that it’s likely that the 12-year-old will be out of school for nearly eight weeks.

“It’s just because of the germs,” Kirk said. “They don’t want her to get sick. They say she’ll feel good, but she can’t be in public for long periods of time. She can’t be out for supper or go to the grocery store.”

Kirk said Lunsford has had health problems since she was really little.

“She’s been sick for so long, and it’s not that she’s throwing up or has a bad cough,” Kirk said. “She just doesn’t feel good. It tugs on my heartstrings just watching her. You can tell she doesn’t feel good. And she’s 12. She should have all this energy.”

“Anything under 10 means dialysis,” Kirk said. “The doctors told Kim and Jon she could tip any day.”

Kirk said her own surgery is expected to take three and a half hours. While she’s praying for the best, she’s also had to prepare herself for the possibility that the donated kidney will be rejected.

“I had to meet with a social worker and psychiatrist who asked questions about how I’d react to donating a kidney to Kristina and having her body reject it,” Kirk said. “They also make sure you weren’t pressured into it, that it was your own decision to be a donor.”

“It’s awesome that Kristina is near one of the top kidney transplant centers in the country,” Kirk said. “They do about 400 transplants a year — and that’s just kidneys. They gave me a chart and it said over 99 percent were effective. Only one was rejected in a year.”

Kirk is optimistic that a new kidney will increase the quality of life for her 12-year-old cousin.

“After she found out that I was a match, Kristina told her mom that she can’t wait to wake up after surgery,” Kirk said. “Kim said, ‘What do you mean?’ And Kristina said, ‘I know that when I wake up, I’ll feel better.’ It’s tough to hear a 12-year-old say that. I thought I had problems when I was 12, but it turns out I really didn’t have any.”

While there’s no way to know what the future holds for anyone, Kirk said she’s proud she did what she could to try and make a positive difference in her cousin’s life.