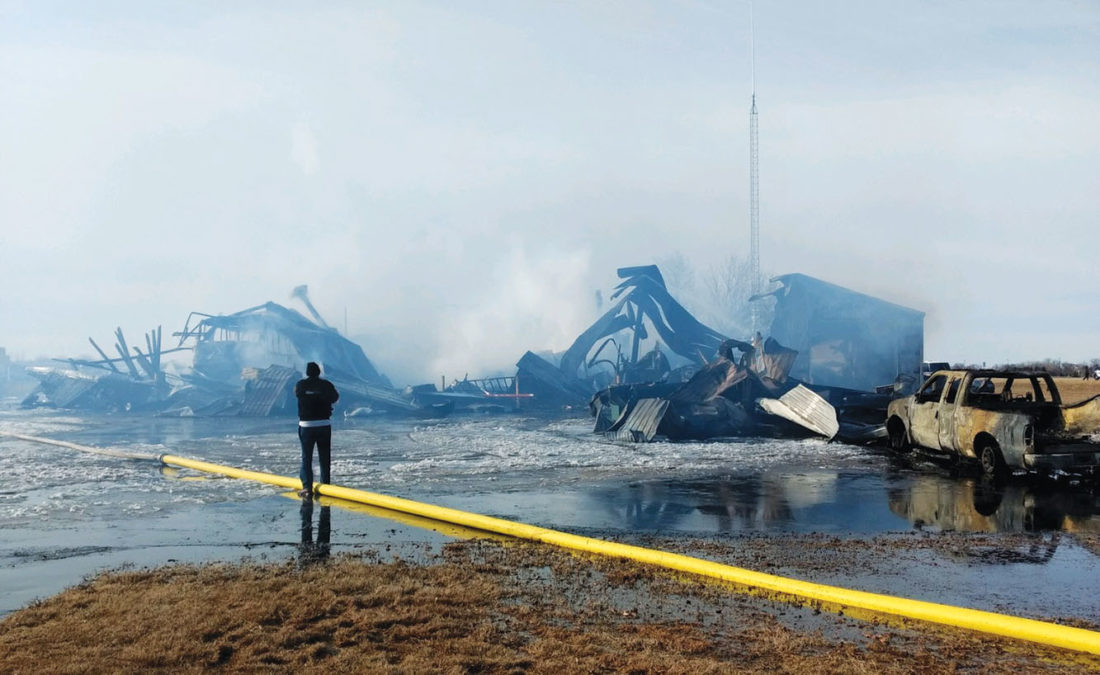 Submitted photo A fire leveled the Southwest Coaches/Southwest Tour and Travel building in Marshall on Nov. 27. Two buses were destroyed before firefighters were able to put out the flames.

It was a year of tragedy, change and hope for economic development in 2018.

No news development shook the region more than the announcement of a South Korean food company purchasing the majority stake in the Schwan’s Company. No company has left a bigger footprint in Marshall and the surrounding area than Schwan’s — from employment to large donations into the community.

That is why the Schwan’s agreement with CJ CheilJedang (CJCJ), of Seoul, South Korea was the biggest story of 2018.

1. After months of speculation of a looming sale, the Schwan’s Company announced on Nov. 14 it had reached an agreement to sell a majority stake of the company to CJ CheilJedang (CJCJ), of Seoul, South Korea. The sale will include 80 percent of Schwan’s and subsidiaries that focus on foods sold in retail stores, grocery stores and food-service venues. The sale also included the company’s manufacturing and logistics operations. However, the Schwan family keeps 20 percent ownership of the businesses being sold, as well as 100 percent ownership of Schwan’s Home Service, Inc.

After the sale is complete, Schwan’s will operate as a subsidiary of CJ Foods America Corp. But it will still be headquartered in Marshall and Bloomington, and the current senior management team at Schwan’s will remain in place, the company announced.

Paul Schwan, a Schwan’s board member and son of company founder Marvin Schwan, said one of the key things considered in the sale was finding a partner who would honor the Schwan’s legacy.

“We’re not expecting any change,” he said.

“We’re pretty excited right now,” Schwan’s CEO Dimitrios Smyrnios said of the sale. He described the move as a win for Schwan’s, current employees, the Schwan family, and CJCJ.

2. Tragedy struck the area during the July 4th holiday as a weather event dumped 6-10 inches of rain on southwest Minnesota causing roads to cave in and lakes and rivers to overflow. It took months for the region to recover.

While it didn’t cause any deaths, there was plenty of damage throughout the region. The Lyon County Board and Minnesota Gov. Mark Dayton declared states of emergencies.

Tracy residents were among the hardest hit by the rains. The flooding water filled up streets, parking lots and basements. Homeowners and businesses were left with expensive repairs.

The main photo on the Marshall Independent front page on July 5 showed rushing floodwaters flowing in between a torn up County Road 5 outside Lynd.

3. What started as a local call became a job for all fire departments across Lyon County on a November morning, when a large blaze destroyed part of Southwest Tour and Travel.

Marshall Fire Chief Quentin Brunsvold said everyone was able to evacuate the building without injury, but two buses were destroyed and the building’s roof collapsed.

“In my career, it’s probably one of the largest structure fires,” Brunsvold said.

Former fire chief Marc Klaith said the fire was one of the biggest reported in Marshall since the fire at the campus of Southwest Minnesota State University in 2002.

Fire departments from around the county assisted at the fire scene and provided tanker trucks to help supply water. The fire also drew a large civilian response, with Marshall residents and businesses donating food and water for firefighters at the scene.

Jim Hey, co-owner of Southwest Coaches, Inc., and Southwest Tour and Travel, said the fire left extensive damage. Almost all of the building was gone, except for a dozen bus stalls.

4. A letter posted on tenant doors in mid-September said the Sunrise Court apartments were under new ownership — and that all tenants had a month to find somewhere else to live.

After the initial shock, residents even contacted Marshall Mayor Bob Byrnes. The mayor said the first he was aware of the new ownership and the request to vacate Sunrise court came when tenants started calling him the morning of Sept. 21.

A challenge was filed in October with the Lyon County District Court against Suite Liv’n, the new owners. Despite efforts by Mid-Minnesota Legal Aid, a Lyon County District Court judge issued a ruling Oct. 19 on petitions from residents at the Sunrise Court apartment complex. But while the judge ordered the new managers of the property to repair its boiler systems, the ruling didn’t say anything about upholding the tenants’ leases.

5. The sound of breaking glass could be heard and black smoke could be seen rolling out of the windows as area firefighters responded to a call after getting a report of smoke coming from a downtown business in Marshall on Oct. 15.

Marshall Fire Chief Quentin Brunsvold said the proximity of the fire — right along Main Street — was a bit of a challenge, not only traffic-wise, but also because there were a lot of employees nearby.

The building housed several businesses such as Perfect Styles and Marshall Academy of Dance.

6. The parent company of Mid Continent Cabinetry in Cottonwood announced in early May it would close the Cottonwood plant later in the fall. The shutdown affected 200 employees, according to a statement by Norcraft Companies.

tru Shrimp Board Chairman Brian Knochenmus addressed a crowd of more than 200 people outside the towering building that houses the tidal basins and other parts of the research and training center. He said the technology that will be used in the center will eventually be utilized at a much larger production bay reef that will eventually be built in Luverne. That facility will include a 42,000 square-foot hatchery.

“It’s been my privilege and honor to serve at SMSU for all these year,” Gores said. “It’s been a position that’s been among the most fulfilling of my career. The Mustang family is very, very special, so it’s going to be difficult to leave. But my plan is to move closer to my grandchildren on the East Coast. I want to be there for their birthday parties, soccer games, concerts and other activities.”

9. The city of Marshall’s public safety department marked the start of a new chapter of leadership on Tuesday as Jim Marshall was sworn in as the city’s new director of public safety on Dec. 4.

A swearing-in ceremony was held for Marshall at the Marshall-Lyon County Library. Marshall, a 26-year veteran of the Marshall Police Department, accepted the public safety director position in September, after previous director Rob Yant announced his plans to retire.

10. The change in leadership at the Lyon County Sheriff’s Department was made official on Dec. 28. Sheriff Eric Wallen took his oath of office during a ceremony at the Lyon County Government Center, in front of an audience including area residents, county officials and members of law enforcement.

Wallen, a 20-year member of the Lyon County Sheriff’s Department who rose to the rank of sergeant, was elected sheriff in November. It ended up being an unusual campaign, as Wallen’s opponent on the ballot, Jim Marshall, dropped out of the race to accept a position as Marshall public safety director.

Wallen’s predecessor as sheriff, Mark Mather, officially retired. Wallen said between his past duties as sergeant and his work with Mather, he felt prepared to step into his new role.