The gatherings are growing

The number and variety of events held at the Red Baron Arena and Expo have grown over the past two years, community members say 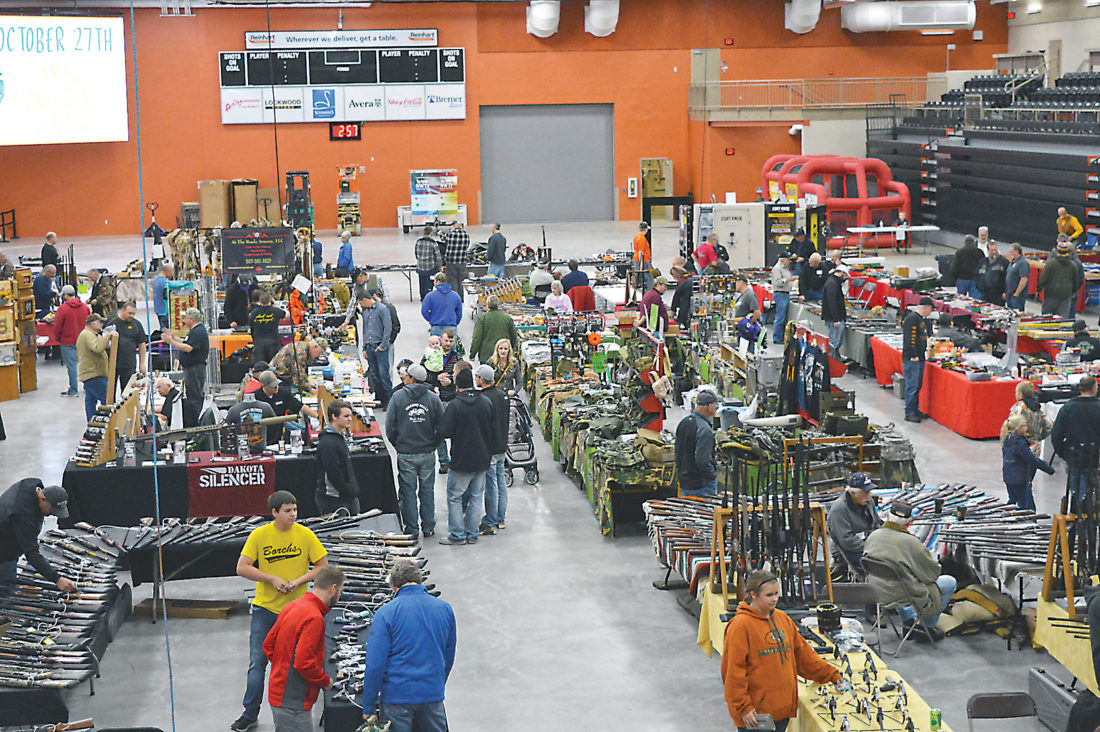 Independent file photos The Marshall Gun Show was a new event at the Red Baron Arena and Expo this year. The show drew hundreds of people on Oct. 6 and 7.

The Red Baron Arena and Expo officially opened in 2016, and since that time, the variety and size of events held there has grown. You only have to look back at the past few weekends for examples: the facility hosted a billiard and darts tournament, a fundraiser event for Hope Harbor, a gun show and a craft and vendor fair. Other major events this year have included the Marshall Home Show, and the Marshall RV, Boat and Outdoor Show.

It’s a positive situation, but Marshall Convention and Visitors Bureau Coordinator Lauren Deutz said she’s continuing to look for ways to build on the variety and success of events at the arena and expo.

“We’re finding ways to fill it when the ice goes off,” she said. One of the strengths of the arena and expo, she said, is that it allows for a variety of different uses. As CVB coordinator, she said, “We’re in the business of promoting the facility and bringing people in.”

Deutz, together with Marshall Director of Community Services Scott VanDerMillen, spoke with the Independent about the use of the arena and expo over the past couple of years.

More than 100,000 people have attended events at the arena and expo since it opened in 2016. The arena and expo was occupied for a total of 323 days in 2017, VanDerMillen said. That meant days when something, whether a meeting, a sporting event or a vendor show, was going on at the facility.

“May, July and August are kind of our slowest months for foot traffic,” he said, with fewer than 25 days of use out of the month. However, he said the schedule for weekend events has been filling in.

So far in 2018, the arena and expo has hosted 20 multi-day events, he said. Events returning for more than one year, like the craft show and Lyon County Relay For Life, are also a good sign.

Mary Tate of Marshall Community Services said the facility is also seeing rentals of its meeting and club rooms. Tate estimated on a typical week, there might be two meetings held at the facility. “We’ve had some repeat customers,” as well, she said. Some groups are even interested in bringing activities into their meetings or gatherings, and book both a meeting room and ice time.

The amount of rental fees the city of Marshall has received for use of the arena and expo has grown from last year, city staff said. In 2017, the city received a total of $120,737 in revenue from rental fees, sponsorship fees, and dasher board advertisement fees.

This year, the city has received a little more than that amount just in the months from January through September, with a total of $122,868 in revenue. That total breaks down to $84,768 in rent and fees, $18,000 in sponsorship fees, and $20,100 in dasher board advertisement fees.

The revenue totals don’t include revenue generated by Marshall’s 1.5 percent lodging and food and beverage taxes, Tate said. The city taxes help fund both the arena and expo and the Minnesota Emergency Response and Industrial Training (MERIT) Center.

The city’s fee schedule breaks down the different rates for renting the ice rinks, expo space, meeting rooms, and other parts of the facilities. The open rate for rink time is $125 per hour, with lower rates for booking 10 or more hours at once. Organizations including Marshall High School, the Southwest Figure Skating Club and MAHA also pay lower rates for ice time.

When the ice is out of the main arena, the cost for a full day’s rental of the expo floor is $1,050.

The ice arena can’t be left out of the growth equation. Use of the arena and expo’s two sheets of ice has grown over the past two years as well. Scott Mauch, president of the Marshall Area Hockey Association, said the facility has drawn the interest of teams from as far away as the Twin Cities. Marshall hosted the state A and AA bantam hockey tournament in 2017 which drew a lot of attention. Currently, MAHA also hosts three-day hockey tournaments for both boys and girls hockey.

Mauch said this season, a total of four tournaments are scheduled between November and February, as well as the Mites and Mini Mites Jamboree in March.

In a presentation to the Marshall City Council in September, Mauch said the number of youth participating in hockey programs has continued to grow over the past two years. In the 2015-16 hockey season — the last one in the former ice arena at the Lyon County Fairgrounds — there were a total of 135 players at all levels of hockey. By the 2017-18 season, that number had grown to 158 players, Mauch said. After registration for the 2018-19 season, MAHA had 165 players, but after youth programs like Learn To Skate and the Little Minnesota Wild learn-to-play program, they expected a total of more than 185 players, he said.

“That would be a 14 to 17 percent growth,” Mauch told city council members. “We believe it is realistic to achieve 5-10 percent growth over the next couple years.”

By now, Mauch said, MAHA has two teams at all levels of boys’ hockey. Mini Mite and Mite hockey numbers are growing, which leads to increased numbers of hockey players at other levels.

Mauch said the number of ice hours MAHA has booked at the arena has also grown. In the 2016-17 season, the organization had around 593 ice hours. In 2017-18, that grew to 715 ice hours. Mauch said about 815 ice hours were expected for the 2018-19 season, and MAHA has also been buying more summer ice time for players to use.

Under a memorandum of understanding with the city, MAHA pays $65 an hour for ice time, up to 450 hours. Additional ice time after that is charged at $40 an hour.

“We reinvest that back into the arena,” Mauch said — for example, through buying ice time. In his presentation, Mauch said MAHA also supports youth hockey through efforts like purchasing equipment for new hockey players, and in other efforts like working with the city to look for outdoor rink options.

“The families in our hockey association are excellent,” Mauch said. The volunteer work MAHA supporters put in helps improve people’s experiences playing hockey and using the arena and expo. “In the end, that’s what it’s about, having a good experience for the kids.”