It’s been part of Bandwagon Days for 15 years. Next week, the city of Russell will hold its last Stampede Rodeo. 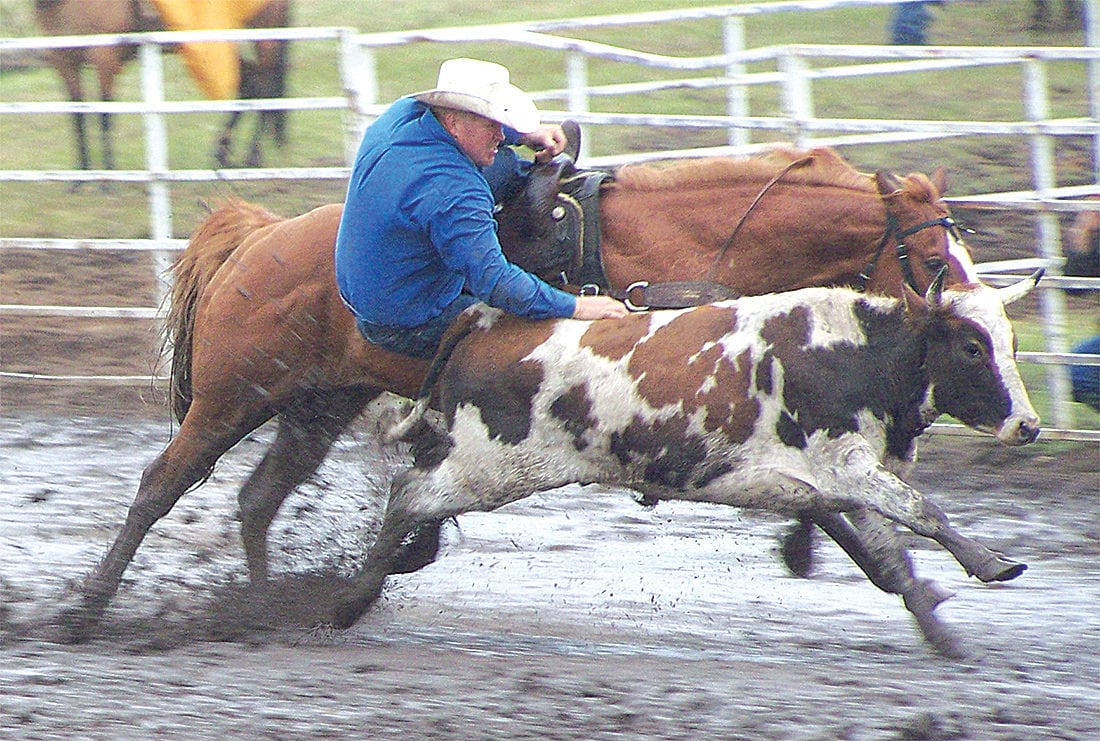 The Russell Stampede Rodeo has gone on, rain or shine — so sometimes wrestling a steer means getting muddy.

It’s been part of Russell’s Bandwagon Days celebrations for more than a decade. But next week will be the last chance to see the cowboys in action at the Russell Stampede Rodeo.

Local organizers said this year’s rodeo, on June 1 and 2, will be the last one. But they’re hoping for a good last ride.

“We decided 15 years is a good run,” said Audie Sanderson, one of the Russell community members who work to organize and promote the rodeo. Still, she said, it’s going to be hard to see the rodeo end.

“Our main focus was to provide a family event that was affordable,” Sanderson said. Rodeo organizers have stuck to that goal, she said, but the rodeo is still an expensive event to put on. That factored into the decision to make this year’s rodeo the last at Bandwagon Days.

The rodeo is one example of how Bandwagon Days has changed along with the Russell community over the years. Up until the 1990s, Russell’s town festival was called Dairy Days.

“As the number of dairy farmers decreased, they had less and less to do with it,” Sanderson said, until the festival name was changed in honor of the city bandwagon.

The Russell Stampede Rodeo was added to the mix as another attraction.

“We started 15 years ago,” Sanderson said. A group of Russell community members, including Tony Goebel, who did rodeo himself, got the event started.

“They brought it in thinking it would bring more people into town, and it really did,” Sanderson said. People would then stay for other events — you’d see a lot of cowboy hats at the Bandwagon Days dance, Sanderson said.

“A lot of times you see people coming to the rodeo both nights,” she said.

It takes a lot of work to organize, promote and put on the rodeo, but the whole community comes together for it, Korman said. Korman said her family usually brings out a camper to help out with the rodeo.

“We stay all weekend, and the kids really enjoy it,” Korman said. “You get pretty excited when you start seeing the cars pull in.”

Over time, she said, you got to know some of the regular rodeo competitors. She also liked to see the local competitors who would take part.

The weather didn’t always cooperate — “There were years we got drenched, and we just froze,” Korman said. But the rodeo was still a positive experience.

“It’s going to be very hard” to see the rodeo go, Sanderson said. “When they set up that arena, it’s just so cool seeing that all go up.”

The last Russell Stampede Rodeo will start at 7 p.m. on June 1, and 6:30 p.m. on June 2. The rodeo will feature events like bull riding, barrel racing, and head and heel roping — plus mutton busting for kids, Sanderson said. There will be some special things about the rodeo. Organizers are selling commemorative T-shirts for the event, and the first 50 kids at Friday’s rodeo will receive free cowboy hats.

“We thought it would be kind of cool to get people into town earlier,” Buchert said, so there are kids’ activities and a vendor fair planned for Saturday morning.

“She had a lot to do with Dairy Days back in the day,” Buchert said.

For the Bandwagon Days parade, Buchert said, “We’re asking any kids, if they want, to decorate their bikes or a wagon or stroller, and walk with their parents.”

Another new event this year will be a ribbon-cutting ceremony for ATV trails that are planned to open just outside Russell, near the softball park.

On Sunday, there will be a kids’ fishing tournament at the Russell Lake Park, with free fishing poles for the first 50 kids who attend.

Returning favorites at Bandwagon Days include the rolle bolle tournament, and the Russell Fire Department’s hog roast on Saturday.

Organizers said the festival helps bring people together, even as the Russell community continues to change over time.

“It also helps you to meet people who are new in town,” Sanderson said.

“I think it’s really important to keep everything going,” Buchert said of the support for Bandwagon Days.