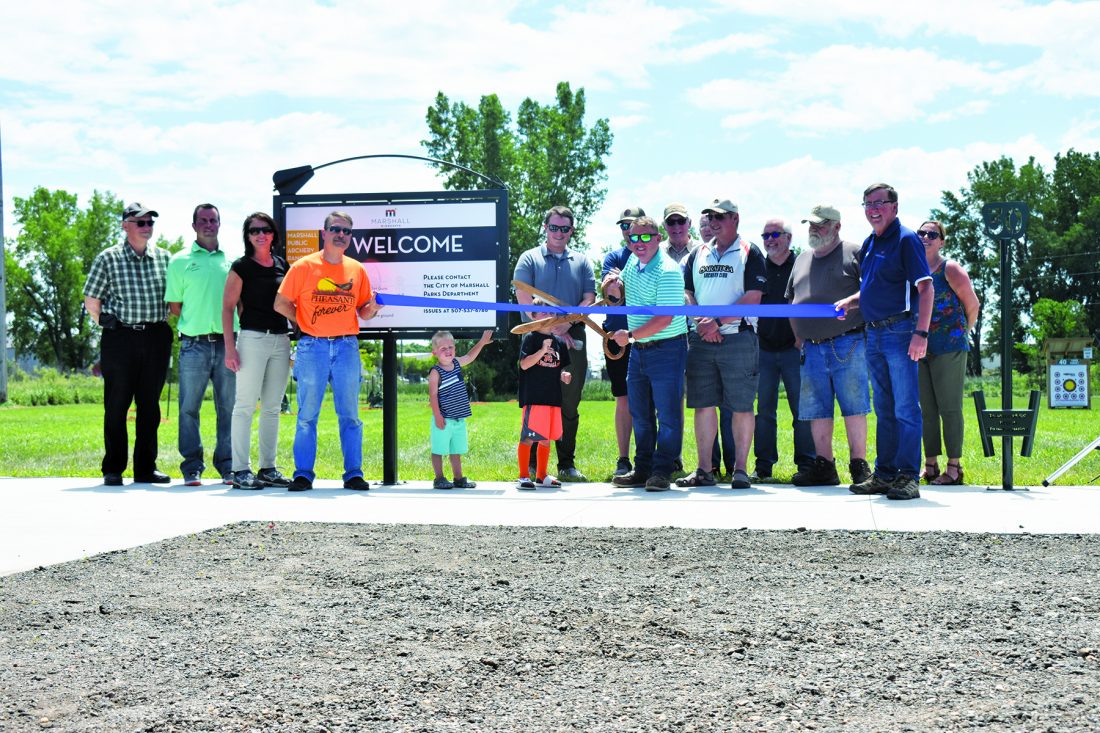 Photo by Sam Thiel Ty Brouwer cuts the ribbon to open the Marshall Archery Park on Friday afternoon. Brouwer came up with the vision for the park and helped build it.

MARSHALL — Roughly about two years ago, Ty Brouwer wanted to have a place that he could introduce his sons to the sport of archery. An avid archer himself, Brouwer came up with an idea to build a local archery park for the community of Marshall and the surrounding area. After a long process and a lot of support, Brouwer’s vision became a reality on Friday with the grand opening of the Marshall Archery Park that’s located just past the MERIT Center.

Brouwer said he was relieved to see his idea come to fruition.

“Relief,” Brouwer said. “It’s been two years in the making and it’s been a process that I didn’t realize it was going to take that long; I thought we would just level the dirt here, but it was beyond that. There was engineering involved, we got the Parks Department involved so it’s good to see it finally come to fruition.”

The city held a ribbon-cutting ceremony, with several sponsors in attendance. Marshall Mayor Bob Byrnes led off the ceremony with a few words, saying this is another place for the community to enjoy the outdoors.

“This is one more amentity for the community to enjoy outdoor recreation,” Byrnes said. “Ty is really the one who had the vision of having this outdoor recreation amenity here, he scouted out the location, worked with our Parks staff, worked with the sponsors and helped design this. He really spent a lot of time; it was well over two years in the planning process but it all did fit together really well.”

Brouwer said after he came up with the idea to build the park, he reached out to Craig Schafer, who helped him work with the MERIT Center on the location. Brouwer also worked with City Administrator Sharon Hanson, Byrnes as well as Preston Stensrud from the Parks Department to help put the plan together.

“This archery range is a city park now and if it wasn’t for the Parks Department and Preston’s team, this honestly would not have happened,” Brouwer said. “They’ve been fantastic to work with, seeing out my ideas but utilizing theirs as well. Preston and his team have let me be as hands-on as possible to make this idea become a reality.”

Stensrud applauded Brouwer for continuing to stick with his idea and is proud of what they were able to accomplish together.

“I just want to thank Ty for having his vision and staying with it. I know it took a little bit longer than we would have liked with last year being so wet but from vision to reality here we are,” Stensrud said. “I know it’s going to be great for the community and the surrounding areas to enjoy and my staff and I were very glad to be proud of something different and out of our normal. We’re going to do our best to make this first-class like all of our other facilities.”

As for funding of the park, Brouwer said they received an overwhelming response from the community and he’s grateful for their support.

“When we had to work on funding for this project, we started a sponsorship and when you drive in, you see the big sponsor board,” Brouwer said. “The response from the community was fantastic; I had so many people reach out to help with funding the project, building the project and even giving me ideas of what we should add or subtract so to everybody who has reached out to me and also the sponsors, I want to thank you for your contributions.”

Brouwer said he wanted the park to have targets spanning from 10 yards to at least 100 yards and designed the range in an L-shape to help youth and beginners learn on one side and more advanced archers to practice on the other.

“I knew I wanted to be able to shoot at least 100 yards because when I go out West hunting, I need to take further shots and there’s nothing really local with a nice, flat area,” Brouwer said. “So I designed it in an L-shape so that the people who are either being introduced like my son or anybody just sighting in a bow, they can concentrate a specific direction where people the other direction can shoot and it’s going to take the younger archers or beginners longer to shoot, so they can go get their arrows and go back and forth.”

Brouwer added he’s looking forward to not only helping teach his sons archery but also give the community and its programs the area it needs in order to help grow the sport.

“Community Services has an Intro to Archery program, which is going to be very beneficial now because they’ve actually got a facility designed for that program. Also to get my kids out here; I live two minutes away so it’s a nice quick drive, come here and shoot and then leave. They’ve got a short attention span, so I can keep them concentrated on it but then it’s for the people in the community that never had a place to shoot archery because if you didn’t do Intro to Archery, you can’t shoot anywhere,” Brouwer said. “Now we have a facility that’s free and open to the public and they can come here whenever they want and try it or just shoot at the targets themselves and that will help expose the sport in the area.”