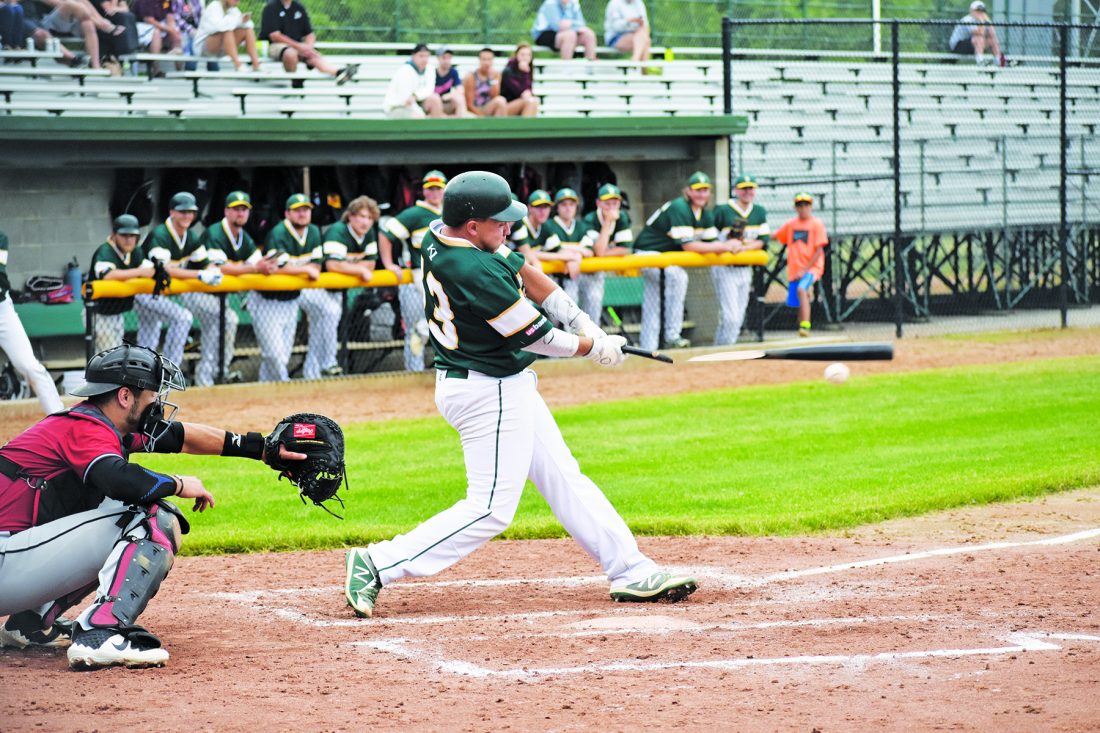 Photo by Sam Thiel Marshall’s Jordan Mernaugh breaks his bat following through on a swing during their game against Raymond on Sunday. The A’s were outhit 12-4 by the Rockets in a 13-1 loss in seven innings.

MARSHALL — The Marshall amateur baseball team was able to dodge the rain on Sunday, but wasn’t able to avoid the offensive firepower of the Raymond Rockets, as the Rockets outhit the A’s 12-4 en route to a 13-1 victory in seven innings at Legion Field.

Marshall manager Ryan Schwagel said they’re still trying to get their feet wet into the season and shake off some rust after not playing for several months but credited Raymond for hitting the ball extremely well.

“We’re still shaking some rust off. We went a few months without any baseball and then we jumped right into three games in five days, so we’ve got some sore arms and some sore bodies but we’ll come around,” Schwagel said. “We pitched five good innings and had a couple of errors and they (Raymond) hit the ball really well. They’re a good team and went to state last year and we’re just doing what we can.”

It didn’t take long for the offense to get going for Raymond, as the Rockets reached on an error and got back-to-back singles to plate a run before a sacrifice fly made it 2-0 in the top of the first. Raymond continued the red-hot hitting in the next frame, smacking five more hits to score five runs and extend its lead to 7-0.

Meanwhile, Marshall struggled to get the ball out of reach of a Rocket fielder, but still had an opportunity to get on the board. Tanner Strommen and Nick Macchio led off the second with consecutive walks before King Blanchette was hit by a pitch to load the bases with no outs. The A’s were then able to score when Matt Hmielewski reached on an error to cut the deficit to 7-1.

The A’s didn’t record a hit until the fourth inning, when Hmielewski connected on a single. Marshall then got a one-out double from Strommen in the fifth, but once again couldn’t capitalize.

Unfortunately for the A’s, the Rockets weren’t quite done on offense, reaching on an error before a pair of singles brought in two more runs. After a single and a walk loaded the bases, Tyler Steen blasted a shot to right for a grand slam to push Raymond’s lead to 13-1. Marshall would record two more hits in their final at-bats, but couldn’t push a run across to bring it to the final outcome.

Hmielewski led the way for the A’s with two hits and an RBI while Strommen and Zach Olsen each added a hit.

Eric Hulterstum led the way for the Rockets with four hits while Mike Jeseritz, John Sawatzky and Steen each collected a hit and combined for 10 RBI.

Caleb Ditmarson earned the victory on the mound for Raymond, going four innings while allowing one run on two hits and striking out three.

Good to be home

Sunday’s game marked the first time the A’s got to play on their home field. Schwagel said it felt nice to be back home after the long wait to start the season and then playing three games in South Dakota.

“It feels great to be at home,” Schwagel said. “We played three on the road to start just so we could get some games in but it feels good to be back.”

Marshall will face Willmar on Wednesday at 7:30 p.m. Schwagel said their biggest takeaway is to continue to play solid on the defensive end, but they need to improve on their pitching and hitting.