Showing support with ‘Be the Light’ 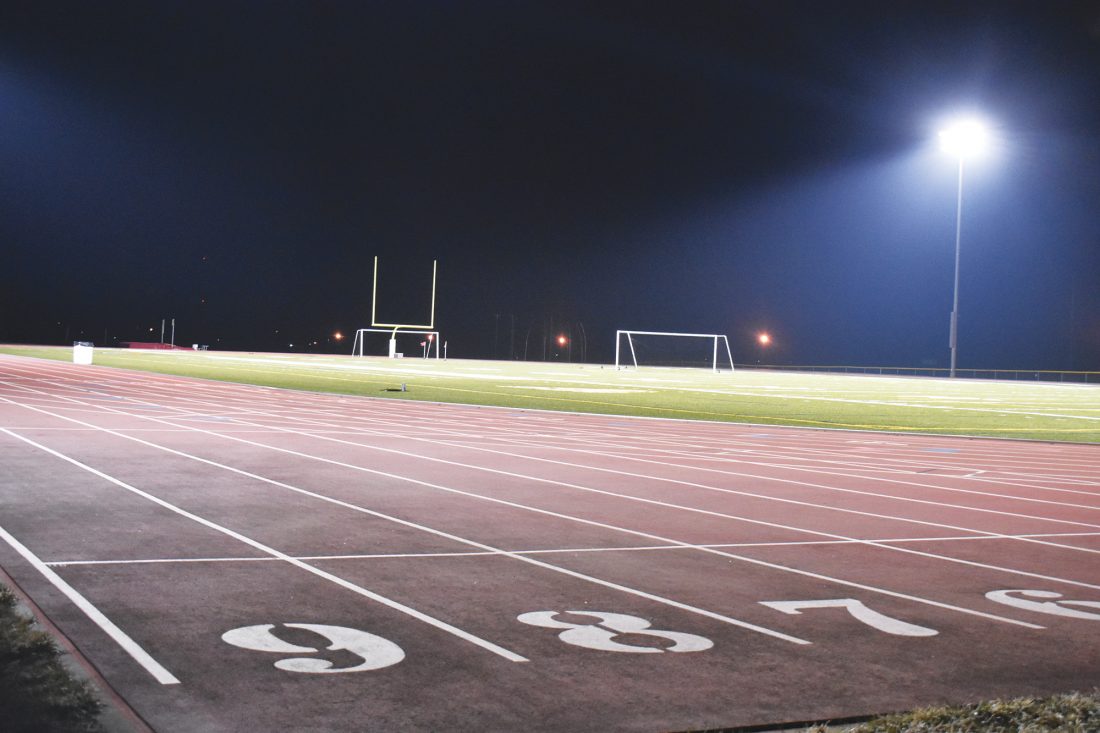 Photo by Sam Thiel The Marshall Regional Track and Field complex at Southwest Minnesota State University was recently lit up as part of the “Be The Light” movement to honor kids who are unable to attend school or participate in athletics or activities during the spring season. Marshall and SMSU are a couple of the 200-plus schools in the state who currently participating in the campaign by lighting their athletic fields every week to recognize their students.

Things were quiet and dark alongside Highway 23 last Monday night. Then, at approximately 8:30 p.m., the stadium lights at the Marshall Regional Track and Field complex slowly turned on.

As the brightness increased over the next few minutes, cars began to drive by, taking a brief moment to stop and take in the sight of the lights and tranquility of an empty stadium. More importantly, they were there to show their support, whether it was for their friends, neighbors, classmates, students, family members or anyone else impacted by the COVID-19 pandemic.

As the country reaches one month without sports, the “Be The Light” campaign couldn’t have come at a more needed time. While it certainly won’t fix the current situation or substitute feelings of heartbreak and frustration felt by students and student-athletes, especially seniors, around the nation, it is a symbol of hope that one day soon games will once again be played underneath those lights. It’s also a message of encouragement to the kids and providing comfort for them in a time of uncertainty, all with the flick of a switch.

What started out in Texas quickly worked its way to Colorado and eventually Minnesota joined the other states in solidarity. Marshall activities director Bruce Remme said they first were made aware of it on social media after Minnesota State High School League media specialist John Millea posted a tweet seeing if high schools around the state would join. The response was instant and overwhelming, as more than 220 schools have joined the movement, with more still working their way into the picture. A special video was made with pictures of different stadiums around the state being featured and had Minnesota Twins broadcaster Dick Bremer providing the narration, and has been viewed more than 41,500 times on YouTube. The Minnesota Vikings even joined in on the action, turning on the lights of their practice field at TCO Stadium on Monday.

Remme added after some conversations with other schools in their conference and SMSU, they were on board.

“It came about through John Millea making a push on social media platforms, so that’s how we first heard of it. We saw other schools across the state beginning to join in and we had some conversations with the schools in our conference about it,” Remme said. “We reached out to SMSU because we share facilities with lights with them; Jason Myhre and Chris Hmielewski checked with the president of SMSU and our administration of Mr. (Brian) Jones and Mr. (Scott) Monson were on board and it’s a way to show some recognition that we’re thinking about them.”

Some schools such as Marshall, Tracy-Milroy-Balaton and Minneota are running their lights every night while others are only having lights on once a week. Wabasso is running them on Monday nights from 8-9 p.m. while Dawson-Boyd, Russell-Tyler-Ruthton and Lakeview went with the traditional “Friday Night Lights” theme and begin each weekend with their signal of support. Lakeview also provided a livestream of the event, with a slideshow playing through it as well as the school fight song every 20 minutes, during its hour-long ceremony.

At Dawson-Boyd, the amount of minutes the lights stay on will increase with each week going through May 22, according to principal Ryan Stotesbery.

While most schools have lights at its athletic fields on campus, Marshall shares its football and soccer field and track complex with SMSU. Remme said they are running their lights for 20 minutes and 20 seconds to honor this year’s graduating class and felt that the track complex was the best space for everyone.

“Different schools are doing different things. We decided to do it every night beginning at 8:30 p.m. and to have it run for 20 minutes and 20 seconds in honor of our seniors,” Remme said. “We chose the track and field complex at SMSU because from a visibility standpoint, it was the most visible and it’s also home to our track and field and soccer teams.”

And just like every other public place during this current time, there are certain rules that need to be in effect.

Stotesbery said they’ll have plenty of space to observe the lights, but is encouraging residents to continue to practice social distancing and not gather in large groups.

“As the weather gets nicer, I’m sure people will be walking by more,” Stotesbery said.

“The lights help cover our baseball and football fields, so it’s a big area and there is a lot of space to be out there, but we want to make sure people are practicing proper social distancing.”

By 8:50, things went dark once more, only temporarily, as the lights will continue to beam for those who need it. Remme said their students are going through a lot of tough situations and making a lot of adjustments and wants them to know the community is right beside them.

“We want our students to know that even though they’re not here, we’re still thinking of them,” Remme said. “They’re being asked to go through a new way of learning, so we need to continue to be there for them in the extraordinary times we’re in.”

Stotesbery added that when things return to normal, he hopes there is a stronger, more united community.

“It’s really special to be able to do something symbolically to support people, especially moreso the students after they had their activities and athletics taken away from them,” Stotesbery said. “Hopefully when we return to normal routines, we’ll get a greater sense of community and unity, so right now we’re just thinking of them until they are able to be back.”