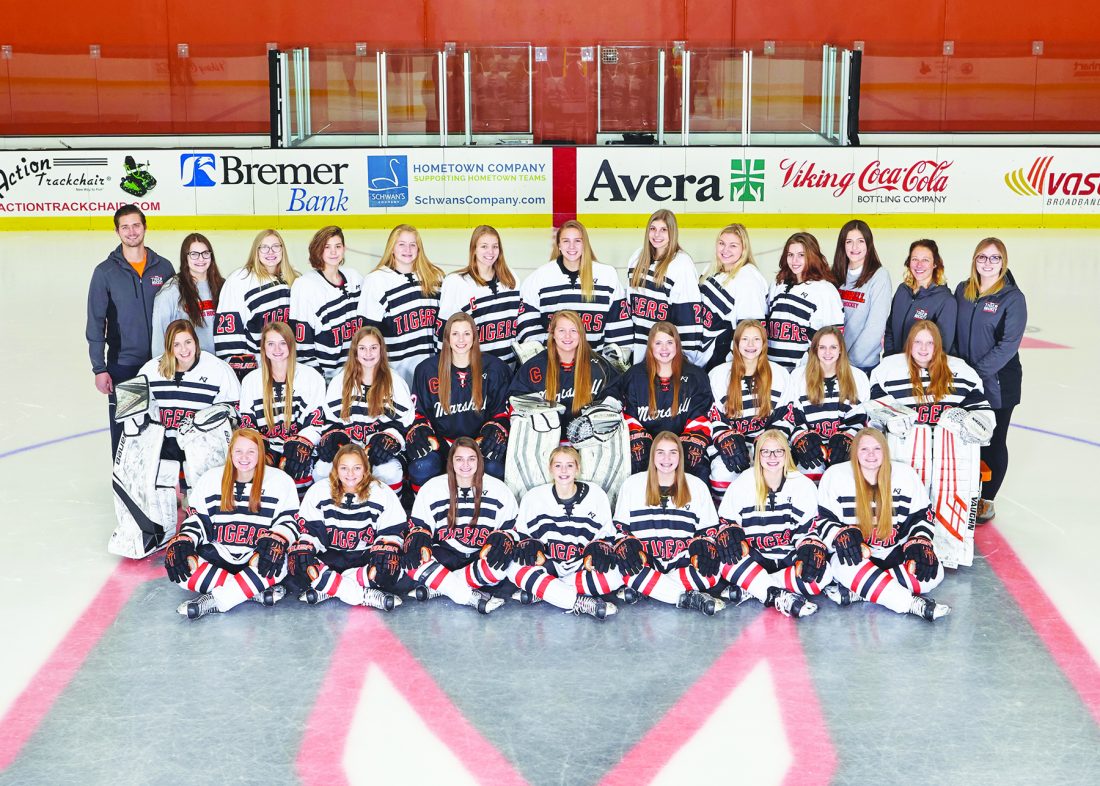 MARSHALL — With large shoes to fill after losing top goal-scorers Sydney Mauch and Olivia Peterson to graduation, the 2019-20 season was a year of growth for the Marshall girls hockey team as the Tigers continually made strides throughout their 26-game campaign.

The improvement shown up and down the lineup was something head coach Cassi Weiss drew the most pride in as she reflected on this past season.

“Overall I think this season was a huge success,” said Weiss. “As most people know, having a successful season is more than just your win-loss record. The biggest success us coaches saw was the growth of our players from 8th grade to 12th grade.”

The growth came in multiple areas which in turn led to a more cohesive team, according to Weiss.

“One way we improved throughout the season was through our communication, our individual skills, which overall improved our teamwork on the ice,” said Weiss.

Marshall was led in scoring by Kaitlyn Timm, who finished with a career-high 23 goals in 25 games for the Tigers to go along with a team-high 15 assists. Senior Logan Sherman (13-10-23) and Leah Schaefer (16-7-23) were the Tigers’ other two double-digit goal-scorers from this season.

Adding to the excitement for next season is the return of veteran netminder Emma Klenken, who had another strong season between the pipes for the Tigers as she finished with a stingy .922 save percentage to go along with a pair of shutouts. Senior Lexi Moat was also solid in net for Marshall this past season as she finished with a perfect 4-0 record and a .944 save percentage.

With an impressive mix of forwards, defensemen and a stout goaltender all set to make their return to the Marshall lineup, the expectations are understandably high for next season.

“Our expectations next season are high,” said Weiss. “Gaining nine new players and only losing three, we know our large number of veterans will be able to lead us in the right direction all season long. We are striving to have as full of a JV schedule as we can get and with that we will just see more and more growth from our players from year to year. It’s an exciting time for Marshall Girls Hockey.”