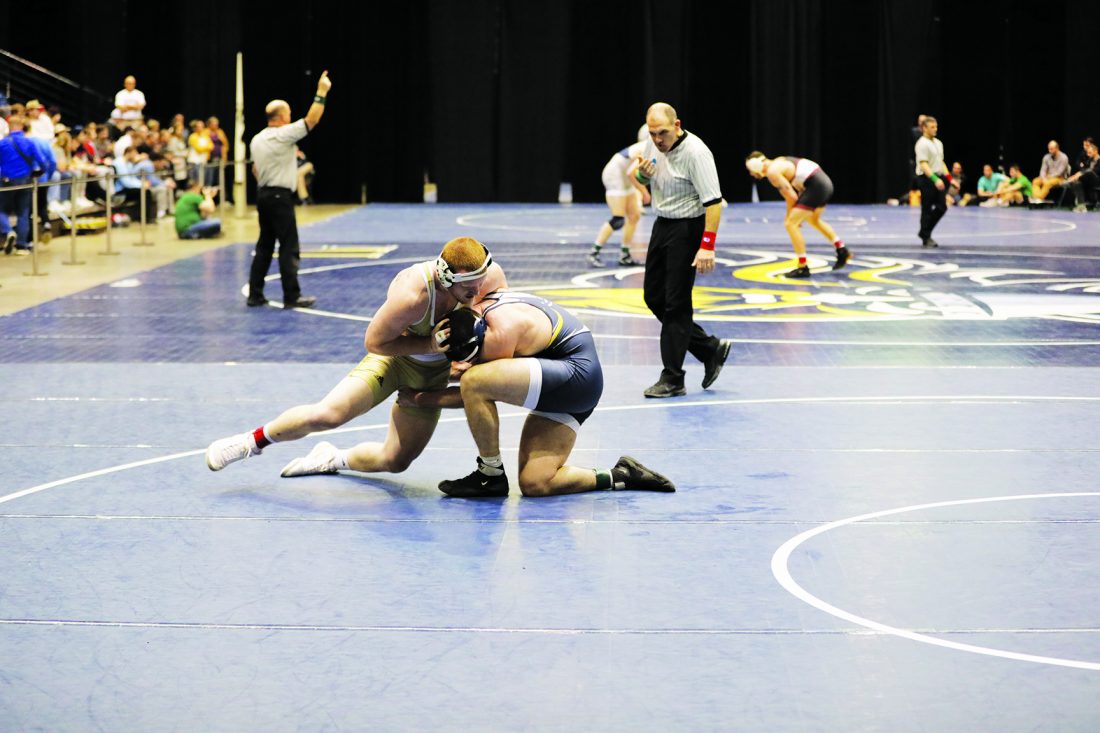 MARSHALL -When time ran out in his NCAA Super Region 5 tournament third-place match, Southwest Minnesota State University junior Jackson Ryan looked up and felt a rush of relief and excitement. Once unsure of whether or not he could return to the same level of wrestling after a devastating injury the season before, Ryan was overcome with emotion when he clinched third place and a spot in the NCAA Championships.

“It was a process that went through my head. Last year, I had a really good season going and then it kind of got derailed by injury. To have that derailed last year, it really stunk, so just looking at the clock, there were a bunch of emotions that went through my head,” Ryan said. “It was relief, excitement and I looked over at Cortez [Arredondo] who was in my corner coaching and everything came full circle and it was a matter of really good accomplishment.”

Sadly, Ryan wasn’t able to officially have that dream moment of competing in the National Championships come true when the NCAA announced the cancellation of all winter and spring NCAA championships on Thursday in an effort responding to the growing COVID-19 threat. Ryan finished his season with a record of 22-7.

Before he qualified for the NCAA Championships, Ryan had to show a lot of grit and determination throughout the Super Regional back on Feb. 29. He began his day with a 5-0 victory against Augustana University’s Daniel Bishop in the first round before he fell to the No. 1 ranked Nick Baumler from Upper Iowa University with a 12-1 loss in the semifinals.

Now facing a tough hill to climb back up from, Ryan would have to face No. 10 ranked Matt Blome from Minnesota State University, Mankato. He won by a score of 4-1 to advance to the third-place match. Ryan said after giving himself a pep talk as well as getting some advice from assistant coach Joel Skillings, he knew that had to go out and give it his all against a challenging opponent.

“Going into the Blome match, it was kind of looking in the mirror and telling yourself, ‘Do you really want your season to be done today?’ and ‘Do you really want to make your teammates watch you wrestle a meaningless fifth-place match?’,” Ryan said. “I thought about things that I talked with coach Skillings, one thing he said is, ‘There can only be one.’ I really took that into the back of my mind and it didn’t really matter who I was wrestling anymore, I had to have that mindset of going out and getting it and I really wanted it bad, so I attacked Blome pretty smart and I knew if he didn’t put me on my back I wasn’t going to lose.”

In the third-place match, Ryan squared off with Bishop for the second time in a few hours and edged him once again with a 7-5 victory to earn a third-place finish and punch his ticket to the national championships.

Ryan said if he was in a spot where he had to wrestle an opponent twice in one day, he was determined not to lose.

“I said at the start of the week that I was going to be in a situation like that where it was going to be a win and get in,” Ryan added. “I said, ‘If I get to that situation, there’s no way I’m losing.’ I’ve trained too hard and waited too long to get back to this moment.”

Working his way back

Ryan’s path to the national tournament was far from easy. It all started last season, where the then-sophomore was off to a promising start to the tune of a 12-6 record. But that strong season was suddenly derailed when Ryan was injured during a practice and tore his UCL as well as suffering a dislocated elbow.

Ryan said when he got injured, it completely changed his mindset about the little things such as going to practice that he suddenly wasn’t able to do each day.

“Last year I kind of looked at wrestling as kind of a chore and I did it because I had to do it. When I got hurt, it made me realize, ‘Wow it really stinks not being able to compete every day’ and having to do all of these little rehab and taxing things,” Ryan said. “It really changed my mindset on looking at competing and practicing and everything because you don’t think about that stuff, but it can be taken away that fast.”

After being out from January-June, Ryan was granted a medical redshirt. He said once he was given the redshirt, a huge weight was lifted off his shoulders.

“It was assuring that I got last year back for this year and it made me breathe a little easier knowing that this isn’t my last go-around and a good thing to keep in the back of my mind,” Ryan said.

‘He believed in me and took that risk for me’

From the moment he stepped foot on campus, Ryan said SMSU coach Jesse Nelson has taken him under his wing and put a lot of faith in him early on and their relationship has continued to get stronger every day.

“Since the first time I came here on my visit, I knew I was going to be coming here because Jesse has that mantra of once he’s going to take you under the wing, you’re under his wing. I saw a lot of myself in him; he reminded me of his situation that he went through was a lot like my situation in high school. I wasn’t the greatest student in high school, but I knew that if I could get a place to go to for a college and have someone take a chance on me, I was not going to let it slip and Jesse believed in me and took that risk for me,” Ryan said. “We’ve had our ups, we’ve had our downs, but Jesse’s not just a coach, he’s someone who truly cares about you and wants to see you succeed and wants the best for you. That emotion that he shows sometimes, he’ll be honest with you, but that’s what you want from him rather than him not being honest with you. My relationship with him this year has been great and I’ve just been trying to build on that stuff.”

Ryan added that his teammates have played an important role as well and he’s learned a lot from them.

“They’re awesome. We’ve got a bunch of young kids on our team now; I’m one of the older guys and next year I’ll probably be the oldest guy, so they joke with me a lot and tell me I’m going to be here forever and it feels like it sometimes because I’ve been here for a half a decade,” Ryan said. “They’re great, they make me feel young again and it makes also feel really old at the same time, but it makes me enjoy wrestling that much more.”

On the other side, Nelson said Ryan has had a significant impact on him, adding he helps keeps the mood light and fun when they need it.

“Jackson is a kid where he came in and you weren’t quite sure what you were going to get, but obviously he’s made it very easy for me to coach him. We’ve built a great relationship on and off the mat, I’ve been a good mentor for him but he’s been a good mentor for me as well,” Nelson said. “He’s always very kind and lighthearted and sometimes when you’re having that stressful day, Jackson can brighten that day up and lighten up the mood and I think that’s something he also does for his teammates as well.”

Ryan is another example of the storied success the Mustang wrestling program has had with Nelson at the helm. Nelson has had at least one of his wrestlers reach the national meet the past three seasons, with Ryan becoming the 47th SMSU athlete to qualify in its history, and said it means a lot to him and their program to see that success on a consistent level.

“It means a lot to our program and to me as a coach just to be able to represent our school at the national tournament year in and year out,” Nelson said. “I think it’s been 12 of the 13 years I’ve been here we’ve represented SMSU at the national tournament, so I feel very proud of that accomplishment and just want to continue to build and grow; we want to put more guys in this situation and I think with this young team that we have right now, I think we have an opportunity to continue to build on what we’ve done.”

When Ryan looked up and realized he had qualified for the national championships, he turned to his former roommate and good friend Arredondo, who had been in a similar situation when he had qualified for the national championships the two seasons prior. Ryan said Arredondo was a big reason why he ended up going to SMSU and has developed a special bond with him throughout the last few years.

“I gave him a big smile and there were lots of hugs and a lot of raw emotion. Cortez was my roommate last year, he’s a two-time national qualifier and a big part of the process of why I came here. He has been a big part of this program and a lot of people don’t understand the type of culture that Cortez has given us and created,” Ryan said. “He still comes back and one thing for me that he has preached in my mind is that everyone is human. We sometimes look at other teams or schools like they’re some big superhero and in reality they’re all human, no one’s different, we’re all equal. Cortez has definitely been someone that anytime I’m nervous I’ll text or talk to and to have him there in that match with me, like I said everything kind of came full circle and everything happens for a reason and I think that reason of him there is something you can’t write.”