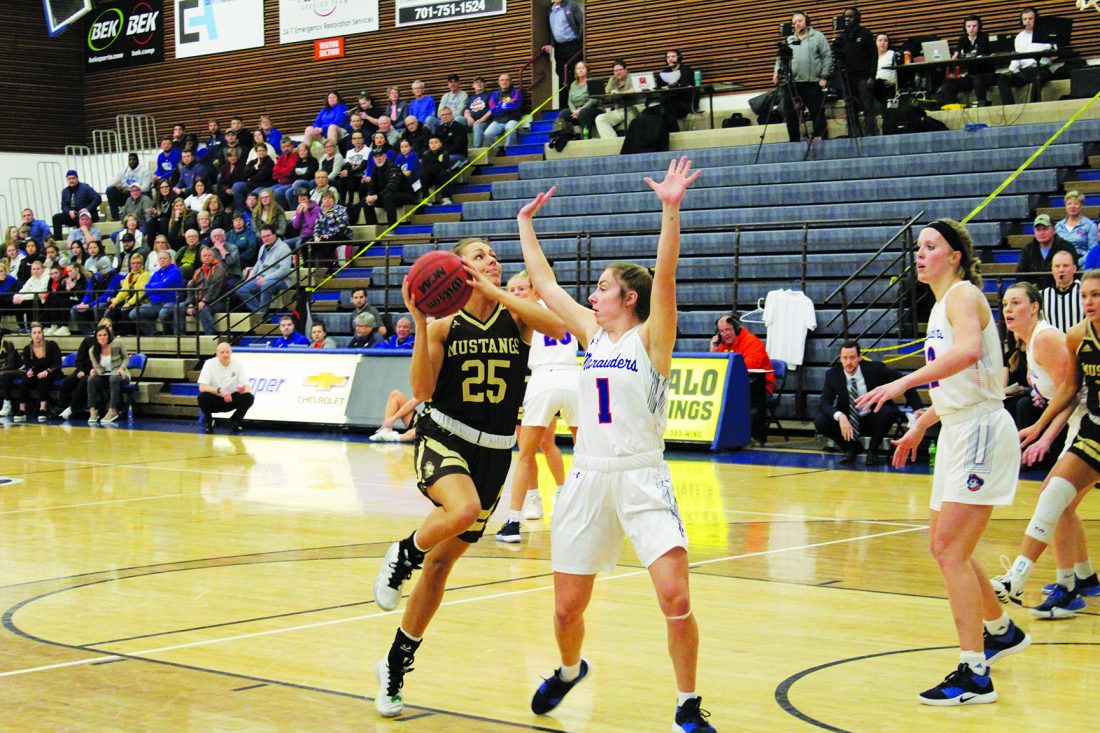 Photo courtesy of SMSU Athletic Communications SMSU’s Madison Gehloff looks to score during their NSIC Tournament game against the University of Mary on Wednesday. The Mustangs fell to the Marauders 84-74.

BISMARCK, N.D. – The Southwest Minnesota State University women’s basketball team closed its season with an 84-74 loss to the University of Mary, inside the McDowell Activity Center in Bismarck, N.D., in the first round of the NSIC/Sanford Health Tournament on Wednesday night.

UMary, the No. 3 seed from the North Division, improves to 22-10 and advances to the quarterfinals of the NSIC/Sanford Health Tournament on Sunday at the Pentagon in Sioux Falls, S.D., facing Minnesota State.

Junior guard Meleah Reinhart recorded her fourth 20-point game this season as she poured in a career-high 27 points to lead the Mustangs, shooting 12-of-18 from the field and connecting on three 3-pointers. Reinhart led four of the Mustangs in double-digits as Jenna Borchers added 12, while Madison Gehloff and Erin Baxter each added 10 respectively. Sara Teske and Abuk Akoi tied with a team-high six rebounds on the night.

The Marauders were led by the efforts of junior Lauren Rotunda, who finished with 21 points, while Cassie Askvig recorded 19 and Megan Volt added 11.

The Marauders were able to secure 22 points alone off of free-throws while Mustangs earned even points going 7-of-10 from the line.

The battle was evident as the teams opened the game neck-in-neck until a 5-0 run to end the first quarter would put the Marauders up with a four-point lead at 16-12.

Reinhart opened the second quarter with a lay-up to trail just two-points, but the Marauders would take advantage of two short runs strung together to cling to a 10-point lead heading into the half.

Fouls thwarted the Mustangs early on as the Marauders stepped the line for seven attempts, while the Mustangs waited for their first appearance throughout the whole first half.

The third quarter opened with the Mustangs taking their turn to run up the Marauders to cut the deficit to just four-points, at 49-45 with 5:20 to play in the third, after trailing by 10 points just two minutes prior.

The Marauders would respond, however, keeping the Mustangs scoreless for the final two minutes to regain a 63-51 lead.

Reinhart recorded 19 of her 27 points in the second half to attempt to catch UMary throughout the final half but the Mustangs lost their main defensive force with just over three minute to go in the fourth quarter as Akoi fouled out at 3:06. Akoi, who finished the night with six rebounds, six points, and just one block, ended the season just one block shy of tying Shelly Honermann at second in the SMSU career books.

With 1:51 to play, Borchers, who ended the night just one 3-pointer shy of tying the single-season record for 3-pointers, drove to the basket to bring the Mustangs with seven points at 77-70, but UMary’s Macy Williams to would step the line ten times in the fourth alone to 9-of-10 to help boost the Marauders to the 84-74 victory.

Borchers finished the 2019-20 season with 72 3-pointers, one 3-point field goal behind Michelle Bruns, who closed her career with 73.

The Mustangs finished the 2019-20 campaign with the first winning record since the 2009-10 season.

Wednesday’s game was the final game for SMSU senior, Emily Buysse. Buysse closed her career with 200 points, including pouring in 61 3-pointers.