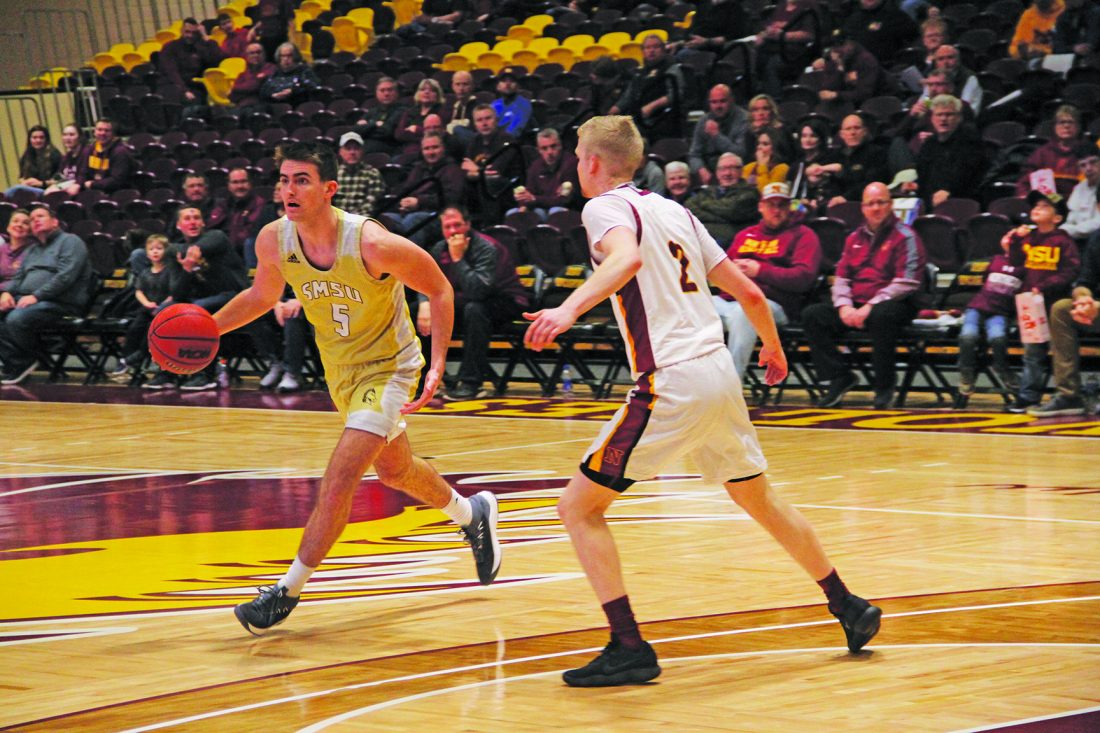 Photo courtesy of SMSU Athletic Communications SMSU’s Grant Kramer dribbles the ball during their NSIC Tournament game against Northern State University on Wednesday. The Mustangs fell to the Wolves 79-67.

ABERDEEN, S.D. – Northern State, the regular season conference champion and No. 1 seed in the North Division, shot 65 percent in the second half with five 3-pointers and used a key run midway through the second half, to pull away and defeat Southwest Minnesota State 79-67 in the first round of the NSIC/Sanford Health Tournament on Wednesday night at Wachs Arena.

NSU (23-6), ranked No. 21 nationally and fourth in this week’s NCAA regional rankings, will now play in the quarterfinals of the tournament on Saturday at 12 p.m. in Sioux Falls, S.D., at the Sanford Pentagon.

SMSU, the No. 8 seed form the South Division, and with zero seniors on the roster, ends the season with a record of 8-21.

It was the third straight season the two teams played in the NSIC Tournament with the previous two coming in the championship game in Sioux Falls with NSU winning both times.

NSU held a 57-52 advantage with nine minutes left in the game, but used a 13-2 run over the next two and a half minutes to pull away and build a 70-54 lead. Mason Stark, who led the Wolves with a game-high 27 points, scored eight points during the key stretch. Stark finished the night shooting 9 of 9 from the field with two 3-pointers and four assists.

SMSU was paced by Grant Kramer’s career-high 18 points on 7 of 10 shooting with four 3-pointers, while Jake Phipps also scored 18 points on 8 of 11 from the field. Kramer closed the season reaching double figures in the final four games of the season with 16 3-pointers.

Nick Dufault also scored in double figures for the Mustangs with 10 points on 5 of 11 shooting. Phipps grabbed a team-high seven rebounds, while Weston Baker Magrath added six rebounds. Kenny Byers, SMSU’s leading scorer, was held to eight points, but he dished out a game-high seven assists. Cliff McCray added a career-high six assists for the Mustangs.

SMSU struggled to open the game committing five turnovers in the first four and a half minutes as NSU jumped to an early 12-5 lead.

The Mustangs pulled to within 14-13 with just over 13 minutes remaining following field goals by Byers and Phipps, but the Wolves answered with back-to-back 3-pointers to start a 12-2 run and build a 26-15 advantage.

SMSU had its own run in response as Kramer and Phipps combined for nine points, capped off by a Phipps three-point play to pull the Mustangs to within 28-24 with four minutes left in the half.

Cliff McCray would drill a 3-pointer in the final minute of the half to pull SMSU within 34-31, but NSU’s Gabe King closed the half with his own 3-pointer to give the Wolves a 37-31 halftime lead.

Both teams started the second half red-shot shooting from the field with SMSU cutting the deficit to 42-38 with 17:45 left after a McCray jumper.

The teams continued to trade field goals over the next eight minutes with SMSU pulling to within 57-52 with just over nine minutes remaining in the game on a Kramer field goal.

NSU then started the key run moments later as Gabe King and Stark hit back-to-back 3-pointers, while Parker Fox added a jumper to take a 65-52 lead.

The SMSU roster had zero seniors and four juniors.