Wabasso uses fast start to take down Dawson-Boyd at home 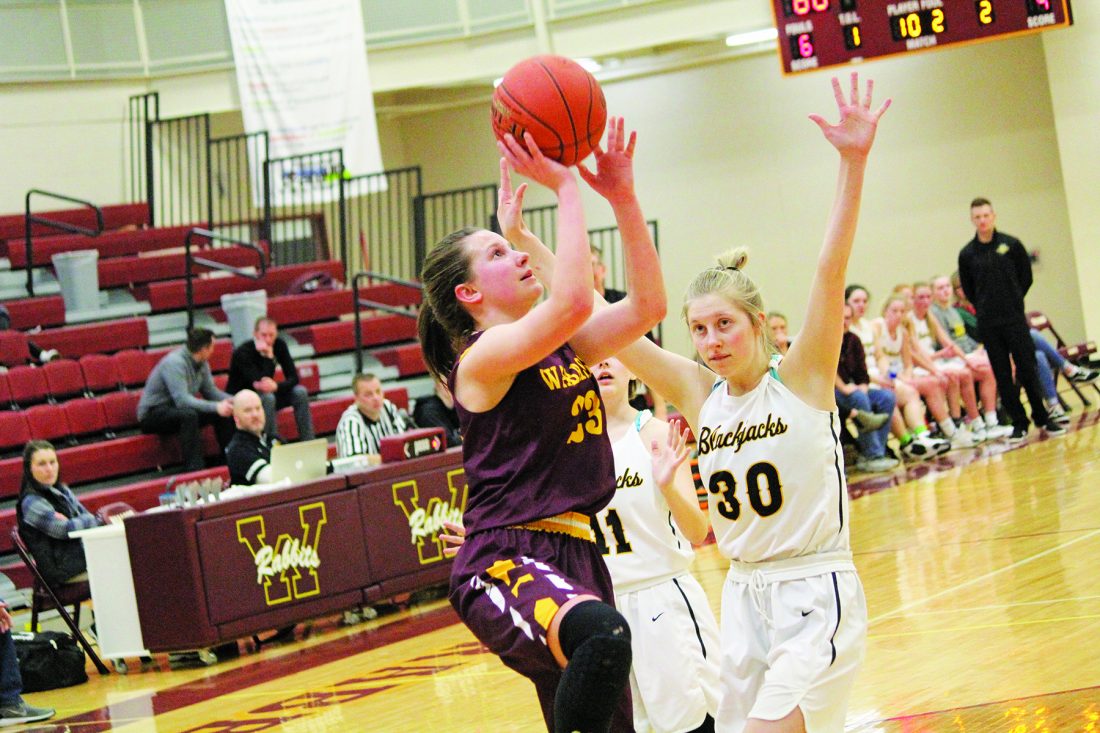 Photo by Jake Przytarski Wabasso’s Avery Carlson goes up for a layup during Monday’s non-conference matchup against Dawson-Boyd. The Rabbits defeated the Blackjacks 81-34.

WABASSO — Feeding off of a tone-setting 9-0 scoring run to open the game, the Wabasso girls basketball went on to record its second-highest scoring output of the season on Monday at home with an 81-34 blowout victory over Dawson-Boyd.

The Rabbits were led in scoring by guard Kelsey Frank and center Allison Fenger, who both poured in 18 points for Wabasso.

“(The press) was important but the biggest factor tonight I think was Fenger.” said Dolan. “She controlled the inside and they didn’t have anybody that could matchup against her. Ally Fenger should have that type of game every night where she’s dominant and strong. That was the difference tonight for us in a big way I thought.”

Though his team was unable to come out on top, DB coach Justin Wager was encouraged by the way his team continued to battle throughout the second half despite staring down a large deficit.

Leading scorer Kelsey Frank got the Rabbits off to a fast start in the opening minutes of play by scoring the team’s first seven points in the midst of their 9-0 run. With multiple turnovers generated by the press, Wabasso kept its foot on the gas with another offensive surge highlighted by fastbreak baskets that pushed their lead to 18-1 shortly after.

In need of an answer, the Blackjacks turned to the Bartuneks as Avery fed Laney inside for the team’s first field goal. As the offense began to find its rhythm, DB was able to close the gap to make it a 22-10 game following a 9-4 scoring run capped off by a three-pointer from Avery Bartunek. The offensive success for the Blackjacks was shortlived, however.

The Rabbits climbed back into the driver’s seat for the remainder of the half by outscoring DB 28-14 to make it 50-24 at the break. Fenger led the way for Wabasso with 16 of her 18 points scored in the first half while Avery Bartunek paced all Blackjack scorers with seven points.

When play continued for the second half, the Rabbits provided no room for a Blackjack comeback by extending their lead to 30 following a 7-2 run. By the end of the game, Wabasso’s lead climbed all the way to 47 in an 81-34 win.

Looking ahead, Dolan hopes the team can continue to make positive strides in preparation for the postseason.

“We have GFW tomorrow night so it’ll be difficult coming off back to backs,” said Dolan. “It’s not easy for us, we play a lot of young girls and sometimes they struggle a little bit on the back-to-back nights. I think we just need to keep building for the playoffs and I think that’s what we’re doing.”

Coach Wager is looking to see his team improve on valuing its possessions and taking better care of the basketball.

“I think the biggest thing is to take care of the ball and value the possessions that we get–get a good shot shot every time down, and defensively be alert and aware,” said Wager. “Recognize when the passes are coming and be ready for them by moving when the ball is in the air instead of waiting until they’ve already received the ball.”