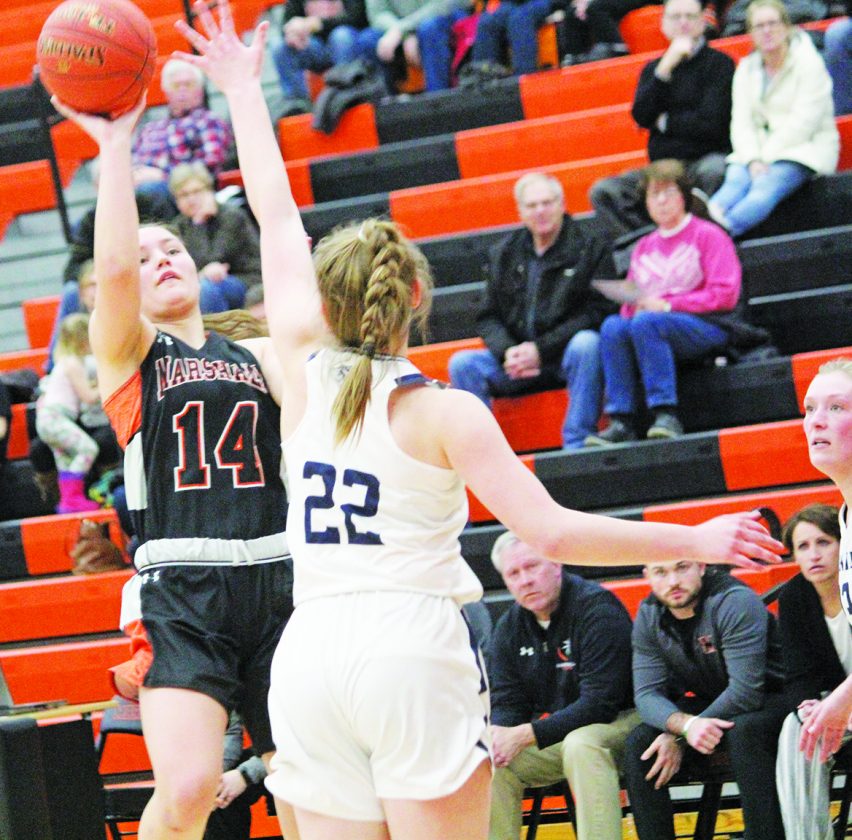 Photo by Jake Przytarski Marshall’s Jordyn Hilgemann shoots a jumper during their game against Jackson County Central on Tuesday. The Tigers defeated the Huskies 85-44.

MARSHALL – Over the course of its historic run through the regular season, the Marshall girls basketball team has depended on the leadership shown by its four seniors in Lenei Estrada, Paige Andries, Adrienne Simpson and Natalee Sample.

The talented group was honored prior to the start of Tuesday’s Big South Conference matchup and later — alongside a spectacular 41-point night from junior Jordyn Hilgemann — helped the Tigers cap off a perfect 12-0 regular season on their home court with an 85-44 win over Jackson County Central.

Marshall coach Dan Westby lauded the group for their hard work and said it’s been a fun ride having them as players.

“They’ve done so much as a group,” said Westby. “They’ve put in a lot of time, and the time they’ve put in has been quality time. They come to the gym all summer long and get after it and fight for each other and it’s just been a great group. Just for their sake, I just hope we can extend this season as long as possible for them. They’ve been a great group. It’s been a fun ride with them.”

The group of four seniors took the court alongside Hilgemann as Marshall’s starting five against the upset-minded Huskies and immediately established an offensive rhythm with four unanswered points off baskets by Hilgemann and Andries. The Huskies–led by Alainna Wolf–were quick to respond, though, and took a 7-6 lead following a 7-2 run. The one-point lead was their last of the game.

Westby said his team lost track of some of JCC’s scorers during stretches of the first half but made defensive adjustments along the way that proved effective in the second half.

Using quick ball-movement and a brilliant scoring effort by Hilgemann that netted her 25 points in the first half alone, the Tigers carved up JCC’s zone defense and regained the lead at 8-7 before going on to make it 23-11 following three-straight made baskets in rapid succession. Marshall remained dominant down the stretch and outscored JCC 27-17 to take a commanding 50-28 lead into halftime.

The 50-point half and overall offensive success in the face of JCC’s zone defense was encouraging for Westby given how infrequently the team has encountered it throughout the season.

“We haven’t seen a lot of zone this year and we moved the ball well against their zone,” said Westby. “(We) were able to find some kids on the perimeter and inside that were open and they were able to knock some shots down.”

The Huskies proved resilient in the beginning of the second half as they went basket-for-basket with the Tigers in the opening minutes to make it a 20-point game before Marshall’s explosive offense put the visitors away for good. Using a lightning-quick 13-0 run, the Tigers turned a back and forth start into a one-sided blowout in a matter of minutes that made it 73-38 following a three-pointer by Sample.

Westby said the quick-strike offense that put them over the top in the second half came as a result of creating turnovers on the press and finding open players on the break.

“It felt like we had about a 10-point spurt there where JCC didn’t even get a shot and part of that was due to our pressure,” said Westby. “We found some kids on the break when we were able to turn them over. Our team has the ability to do that, and I think we did that in that stretch there in the second half where we just pulled away and did a lot of nice things during that stretch.”

In the waning minutes of the half, the Tigers subbed in their reserve players for a short stretch before bringing out their four seniors to close out the game that ended in an 85-44 final.

Marshall (23-0) will be back in action on Friday when the team travels to Pipestone to take on the Arrows at 7:15 p.m.

Though the team likely won’t be able to get one in today, Westby is focused on seeing the team work hard in upcoming practices in preparation for their slate of big games.

“We go to Pipestone on Friday and that’s always a tough place to play,” said Westby. “Then we’ve got a couple more big games coming up the following weeks. It doesn’t sound like we’re going to be able to practice tomorrow, but beyond that we still need to come to practice everyday and get after it.”