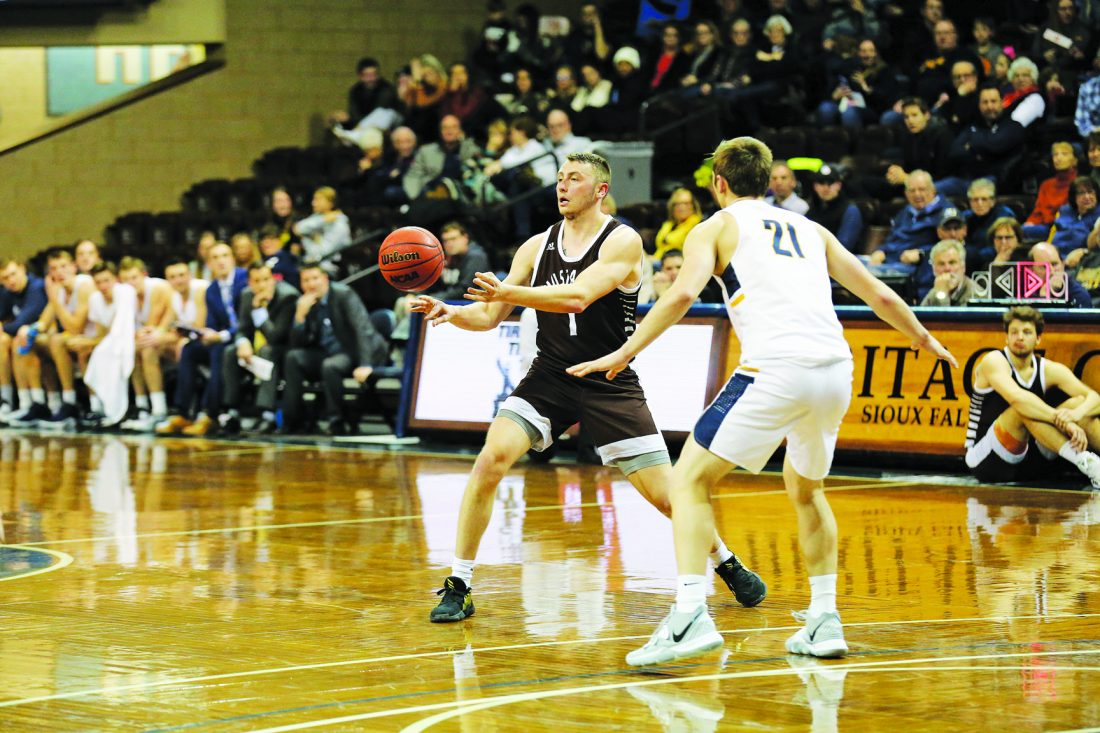 Photo courtesy of Josh Jurgens/Augustana Sports Information SMSU’s Braedan Hanson passes the ball during their game against Augustana University on Friday. The Mustangs fell to the Vikings 64-61.

SIOUX FALLS, S.D. – The Southwest Minnesota State men’s basketball battled one of the top teams in the Northern Sun Intercollegiate Conference on Friday night, but Augustana made enough clutch free throws in the final minute of the game to hold on for a 64-61 victory at the Sanford Pentagon.

Due to injuries, SMSU was short-handed in the game as Nick Dufualt, Grant Kramer and Kaden Evans all missed the game. Despite a seven-man rotation, the Mustangs limited the Vikings to 28 percent shooting and 21 points below their season scoring average.

Augustana improves to 11-2 overall, 6-1 NSIC, as AU’s Matt Todd scored a game-high 25 points, including making six free throws in the final 16 seconds of the game.

SMSU trailed 56-55 with less than 40 seconds left in the game and had possession, but Byers missed a short jumper and the Mustangs were called for a foul on the rebound with 21 seconds left. The Vikings were a perfect 8 of 8 from the free throw line in the final 21 seconds of the game to seal the victory.

SMSU maintained a lead for much of the first 10 minutes of the game highlighted by a pair of 3-pointers from Andy Stafford.

The Mustangs held an 11-9 lead, but the Vikings rallied with a 16-5 run over six-plus minutes to take a 25-16 advantage. SMSU would cut the deficit to 25-21 behind a 3-pointer by McCray and a jumper from Dayman, but Augustana closed the half strong to build a 13-point lead, before McCray ended the half with a 3-pointer to make the score 34-24 at halftime.

SMSU used strong defense to open the second half, limiting AU to just one point in the first six minutes, as the Mustangs regained the lead. A 3-pointer by Braedan Hanson tied the game at 35 with 16 minutes, left, while moments later field goals by Dayman and Byers pushed the SMSU lead to 39-35 with 13:30 remaining in the game.

AU answered to build a 45-41 advantage with 9:50 on the clock, but a 3-pointer by Dayman and a layup by Hanson put SMSU back in the lead at 46-45 with 8:45 left. It was SMSU’s last lead of the night as the Mustangs went scoreless for more than three minutes.

The Vikings eventually extended the lead 56-50 with 3:25 remaining, but two free throws by Weston Baker-Magrath and a 3-pointer by Dayman with 1:25 on the clock cut the deficit to 56-55, setting up the final exciting minute of the game.