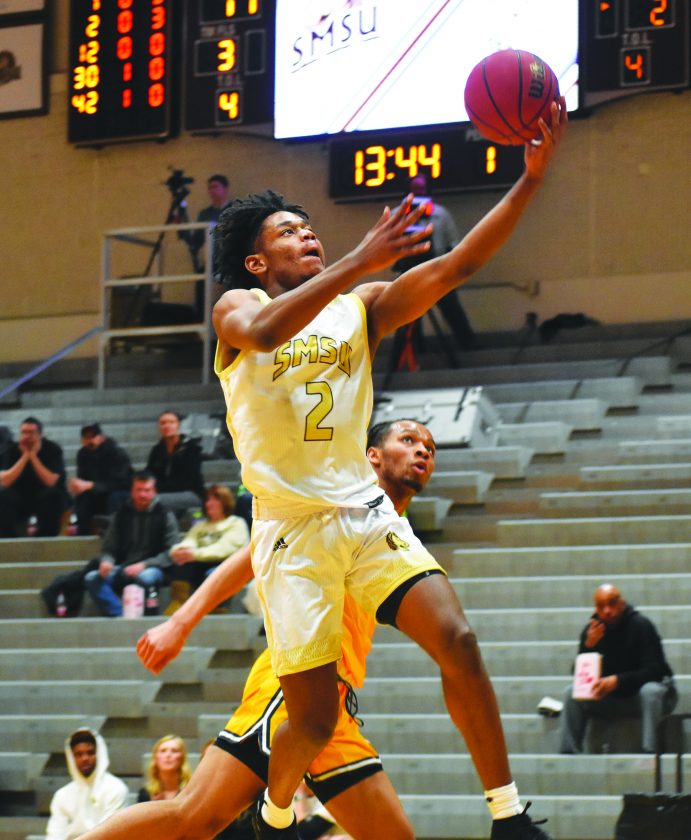 Photo by Sam Thiel SMSU’s Cliff McCray goes up for a layup during their game against Concordia-St. Paul on Friday. The Mustangs fell to the Golden Bears 79-70.

MARSHALL — Concordia-St. Paul used a key second half run to hold off a Southwest Minnesota State comeback attempt and earn a 79-70 victory on Friday night in Northern Sun Intercollegiate Conference men’s basketball inside the R/A Facility.

SMSU trailed 51-37 early in the second half and closed the deficit to 56-54 with 11 minutes left in the game, but CSP rallied with a 14-2 run to extend the margin to 70-56 with seven minutes remaining and never looked back in earning its third straight win over SMSU.

The Golden Bears shot outstanding all game long and finished the victory connected on 31 of 52 field goals (60 percent), including 8 of 15 from 3-point range. CSP held a 34-29 rebound advantage and held a 40-22 advantage in points in the paint.

CSP’s Jordan Coblin scored a game-high 22 points with seven rebounds and five assists. He made 8 of 13 field goals and drilled three 3-pointers.

SMSU’s Kenny Byers led the team with 21 points, while dishing out a career-high eight assists. He also grabbed six rebounds and recorded four steals. Andy Stafford scored a career-high 15 points in the setback, while Nick Dufault, who missed the last two games with an injury, returned to action with 15 points with three 3-pointers.

The Mustangs held a four-point lead in the first half on four different occasions, including at 24-20 following a Jake Phipps field goal with 8:23 on the clock. SMSU would later hold a 31-29 advantage with 2:57 left after a Dufault jumper, but CSP rallied with 11 straight points to build a 40-33 advantage before taking a 42-33 lead into the halftime break.

CSP shot a blistering 71 percent (17 of 24) from the field in the first half with six 3-pointers. It was the first time an SMSU opponent shot 70 percent or higher in a half since Feb. 12, 2016, versus Augustana.

SMSU shot 52 percent (13 of 25) in the opening half with four 3-pointers. Stafford led the Mustangs with nine points in the half, while Byers scored eight.

Taking in a movie

Eleven US troops flown to medical centers after Iran strike