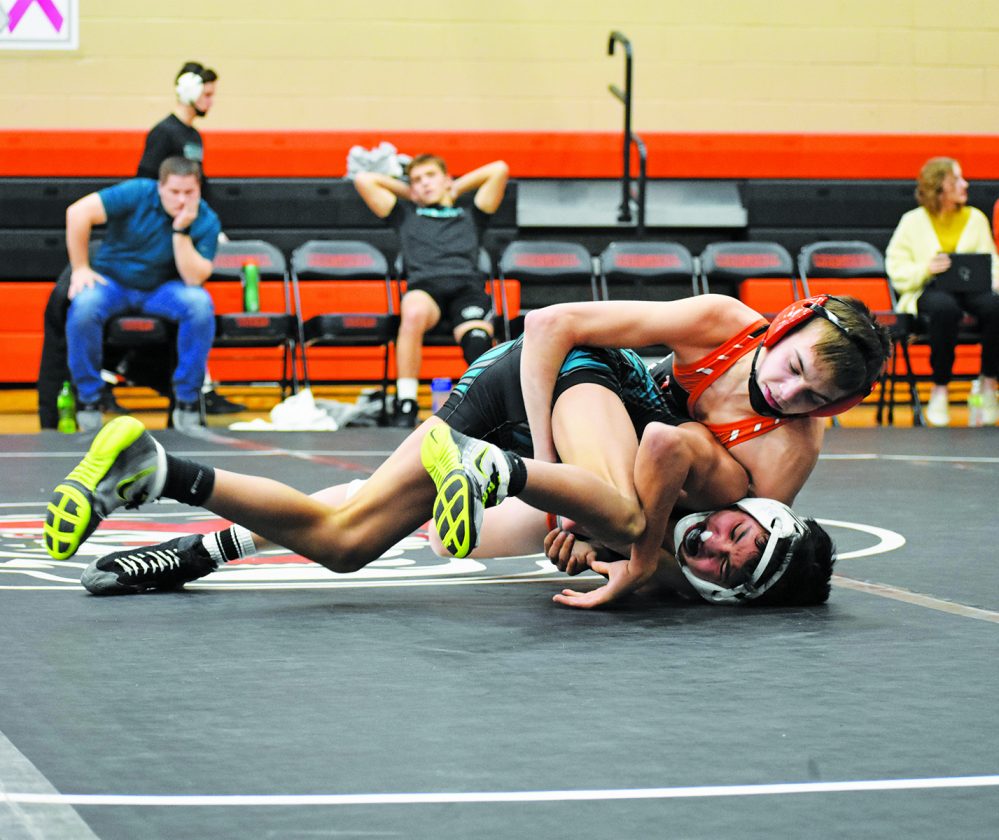 Photo by Sam Thiel Marshall’s Brett Regnier tries to pin his Windom/MLA opponent during their match on Thursday. The Tigers defeated the Cobras 38-28 and United 51-24 for a triangular sweep.

MARSHALL – After a successful outing at the Buffalo Invite over the weekend, the No. 6 Marshall wrestling team returned home for an important triangular meet against Windom/Mountain Lake Area and Dawson-Boyd/Lac qui Parle Valley/Montevideo United on Thursday night.

Relying on some key wrestlers, the Tigers rose to the occasion and picked up a pair of victories as a result, with Marshall defeating Windom/MLA 38-28 and United 51-24.

Marshall coach Justin Bouwman said it took a team effort to come away with the wins and was pleased to see guys step up when called upon.

“It was a group effort; we had some kids that are hurt and we’ve got some things that we need to take care of, but a lot of guys stepped up,” Bouwman said. “It’s kind of been our motto, ‘Next man up’; they’re pulling for each other and being there for one another because not everyone’s going to have a great night every night.”

After the Cobras opened the meet with a 53-24 victory over United, Windom/MLA turned around to face the Tigers. Marshall jumped out to an early lead, as Brett Regnier won by a pin, followed by a technical fall victory for Dylan Louwagie (15-0), a 4-0 decision victory for Hsa Khee Lar and a forfeit win for Hsa Law Eh to give the Tigers a 20-0 advantage.

Windom/MLA would fight right back, though, with the Cobras taking four of the next five bouts by a pair of pins, a decision and a major decision to pull to within seven at 26-19. A forfeit victory for Noah Jensen was the lone Marshall points during that stretch, but the Tigers dug deep and secured the victory by winning two of the final four bouts. Grant Louwagie won by forfeit in the 170-weight class while Spencer Wambeke won by a pin in just 42 seconds at the 195-weight class to help the Tigers earn the 38-28 victory.

The Tigers then closed out the night against United. Unlike its previous matchup, Marshall would see a contested battle from United in the early moments of the dual. The Tigers took the first two bouts with a decision victory from Regnier over United’s Daniel Gunlogson (8-1) and a pin by Dylan Louwagie against United’s Adrian Norman (0:38), but United’s Tyler Schickedanz was able to get his team on the board with a pin to make it 9-6.

But that would be the closest United got to Marshall, as the Tigers took the next four bouts, including a Hsa Law Eh tech fall win (17-1) over Landen Knoshal, a Tate Condezo decision victory (7-0) over Dain Mortenson, a Connor Roth injury default victory and a 9-0 major decision victory for Jensen over Selvin Hernandez to push Marshall’s lead to 27-6.

After back-to-back pins by Trevon Johnson and Layton Wittnebel brought United to within nine, Marshall closed the match by winning four of the final five bouts. Grant Louwagie won by forfeit while Wambeke, Ethan VanHauwaert and Jackson Vierstraete all picked up a pin to give the Tigers the 51-24 victory and the sweep.

Bouwman said their key throughout the meet was their aggressiveness and drive.

“I think it was our aggressiveness and our ability to be ready to go,” Bouwman said. “We knew these were two big matches, the Windom match is a conference match and that sets us up for that goal that we want to achieve of being conference champs and Dawson’s a section match, we want to earn that No. 1 seed so that we can host here and do those things. The guys are putting in the work and are ready to go.”

Marshall will compete next on Saturday in the Big South Conference championships in Worthington at 10 a.m. Bouwman said their biggest takeaway will be to clean up some of the little things when they’re out there on the mat.

“Just little things that we’ve got to work on,” Bouwman said. “Fine-tuning some of our pinning moves, working on our takedowns, just a little bit of mat strategy and having ourselves in the right situation all of the time.” 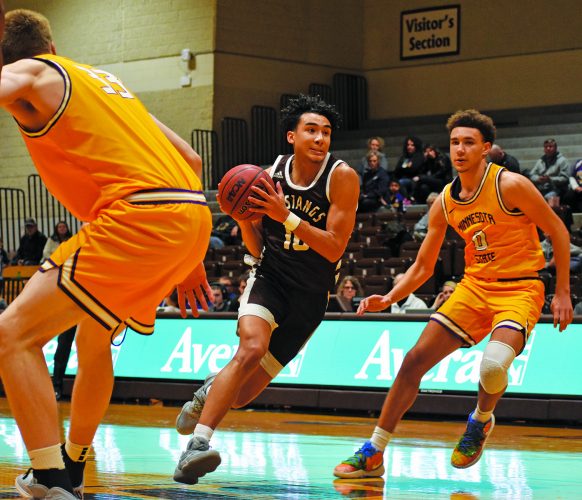 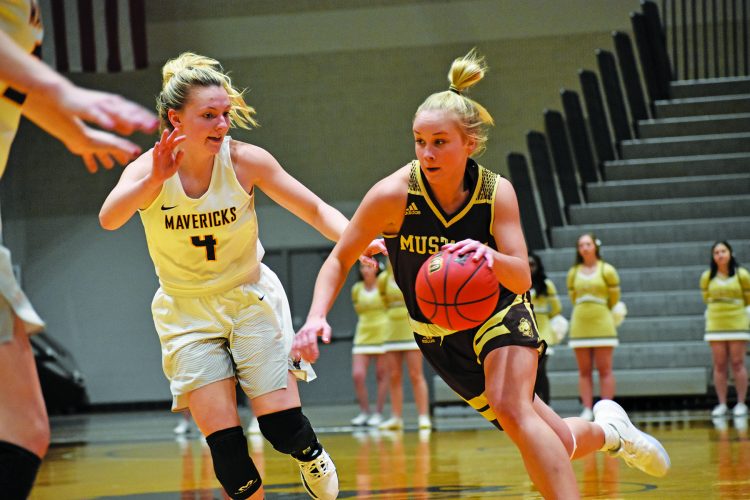