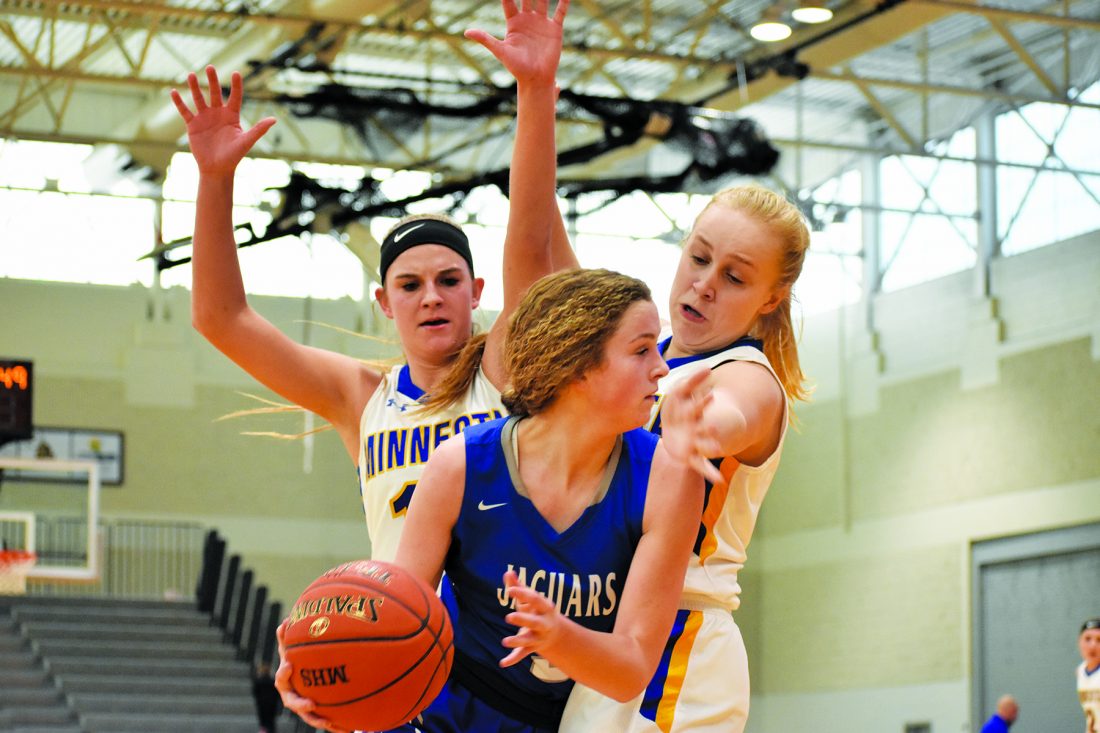 Photo by Sam Thiel Minneota’s Abby Hennen (left) and Abby Rost (right) defend a BBE opponent during their game on Tuesday. The Vikings defeated the Jaguars 45-44.

MARSHALL — The top-ranked Minneota girls basketball team has been on a strong offensive stretch in its recent string of games, averaging nearly 68 points per game in its past five contests. But Tuesday’s matchup against Belgrade-Brooten-Elrosa in the Borch’s Holiday Classic forced the Vikings to rely on its grit and resiliency when Minneota’s hot shooting turned cold.

Despite being held to a season-low 27.6 shooting percentage (16-of-58), including a 1-of-12 mark from beyond the arc, the Vikings were able to dig deep when it mattered most and came away with a narrow 45-44 victory over the Jaguars at Southwest Minnesota State University.

Minneota coach Chad Johnston credited BBE’s defense for consistently challenging their players and added they just couldn’t get anything going on the offensive end.

“What do you do when you can’t hit shots? BBE played good defense, their post player changed a lot of things and she was there to help out a lot. In the first half we had wide-open layups that we just couldn’t get to go down,” Johnston said. “We never really got hot from the 3-point line and I think it started getting in girls heads. Anything that we set up, we could get a look, we just couldn’t make a shot; you could set up all of the best players in the world and if the ball doesn’t want to fall through the net for you, it doesn’t matter. BBE attacked us well, they got a good inside-out look against us and they made shots when they needed to.”

Getting a late push

It was a slow start for both sides, as BBE held a slim 7-5 lead before Minneota answered with a 7-0 run highlighted by a 3-pointer from McKenna Yost and a layup by Abby Hennen to give the Vikings a 12-7 lead near the midway point. The Minneota defense then found a spark over the next few minutes, which led to quick transition baskets and a 20-9 lead for the Vikings with 6:14 left in the first half. Both teams traded points the rest of the way, but Minneota continued to hold at least an eight-point lead before heading into the locker rooms with a 24-16 advantage.

Down to the wire

Looking to continue to its late-half push, the Vikings instead saw the Jaguars jump out to a 5-0 start to the second frame before a Natalee Rolbiecki putback stopped nearly a four-minute scoreless streak for Minneota.

Just as it did in the early portions of the first half, both teams would struggle to control the ball and generate offense, before a BBE layup made it a four-point game at 30-26 with 10:46 left. The Jaguars continued to whittle away at their deficit and got a 3-pointer and a layup to take the lead at 40-39 with 2:25 left, but Abby Hennen answered right back for Minneota with a layup with two minutes remaining.

On the ensuing possession, BBE got a layup to go with a little more than a minute left, but once again, the Vikings had a response, this time with Jeren Rost getting a putback to give Minneota a 43-42 lead with 45 seconds left.

The Jaguars had a chance to take the lead on their next trip down the floor, but the go-ahead attempt couldn’t fall, and Abby Hennen was fouled and connected on two free throws to make it 45-42. BBE got a layup in the closing seconds, but Minneota held on to escape with the win.

Minneota (10-0) will face CMCS on Friday at 7:15 p.m. Johnston said their biggest takeaway is that they know that they’re going to have nights struggling to shoot the basketball at times, but wants his team to be able to find other ways to create opportunities to win games when that happens.

“It’s something that we preach all of the time, sometimes shots are just not going to fall. If they’re not going to fall, you’ve got to find other ways to score or you’ve got to have something else in your game that creates something or you have to make sure you’re doing the little things right,” Johnston said. “We talked about it afterwards, you’re going to have those nights. We shot extremely well over the weekend, we shot great in Sioux Falls and shot terrible here. We’ve got to figure out how to win ballgames and the girls did.”