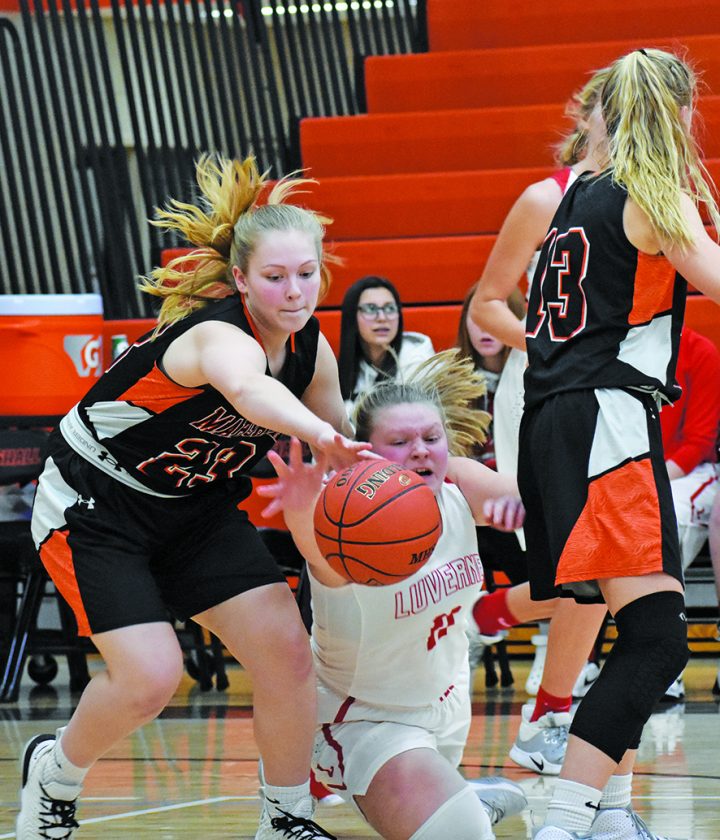 Photo by Sam Thiel Marshall’s Megan Wegner knocks the ball away from a Luverne opponent during their game on Tuesday. The Tigers defeated the Cardinals 56-24.

MARSHALL – After achieving their goal of obtaining a perfect record going into 2020, the No. 8 Marshall girls basketball team nearly dropped its first game of the season to start the New Year before roaring past Mankato West in a second-half comeback on Saturday.

On Tuesday night, the Tigers got back to a smoother routine, delivering a 1-2 combination of a daunting defense and quick scoring bursts to help Marshall take down Luverne 56-24 and remain undefeated.

Marshall assistant coach Zach Stelter said they were pleased with their start on both sides of the floor to begin the game and felt that helped set the tone for the rest of the night.

“We were really happy with how we started off the game, applying some pressure defensively, getting stops and then getting easy baskets, that was kind of the key to the start of the game,” Stelter said. “We got them rattled with our pressure and created turnovers and that was able to lead to easy offense for us. We’re just happy with the way we started both halves, it was really huge for us.”

Establishing their presence on the defensive end early, the Tigers quickly forced Luverne into multiple turnovers to begin the game. The consistent pressure helped Marshall get out in transition on the other side of the floor, as Corrin Naughton scored the first five points of the game for the Tigers before they later pushed their lead to 11-0 in the opening minutes.

After a Luverne basket stopped nearly a four-minute scoreless streak to begin the game for the Cardinals, Marshall continued to keep its foot on the gas pedal. A 3-pointer by Natalee Sample gave the Tigers a 20-point advantage at 27-7 with 6:25 to go in the first half, before the Cardinals got a layup and a 3-pointer to draw to within 17. But that would be the closest Luverne got, as Marshall held the Cardinals scoreless throughout the final three minutes of the half to take a 37-12 lead at the break.

Looking to continue its strong play on both sides of the ball, the Tigers traded points with the Cardinals in the early parts of the second half before a 3-pointer from Jordyn Hilgemann gave Marshall a 48-16 lead. The Tigers then turned to its reserves for some quality minutes, as an Adrianne Simpson 3-pointer gave Marshall a 40-point advantage with 8:30 to go before ultimately earning the 56-24 victory.

Hilgemann led the way for the Tigers with 16 points while Emily Meier added 13 and Abby Wendorff had 11. Meier led in rebounds with five while Lenei Estrada led in assists with seven. As a team, Marshall shot 43% (22-of-51) from the field, including hitting five 3-pointers and going 7-of-9 from the free throw line.

Defensively, the Tigers held the Cardinals to just 23% shooting (9-of-39), including allowing just one 3-pointer while also forcing 25 turnovers.

Stelter said their pressure was the biggest key to their success on the defensive end, as Marshall held Luverne to just 12 points in both halves.

“Our pressure did a lot of that. We kind of backed it off more in the second half, but I think in the first five or six minutes of that half, we held them to four points,” Stelter said. “We just applied pressure, got them rattled; our girls worked really hard getting to their spots and forced turnovers, so it’s what we want to do.”

Marshall (12-0) will continue its homestand on Friday against Pipestone Area at 7:15 p.m. before facing Mankato East on Saturday. Stelter said they need to be able to be ready to go right away against a pair of tough opponents and just continue to work on little things from each game.

“We’ve got a busy week, we’ve got Pipestone on Friday and then another home game against Mankato East on Saturday, so we need to be ready to get back to work,” Stelter said. “Obviously, every single game there’s things that you take away that you want to work on; I think one of those things from this game was our ability to move the ball, sometimes they went zone against us and we got stagnant at times, so just moving the ball around and getting everyone else involved is something to work on.”