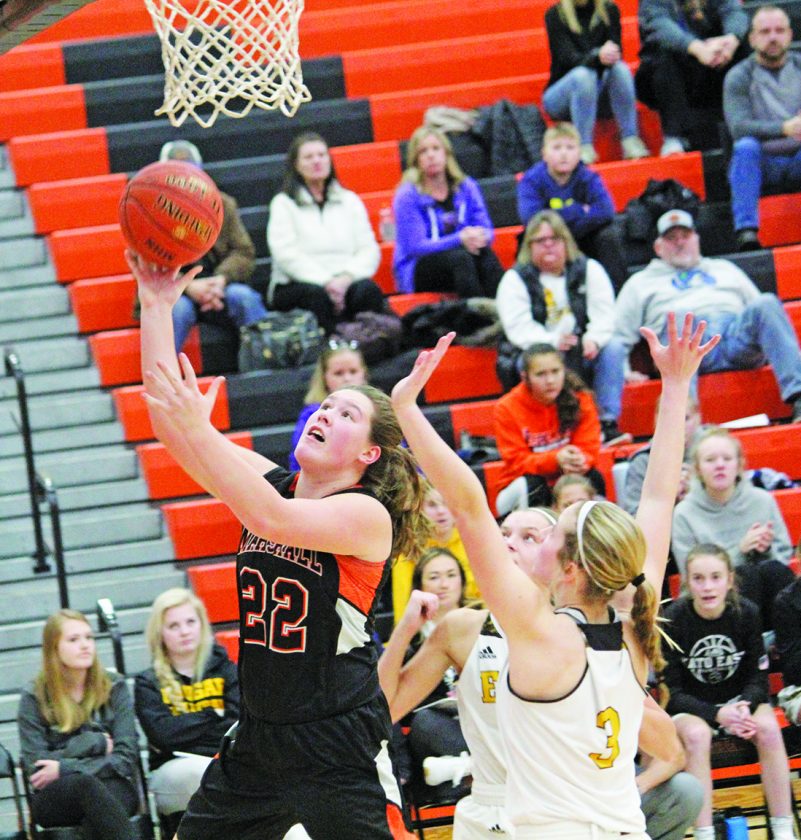 Photo by Jake Przytarski Marshall’s Abby Wendorff goes up for a layup during their game against Mankato East on Saturday. The Tigers defeated the Cougars 62-28.

MARSHALL — With only a single field goal surrendered during the entire first half of Saturday’s matchup against Mankato East, the seventh-ranked Marshall girls basketball team was bordering on perfection on the defensive end of the floor. The dominant effort culminated in a 62-28 dismantling of the Cougars–moving the Tigers to 14-0 on the season.

Tasked with the goal of limiting the Cougars’ three top-scorers, Marshall coach Dan Westby was especially pleased with the way his team delivered on that assignment in multiple ways.

“We knew coming in that they had some players that we needed to cover up defensively and I thought we just did a great job of limiting shots,” said Westby. “They had one field goal at halftime and not only did we limit their field goals, I thought we limited quality looks. They just weren’t able to get a lot of quality looks at the basket and again that’s just a great job by our kids, so great defensive effort.”

Reaping the benefits of its stout play on defense, Marshall was able to set the tone early in the game offensively with eight unanswered points via a pair of baskets by Emily Meier and Corrin Naughton. Four of the eight points came off steals as Lenei Estrada made her presence felt early on in the first half with pressure that translated to points on the fast break.

“She’s undersized no question about it, but the thing that she does such a great job of is she uses her quickness,” said Westby. “She uses it both defensively and for rebounding. She’s just got a nose for the ball and we’re just always impressed by the things she does out there.”

After seeing their lead shrink to 8-4 following a pair of trips to the charity stripe by Mankato East, the Tigers put together their best stretch defensively that left the Cougars scoreless until late in the first half. During that span, Marshall kept its foot on the gas offensively with an astounding 22-0 run that made it 29-4. The Tigers went on to hold a commanding 38-9 advantage at halftime following a three-pointer by leading-scorer Jordyn Hilgemann in the final minute of play.

Marshall refused to let up when play continued for the second half as Meier opened the scoring with a smooth post move for a basket to give the Tigers a 40-9 lead. Following a pair of made free throws by Hilgemann, Meier struck again with another nifty move inside to make it 44-13.

Westby identified Meier’s quickness as one of the keys to her offensive success and praised her for the effort she’s put forth this season.

“She’s got a number of different moves she’s able to use inside and the other thing Emily does such a good job of is using her quickness,” said Westby. “I think she takes people by surprise and she’s done a lot of great things for us this season.”

Despite not utilizing the press for nearly the entire rest of the game, the Tigers faced no issues generating stops and made the most of offensive possessions en route to seeing their lead grow to 40 at 56-16. Marshall went on to win the game in a 62-28 blowout.

With problems arising in past games when the team abandons the press, Westby was relieved that neither the offense nor the defense was negatively impacted when they went away from it in the second half.

“We’re always concerned when we don’t press because it just feels like, and it shouldn’t be this way, but it just feels like we don’t do anything as well,” said Westby. “We don’t defend in the half court as well and we don’t even run our offense as well when we’re not pressing and I thought we did a better job with that. We didn’t press a whole lot in the second half, but our kids were still able to do everything that they needed to do.”

The Tigers will be back in action on Tuesday when they travel to Jackson to take on JCC at 7:15 p.m. Following their matchup with the Huskies, Marshall will take on Waseca on Saturday back on their home court. The two teams will provide the Tigers with a chance to see two vastly different styles, according to Westby.

“We go to Jackson on Tuesday and they’re playing a fast-paced style. They’re using the Grinnell (Iowa) system, so they’re trying to shoot the ball every 12 seconds,” said Westby. “Then we come back home on Saturday and play a very good Waseca team. So, we’re kind of facing both ends of the spectrum here this next week but that’s part of being an athlete and having to adjust to different styles and so we’ll see if we can do that.”