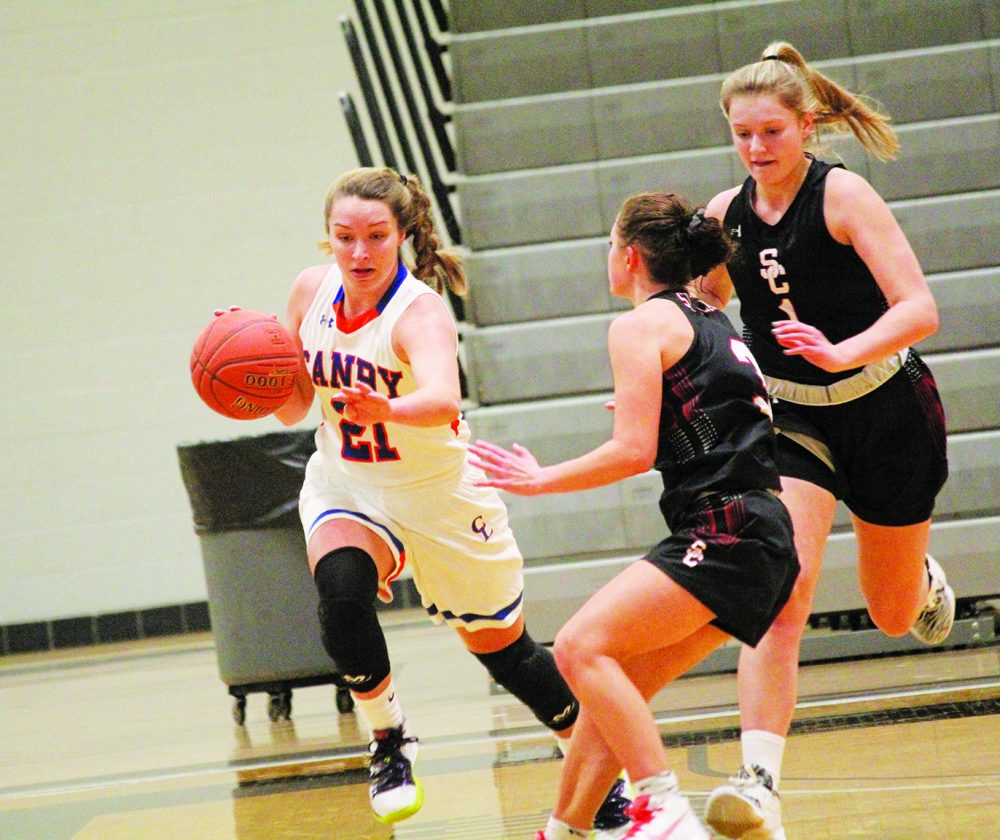 Photo by Jake Przytarski Canby’s RyAnn Hansen pushes the ball upcourt during their game against St. Clair on Tuesday. The Lancers fell to the Cyclones 58-52.

MARSHALL – Numerous inopportune fouls and turnovers proved to be the difference in the Canby girls basketball team’s 58-52 loss to St. Clair on Tuesday at the Borch’s Holiday Classic tournament. The loss drops the Lancers to 2-5 on the season.

Reflecting on his team’s performance, Canby coach Jeff Thovson was disappointed with the lack of ball control shown throughout the contest as a result of St. Clair’s full-court pressure.

“I thought St. Clair did a good job with their press. We played way too fast and turned the ball over too much. We played pretty poorly but hats off to St. Clair they did a great job,” said Thovson.

Despite the end result, the Lancers started off strong in the first half by going basket for basket with the Cyclones in the opening minutes of play before taking their first lead of the game at 8-7 following a made basket by RyAnn Hansen. Using a 7-3 run, Canby grew its lead to 15-10 minutes later, but were unable to protect it as a result of a rapidly growing number of fouls that put St. Clair in the bonus early.

The Cyclones, who attempted 21 free throws in the first half alone, capitalized on Canby’s undisciplined play defensively and climbed back into the lead at 17-15 following a three-pointer and a made free throw. Thovson said that the cheap fouls came as a direct result of lackadaisical play on defense.

“I think we get lazy (on defense),” said Thovson. “We stop moving our feet, we start playing defense with our hands and that’s where you pick up cheap fouls.”

With the boost provided at the charity stripe, St. Clair remained in the driver’s seat down the stretch of the first half and held a 31-27 lead at halftime. When play continued, the Lancers appeared poised to make a comeback as McKenzie Ruether knocked down a three-point shot that cut the deficit to three points, but turnovers and more cheap fouls spoiled the run and helped strengthen the Cyclones’ lead to 41-34 following an 8-4 scoring run.

Before the final buzzer, Canby was able to make it a one possession game twice more at 41-38 and again at 43-40, but additional turnovers and missed layups prevented the Lancers from getting over the hump and allowed the Cyclones to escape with a 58-52 win.

The team’s inability to close the gap boiled down to mistakes on their end, according to Thovson.

“I think we did it to ourselves,” said Thovson. “There were times that we missed matchups and they got wide open threes, and again congrats to them they took advantage of it. We weren’t focused at all today. We didn’t come ready to play.”

The Lancers will look to bounce back today when they host Windom at 7:15 p.m. Looking ahead, Thovson hopes to see his team more dialed in when the game gets underway.

“These kids have to learn to get focused before the game and ready to play. No matter who you play, they have to be focused and physically and emotionally ready to go,” said Thovson.