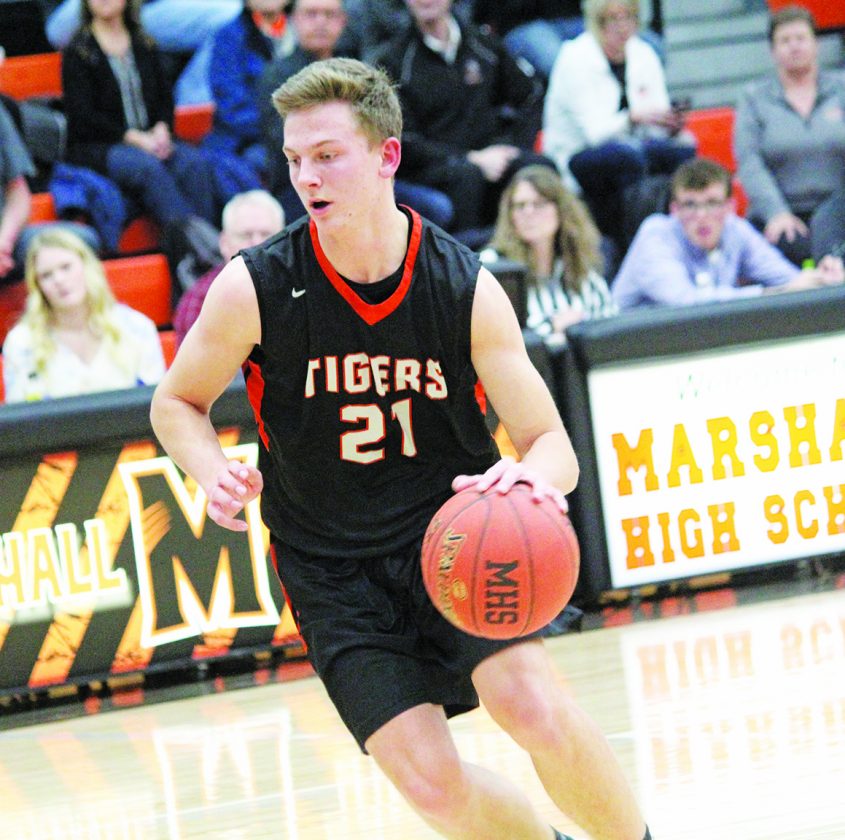 Photo by Jake Przytarski Marshall’s Matt Hmielewski drives into the lane during their game against JCC on Tuesday. The Tigers defeated the Huskies 95-58.

MARSHALL –Using a tone-setting 13-2 scoring run to begin the second half of Tuesday’s Big South Conference tilt, the Marshall boys basketball team turned an eight-point advantage at halftime into a 37-point blowout over Jackson County Central in a 95-58 final. The victory moves the Tigers to 6-0 in conference play and 13-1 overall.

Marshall coach Travis Carroll was pleased with his team’s play in the first five minutes of the second half after struggling to get into any sort of rhythm in the latter half of their previous game against Mankato East.

Led by a red-hot shooting display by JCC’s Rudy Voss who finished the game with a school-record 43 points overall and 24 in the first half alone, the Huskies established the early momentum with a 10-5 lead in the opening minutes of play. With the Tigers unable to contain him, Voss went on to score 18 of the team’s 20 points as the Huskies remained clinging to a two-point advantage at 20-18 midway through the half.

Carroll said the team needed to do a better job of limiting Voss through defensive adjustments.

“We didn’t come out ready to play the first five minutes of the game and we got behind and we weren’t defending as well as we needed to to begin the game and it kind of put us behind the eight ball a little bit,” said Carroll. “We needed to do a better job of adjusting early and throughout the game defensively.”

The Tigers put the disappointing start behind them down the stretch of the first half with a 14-4 run that gave them their largest lead to that point at 32-24 following a basket by Matt Hmielewski. Marshall remained in control before the buzzer and added four unanswered points when Noah Puetz went to the line for a shooting foul and a JCC technical that gave the Tigers a 42-30 lead at the break.

Flipping the script from their previous second half start against the Cougars, the Tigers set the tone immediately out of halftime with seven unanswered points to take a 49-30 lead following a three-pointer by Konnor Aufenthie. Marshall’s defense followed the offense’s lead with numerous key stops, but still struggled to contain Voss.

Carroll said the team attempted to keep the ball out of Voss’ hands throughout the second half in order to limit his impact offensively.

“We were trying to get the basketball out of his hands and we missed a few opportunities, in the second half,” said Carroll.“He’s a very good basketball player and against a player like that you need to be ready to adjust, and we just didn’t do a very good job of adjusting throughout the game on him.”

With JCC unable to find scoring contributions elsewhere, the Tigers held a comfortable lead throughout the second half with their offense continuing to fire on all cylinders. Late in the game with Marshall up by 30, the Tigers’ reserves took over and closed out the game with a 12-6 scoring run to win 95-58.

The Tigers (13-1) will travel to Sioux Falls, S.D. for their next game against Lincoln on Thursday at 7 p.m. Carroll expects rebounding and defense to be critical to their success in the upcoming contest.

“They’re a very physical basketball team, rebounding is going to be extremely important against them and defending personnel,” said Carroll. “They’re going to try to get us out of our flow offensively and it’s a game we’re going to have to win on the defensive end of the floor.”