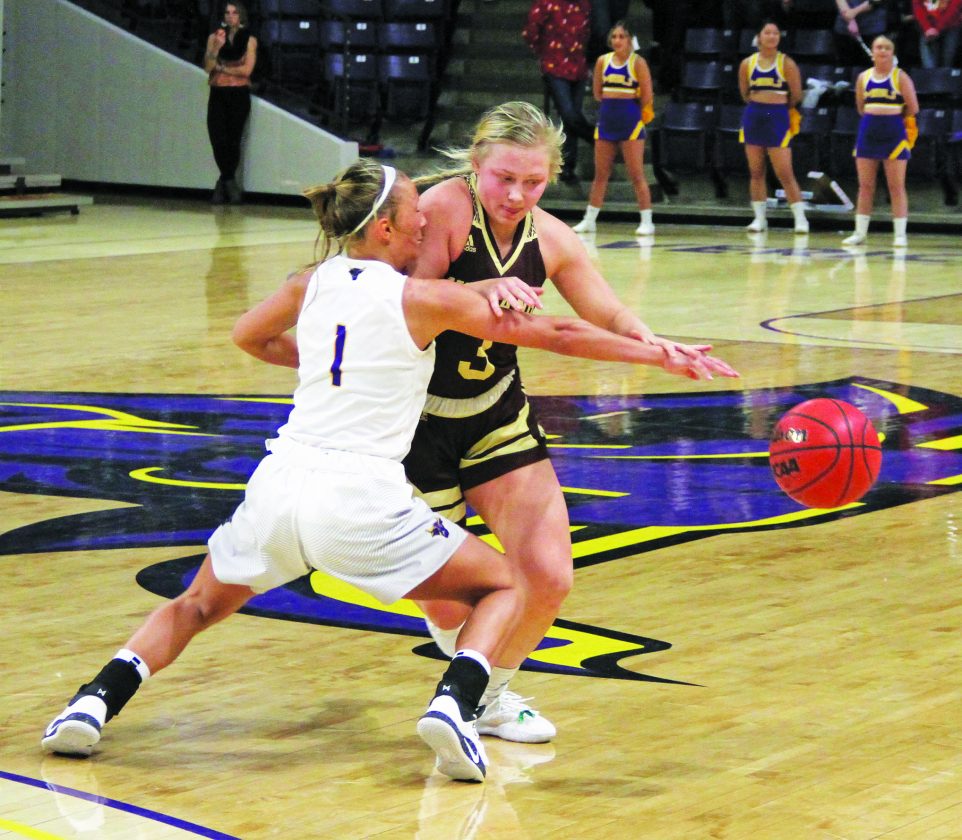 Photo courtesy of SMSU Athletic Communications SMSU’s Sadie Stelter tries to fend off MSU Mankato’s Joey Batt during their game on Friday. The Mustangs fell to the Mavericks 76-60.

Sadie Stelter scored a team-high 17 points with three 3-pointers and also grabbed six rebounds to pace the Mustangs. Sam Wall made 4 of 7 shots with a pair of 3-pointers to finish with 13 points, while Meleah Reinhart added 10 points. Abuk Akoi tied a season-high with 12 rebounds and recorded three blocked shots. Akoi in the process became the sixth player in program history to reach 100 career rebounds.

SMSU struggled to open the game missing its first six shots in the first five and a half minutes to trail 14-0. The Mustangs answered the run with a 9-2 spurt behind 3-pointers from Wall, Reinhart and Emily Buysse.

The Mustangs would continue to battle and would eventually cut the deficit to 18-15 following two free throws by Wall late in the first quarter.

MSU would hold a 22-17 advantage after one quarter of play, but SMSU would continue to battle and finally tied the game on a long-range 3-pointer by Stelter with four minutes left in the half to make the score 29-29.

The Mavericks countered with a 7-0 run, but once again the Mustangs had their own answer as Stelter drilled another 3-pointer to make the score 38-36 with 1:17 remaining in the half. MSU closed the half with five straight points to take a 43-36 lead into the halftime break.

The game would remain close deep into the third quarter as Wall hit two free throws to trim the MSU lead to 52-50 with two minutes left in the quarter. MSU would come right back and answered with eight straight points to take a 60-50 into the fourth quarter. The Mustangs shot just 38 percent, including 1 of 8 from 3-point range in the third quarter.

MSU would build the lead to 63-50 early in the fourth quarter, but once again SMSU would fight back and trim the deficit to 63-57 with seven minutes remaining following back-to-back layups by Reinhart.