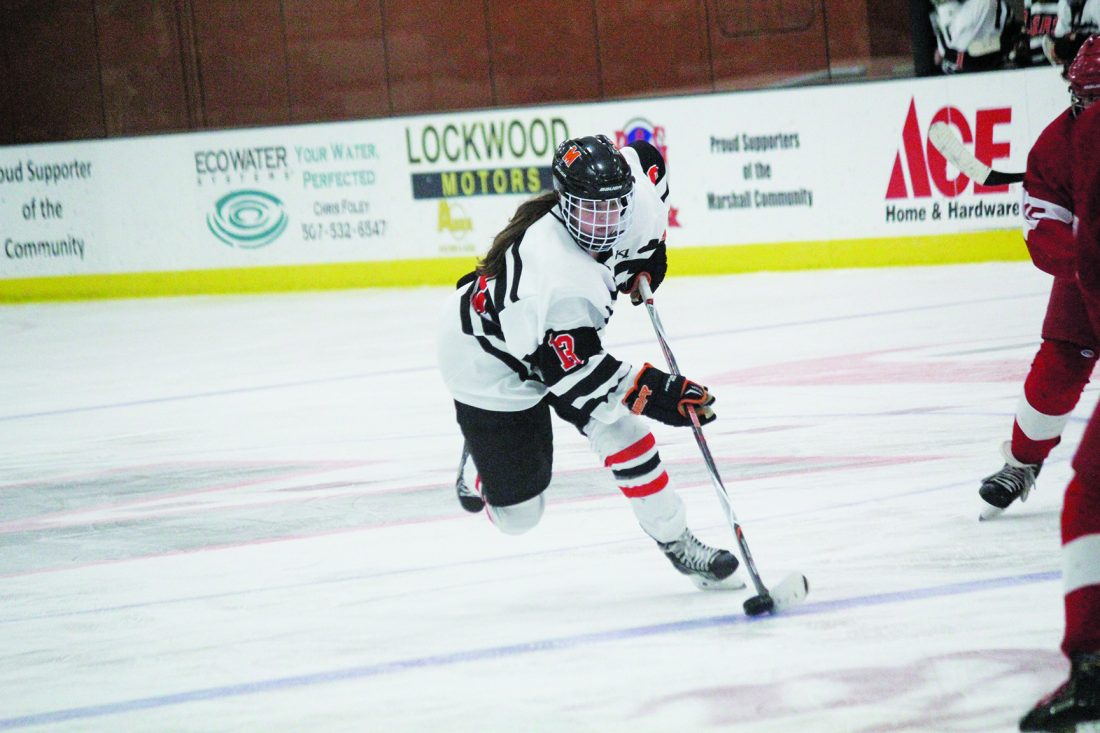 Photo by Jake Przytarski Marshall’s Kalyn DeVlieger controls the puck during their game against Luverne on Tuesday. The Tigers fell to the Cardinals 3-1.

MARSHALL – A pair of unanswered first period goals by rival Luverne put the Marshall girls hockey team behind the eight ball early on in Monday’s Big South Conference opener. The Tigers fought back with a strong second period surge, but were unable to complete the comeback in a 3-1 loss.

Marshall coach Cassi Weiss came away disappointed by the lack of aggression shown by her team after making it a point of emphasis leading up to the game.

“I think we gave a good effort but some of the little things weren’t there,” said Weiss. “We weren’t making crisp, hard passes and we weren’t always being super aggressive, which is something that we really wanted to do.”

Luverne’s go-to goal scorer Kamryn Van Batavia, who entered the game as the state’s third-leading goal scorer with 13 tallies in six games, provided an early glimpse of the challenge she would provide the Tigers’ defense by depositing her first of two goals less than four minutes into the first period.

Aware of the scoring threat Batavia poses every time she steps out on the ice, Weiss said the focus in trying to contain her was to limit odd-man rush opportunities.

“We just talked about limiting their odd-man rushes because usually her and Reghan Bork end up with a couple two on ones. So we wanted to limit those and just keep her to the outside,” said Weiss.

Things went from bad to worse for Marshall minutes later when Kaitlyn Timm was called for a five-minute boarding major that opened the door for the Cardinals to add to their lead on the man-advantage. Goaltender Emma Klenken turned aside numerous quality scoring chances on the ensuing penalty kill, but Luverne eventually broke through again to take a 2-0 lead into the intermission.

Though the start was less than ideal, Weiss said she was pleased with how the team responded to the adversity.

“You never want to get a penalty early on and then to get a five-minute, it’s disappointing, but you have to be able to come off of it and I feel like we kind of started to towards the end of that first period,” said Weiss. “At the end of the second period is when I really noticed that we started to kind of get in our groove.”

After getting outshot 21-4 in the opening period, the Tigers pushed back with sustained offensive pressure in the second frame that led to multiple opportunities to score. Though Marshall wasn’t rewarded with a goal at even strength, Weiss was pleased with the team’s turnaround in the period.

“We were aggressive and we were pesky,” said Weiss. “We were initiating our forecheck and we weren’t sitting back watching them in the offensive zone.”

Late in the period, Marshall went on its first and only power play of the game and capitalized with a goal. The power play tally was set in motion by a hard wrist shot by Timm that left a wide open rebound opportunity for Emelia Barker to bury her second goal of the season and cut the deficit to one.

The score remained 2-1 until the five minute mark of the third period when Batavia clinched Luverne’s victory with her second goal of the game to make it 3-1.