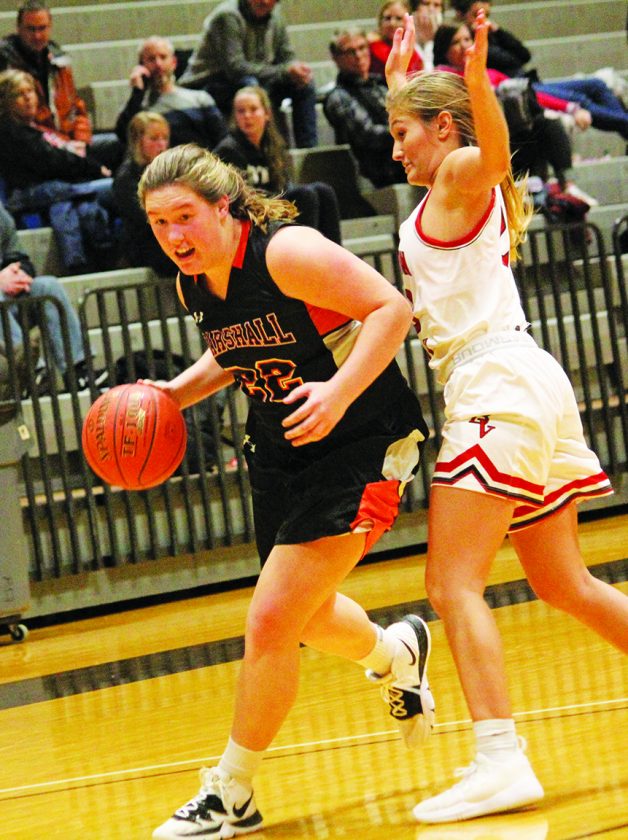 Photo by Jake Przytarski Marshall’s Abby Wendorff drives around a Brandon Valley (S.D.) defender during their game on Monday. The Tigers defeated the Lynx 67-53.

MARSHALL – The eighth-ranked Marshall girls basketball team knew it would take a spirited effort on both ends of the floor in order to come out on top against South Dakota’s defending AAA state champion, Brandon Valley, in their first matchup of the Borch’s Holiday Classic on Monday.

Utilizing a smothering effort on the full-court press, the Tigers delivered on both fronts by turning steals into fastbreak points to overwhelm the Lynx in the second half and escape with a 67-53 win.

Marshall coach Dan Westby praised his team for their relentless on-ball pressure that netted 29 turnovers in the contest.

“I thought our kids battled hard. I think again our pressure was pretty successful. I think we created just about 30 turnovers,” said Westby. “I think anytime you can do that, it just shortens the number of possessions that they get and increases the number that you get.”

In spite of the defensive success that was to come, the Tigers were forced to weather a storm in the first half of the contest with the Lynx dialed in offensively and knocking down open looks. With their shots continuing to fall, Brandon Valley was able to erase Marshall’s seven-point advantage midway through the half at 18-11, and went on to take the lead at 22-18 following an 11-0 scoring run.

With the court beginning to tilt to Brandon Valley’s favor, Marshall’s leading scorer Jordyn Hilgemann took over and helped spark a key scoring run down the stretch with back to back threes that gave the Tigers the lead at 26-24. Marshall went on to outscore Brandon Valley 17-6 into the halftime buzzer, giving the Tigers a 35-28 lead at the break.

Westby lauded Hilgemann for giving the team a needed boost with her offensive success.

“Jordyn has the ability to do that. I think she knocked down those back-to-back threes and that was a big boost for us,” said Westby. “She can be a quick strike scorer, and I think that was certainly the case here in the first half.”

Early in the second half, the Tigers were able to push their lead to double digits for the first time in the game after a pair of baskets by Abby Wendorff and a three-point play by Hilgemann made it 41-31. The Lynx would respond by scoring five unanswered points to cut the deficit to six, but that would be the closest they would come to tying the Tigers for the remainder of the game.

Marshall maintained its lead through the work of its full-court pressure down the stretch led by steals leaders Hilgemann and Natalee Sample. The two combined for 10 steals in the game and capitalized with numerous fast break baskets to extend Marshall’s advantage to double digits once more at 58-47. The Tigers never looked back, as they went on to win 67-53.

The Tigers (8-0) will take on Benilde St. Margaret’s today at 5 p.m. at the R/A Facility in their second matchup of the Borch’s Holiday Classic.