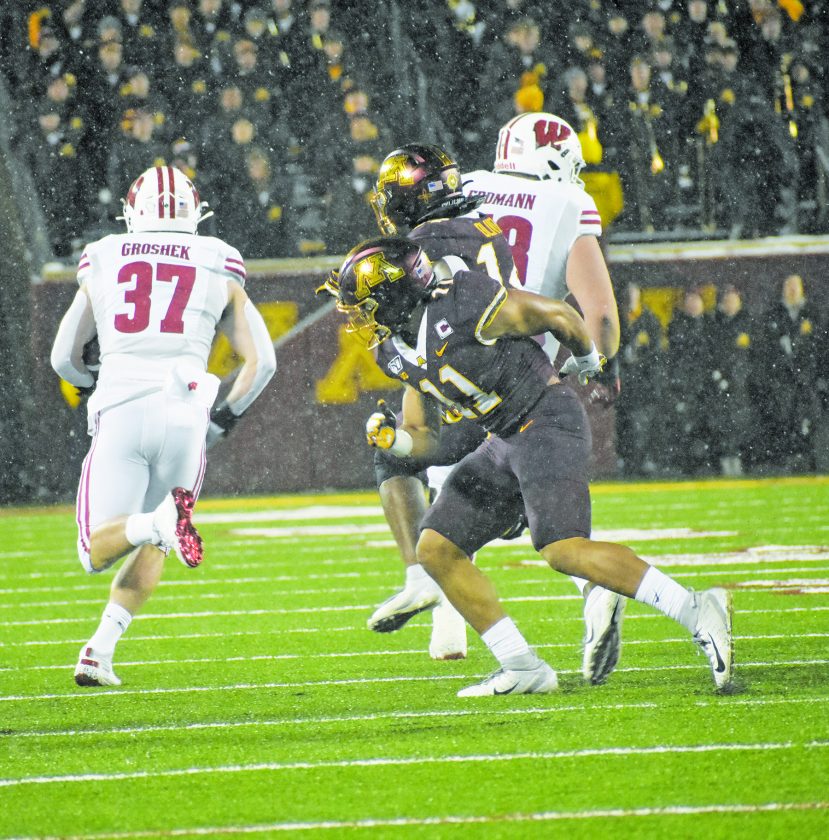 Photo by Sam Thiel The University of Minnesota’s Antoine Winfield Jr. (11) and Braelen Oliver (14) look back to pursue the University of Wisconsin’s Garrett Groshek as he heads upfield during their game on Saturday at TCF Bank Stadium. The No. 8 ranked Gophers fell to the No. 12 Badgers as Wisconsin took home the 38-17 victory.

MINNEAPOLIS — All week long, the excitement was there. The Gophers against the Badgers, one of college football’s oldest rivalries, College Gameday in attendance, all with so much more on the line than who would take the lead on an even split in the series.

A trip to the Big Ten Championship and possibly a Rose Bowl appearance to boot, not to mention the coveted Paul Bunyan’s Axe and the bragging rights that the Gophers had currently stored on their sideline. Although Minnesota had a hot start, Wisconsin’s ground game and defensive pressure quickly overwhelmed them, as the No. 12 Badgers got to celebrate their fourth West division title and reclaim the Axe with a 38-17 victory over the No. 8 Gophers in a snowy Saturday.

“First and foremost, congratulations Wisconsin and coach [Paul] Chryst on winning the Axe back and obviously becoming Big Ten West champs and the team that gets to represent us on the West side in Indianapolis,” Gophers head coach P.J. Fleck said. “They came here, earned it, took it and played really well. I give them a lot of credit, they’re a really good football team, just like they were at the start of the year. They made the plays when they presented themselves and we did not make the plays when they presented themselves.”

The loss not only dashes the Gophers’ (10-2) dreams of reaching their first Big Ten title game in program history but also affects their bowl game picture.

“It makes it sting more; being so close to reaching our goals, our goal that we set in January,” quarterback Tanner Morgan said. “We’ve done a lot of amazing things so far this season, it’s not over yet.”

With the packed TCF Bank Stadium in a deafening roar, the Gophers cranked the decibel level up by forcing a three-and-out before the offense struck on just their second play of the possession, a 51-yard ball from Morgan to Rashod Bateman to put Minnesota up early.

“Our details on that play worked and we were having fun out there,” Bateman said. “After that, I felt like the offense lost control of our details.”

But just as quickly as Minnesota had seemed primed for taking control, the Badgers answered back, overcoming a fumble with an interception before settling for a 26-yard field goal to get on the board midway through the second quarter. Wisconsin then added a touchdown on a Jack Coan pass to Jonathan Taylor on a wheel route to give the Badgers their first lead of the day at 10-7 going into halftime.

Despite their early half struggles on offense after the Bateman catch, the Gophers still were well within distance of getting themselves back in it. But Wisconsin had other plans, and it all began with the big plays. After a Gophers stalled to begin the second half, the Badgers capitalized with a deep strike from Coan to Quintez Cephus for 47 yards to make it 17-7.

Minnesota was able to drive into Wisconsin territory on its next possession, but was forced to kick a 38-yard field goal. Two plays later, the Badgers were celebrating in the end zone again, as a Coan pass to Mason Stokke set up a 26-yard run by Kendric Pryor to push Wisconsin’s lead to two scores at 24-10.

“A lot of the stuff they were doing, I was looking at it as it was happening. You see it quickly and then it replays in your head as a defensive player and you’re like, ‘Wow, that was a really well-drawn out play,'” senior defensive end Winston DeLattiboudere said. “Their offensive coordinator, give props to him and their offensive was firing off of the ball and then of course, you guys know about their running backs. They get that ball and they’re going to make something happen with it.”

The fourth quarter wasn’t much of an improvement for Minnesota, either. The Gophers went on another lengthy drive to begin the frame only to turn it over on downs at the Wisconsin 4-yard line. After Taylor found the end zone for the Badgers on the ensuing possession, Morgan would get sacked – one of five on the day – and give the ball right back at the Minnesota 18. It didn’t take Wisconsin much longer to tack on its fourth touchdown of the second half and dishearten the faithful of the Maroon and Gold as the snow began to fall even harder.

A 12-yard score from Morgan to Tyler Johnson closed out the scoring for Minnesota, but by then the game was well out of reach as the Badger players went and reclaimed the Axe before circling the stadium and chopping at the goalposts.

Minnesota finished the game with 372 yards of total offense, but was held to just 76 yards on the ground. Morgan went 20 of 37 for 296 yards, a pair of scores and an interception. He also set a single-season record in yards at 2,975 and wasn’t the only one to make history. Bateman broke the receiving yards mark in a season with 1,170 (147 against Wisconsin) while Johnson (89 yards) tied a Minnesota record in touchdowns at 31.

Wisconsin recorded 453 yards of offense on the game, rushing for 173 and passing for 280. Coan completed 15 of his 22 attempts while adding two touchdowns. Taylor, the All-America back, was held in check for the most part, averaging 4.2 yards per rush on his way to 76 yards on 18 carries while Pryor added 32 yards. Cephus hauled in five catches for 114 yards to lead the receivers.

Prior to the game, the Gophers celebrated their 15 seniors. Morgan said the group has had to overcome a lot throughout their time but added they were the foundation for what they’ve accomplished this season and beyond.

“You saw guys who have been through incredible amounts of change and adversity, who stayed and fought and came really close to reaching our goal, but those guys mean the world to this program because they set it up for success in the future of being a championship program and winning championships,” Morgan said. “Those guys set this program up for the future. Years from now, when you look at Gopher football, you’ll look at guys like Carter Coughlin, Kamal Martin, Rodney Smith, Shannon Brooks, Thomas Barber, all of those guys and think of what they meant to this program and what they mean to it and I love those guys to death and wouldn’t be here without them.”

After seeing their opportunity to host ESPN’s College Gameday, college football’s premier morning show against Penn State not come to fruition, the Gophers finally got their chance just two weeks later. And just as they did during Minnesota’s historic victory over the Nittany Lions, Minnesota fans brought the energy by packing Northrop Mall in the early hours before filling the stands at the stadium to the tune of 53,756 – a second consecutive home shutout.

Fleck said the atmosphere was incredible throughout the week and before the game and acknowledged the seniors for helping the program bring something special for their fans.

“I got a chance to go down to the Gameday set and be on set and that was epic,” Fleck said. “That was one of the greatest college football environment venues I’ve ever seen and that was right here at the University of Minnesota, where people say you couldn’t have that, you won’t have that, you’ll never have that… back-to-back sellout games, we have the capability to be whatever we want to be because of those seniors.”