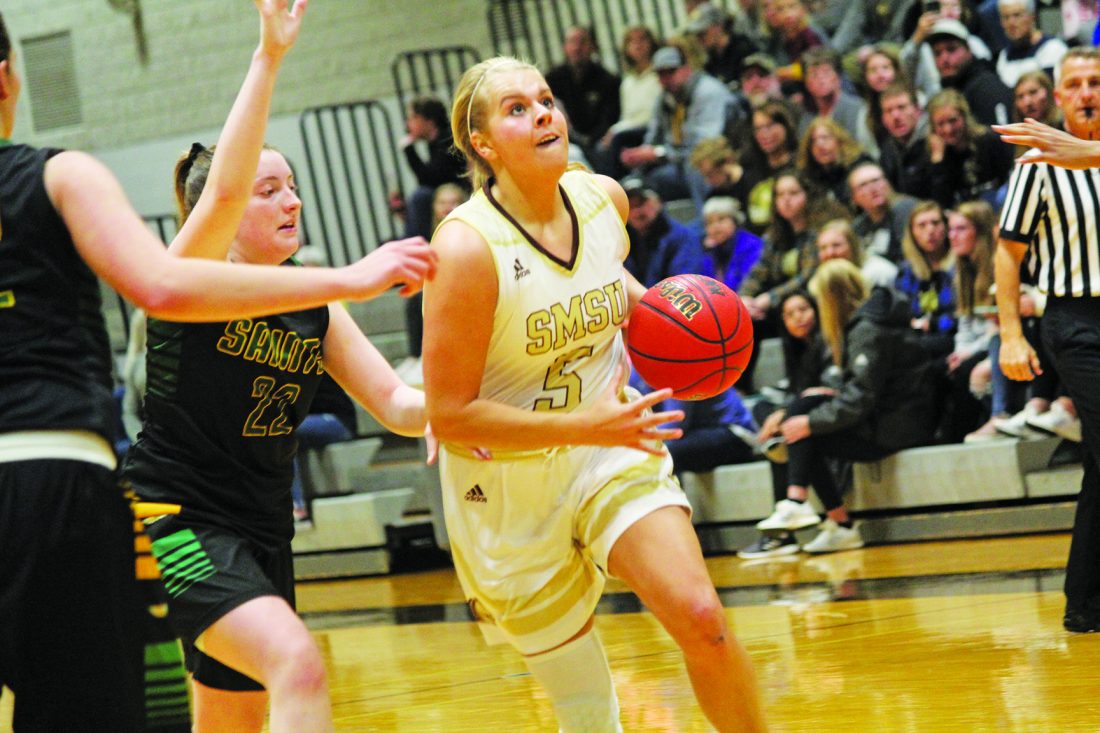 Independent file photo SMSU’s Caleigh Rodning drives past a Presentation defender during their game on Nov. 16. The Mustangs will face Concordia University (Ore.) and Western Oregon University this weekend.

•On Saturday, SMSU will take Western Oregon University (2-2) in Monmouth, Ore., at 4 p.m. (CST) inside the PE Building.

•Live stats and video for both games can be found at SMSUmustangs.com.

Series history vs. this weekend’s opponents

•This is the first time in program history that SMSU will face either Concordia (Ore.) or Western Oregon.

•In fact, SMSU has only played two current members of the GNAC in program history. SMSU won at Alaska Fairbanks on Dec. 16, 2006, before losing at Alaska Anchorage on Dec. 17, 2006.

•The 2019-20 season is the 51st of women’s collegiate basketball at SMSU and has amassed 597 all-time victories.

•SMSU started the season 3-0 for the first time since the 2007-08 season. SMSU suffered its first loss of the season last Wednesday in its conference opener at NSIC South Division favorite, Sioux Falls, 100-77.

•Junior guard Meleah Reinhart is leading the Mustangs in scoring with 17.3 ppg and has made 18 of 19 from the free throw line. She is also shooting a team-high 52 percent from the field.

•Sophomore guard Jenna Borchers has connected on a team-high 11 3-pointers.

•SMSU is averaging 74 ppg, while opponents are averaging 62 ppg.

•SMSU was ranked eighth in the first regional poll released on Nov. 19.

•Each of the eight regions has six representatives from D2SIDA that coordinate the regional committee, with a regional poll that will be released every Tuesday during the regular season.

•The D2SIDA weekly rankings are independent of the official NCAA Regional Rankings that will be released towards the end of the regular season and determine the NCAA Tournament teams.

•Concordia is 1-5 on the season and will play its first home game of the season on Friday. CU split two games last weekend, defeating Regis (Colo.), 76-65, before losing to Colorado School of Mines, 69-57, on Saturday.

•The Cavaliers finished 16-13 overall last season and tied for fifth in the GNAC at 11-9.

•Junior guard Olivia Vezaldenos had connected on 20 3-pointers and leads the team in scoring at 14.8 ppg.

•Freshman guard Dorcas Wu is averaging a team-high 5.5 rpg and ranks second on the team with 10 ppg.

•Sean Kelly is in his sixth season as head coach and holds a 61-86 record.

•Senior forward Shariah Green had connected on six 3-pointers and leads the team in scoring (11.5) and rebounding (5.5).

•Holli Howard-Carpenter is in her seventh season as head coach and holds a 47-118 record.

•Caleigh Rodning is fifth in rebounding and eighth in free throw pct.

•Abuk Akoi is tied for first in blocked shots.

UFC, boxing back on in Vegas after Nevada approves return

Home gardeners can help the hungry by donating some harvest