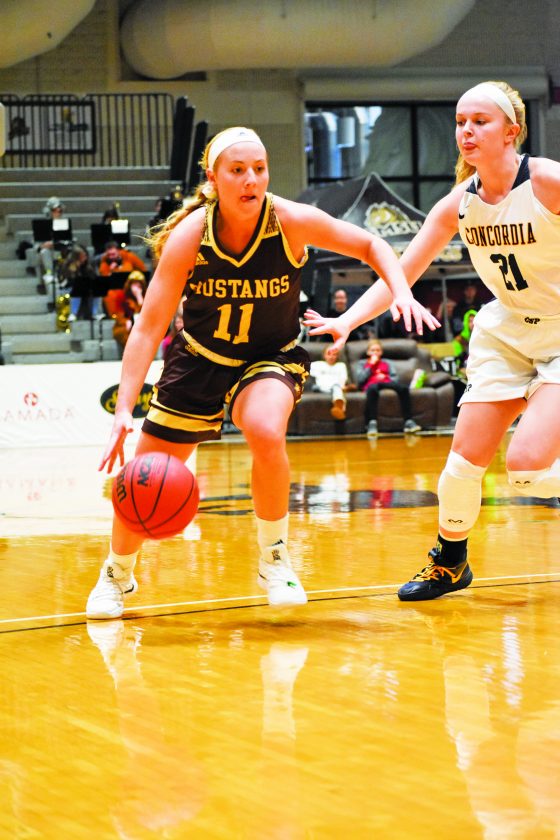 Independent file photo In this Dec. 8, 2018 file photo, SMSU’s Jenna Borchers drives to the basket during an NSIC game against Concordia-St. Paul. The Mustangs are set to open their season today in Wichita, Kansas against East Central (OK).

MARSHALL  — Last season, the Southwest Minnesota State University women’s basketball team made significant strides with a young group, boosting its win total from 2018-19 by seven on its way to a 12-16 record.

With nearly the entire team returning from a season ago, the Mustangs will rely on a more experienced core and look to keep moving forward under coach Tom Webb, who is heading into his fourth season with the program.

“It’s exciting,” Webb said. “We have our third recruiting class with us now and we have four-year program kids with us with Caleigh and Emily and it’s exciting to have everyone around that kind of understands our system, culture and style of play.”

Leading the charge will be the now-junior class that accounts for seven of the 15 players on SMSU’s roster. Meleah Reinhart (11.7 points per game, 43 3-pointers last season) and Sadie Stelter (9.6 ppg, 56 assists) will anchor the backcourt while Erin Baxter (9.6 ppg) and Abuk Akoi (5.7 rebounds per game, 25 blocks) spread out the offense in the frontcourt.

Webb said their ability to be at a consistent level each day on and off the court will be the biggest key for their group.

“I think the biggest jump is consistency, you hope for that group all to be more consistent on and off the floor,” Webb said. “Leading statistically on the floor, defensively, all of those things have to be consistent and as you get older I think you expect consistency and it’s exciting to see that and hopefully we’ll get that all of the time.”

The Mustangs will have a few seniors leading the way as well. Caleigh Rodning led the team in scoring last season at 13.5 ppg while also collecting nearly eight rebounds per contest. After watching her sister Sarah lead the team as the lone senior a year ago, the younger Buysse sibling Emily will hit the court as a veteran leader after connecting on 15 3-pointers and adding nine rebounds as a junior. The final senior on this year’s team is Taylor Bonestroo.

SMSU also features a couple of newcomers this season, including freshmen Sam Wall and Madison Gehloff. Wall averaged 20.7 points per game last season for Maquoketa Valley High School while Gehloff wrapped up her career at Waseca High School with 1,983 points and 937 rebounds.

Webb said both Wall and Gehloff are extremely competitive and athletic kids who will be able to earn some key minutes on the court throughout the season.

“They’re both good players, they’re both competitive kids and athletic. Both Madison and Sam are going to compete and push for minutes; they both can shoot the ball really well but I think their biggest strengths is their ability to defend at a high level,” Webb said. “As soon as they understand the scheme defensively, they’ll be able to really defend because they can defend one-on-one right now just more schematically.”

Webb added their expectations are to win each day they step onto the floor and continue to take steps forward.

“You want to make another jump. I don’t want to put too many numbers on it because you could limit yourself at the same time, but you just want to get better every day. If we get better every day, we’re talented enough to make a good run and see where we end up,” Webb said. “Our motto is ATD, which is Attack The Day, and that’s all I want to do is worrying about attacking the day and if we worry about attacking the day, we’ll be in good shape.”

SMSU will begin its season today at the Newman Classic in Wichita, Kansas, with a matchup against East Central (Okla.) at noon before facing Ouachita Baptist (Ark.) on Saturday at 10 a.m. Webb said the first games will be a good chance to see where their team stacks up and they’ll be able to start making adjustments once the season gets underway.

“First you want to see where you stack up; East Central is a good basketball team, they won 21 games last year and I think they feel like they should have been in the regional, they’re in the top 10 in the region, so it’ll be good to see where we stack up. I think we feel like we can defend them, I think we feel like we can score and you’re just ready to roll the ball out and get going,” Webb said. “From there you can kind of gauge what you need to work on. It’s hard to gauge in a couple of scrimmages to know for sure because you’re still trying to figure out lineups and rotations and that’ll be the other thing for us is figuring out lineups and rotations.”