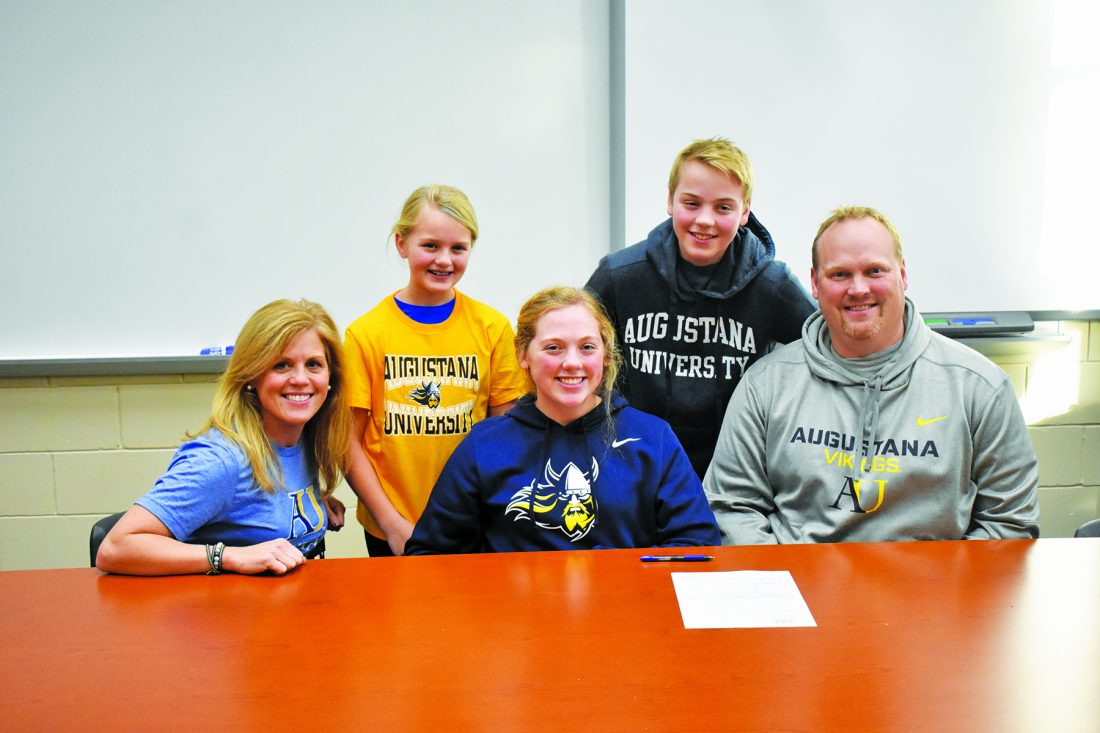 Photo by Sam Thiel Marshall’s Rachel Schwarz poses for a photo with her family before signing her National Letter of Intent on Thursday to play golf at Augustana University.

MARSHALL — The weather may be trending in the wrong direction, but Rachel Schwarz’s mind is set on the next few springs. The Marshall senior signed her National Letter of Intent to play golf at Augustana University on Thursday afternoon, surrounded by her family, friends and teammates.

Schwarz was relieved to finally have this day arrive.

“It’s a big relief because everyone is always asking, ‘Where are you going to college? What are you doing?’ and I can finally have a concrete answer and say that I’m going to Augustana,” Schwarz said. “So it’s really nice to have that load off of you and to know where you’re going.”

The past few years, Schwarz has helped guide the Tigers on the course. Last season, she qualified for the Class AA meet as an individual where she shot a two-day score of 179 and earned a tie for 32nd place. As a sophomore, she was a part of a Marshall team that took second at state.

Meanwhile, Augustana is coming off a fall season that saw the Vikings earn Top 10 finishes in each of their meets, including four first-place finishes and a team championship at the DII National Preview on Oct. 15.

Schwarz said she always knew that she wanted to continue to play golf and added that her family and the proximity of the campus were key contributors to her decision.

“I’ve always loved golf; I think it helps that our family is a big golf family and it’s a life-long sport that you can always appreciate, which is fun,” Schwarz said. “It’s also a nice distance from home so I can either go back or my parents can come and have supper with me; I’m a big family girl so that’s important to me.”

The Schwarz family is no stranger to the collegiate golf scene. Rachel’s older sister Ana currently is a member of the Bethel University women’s golf team and averaged a score of 79.3 and earned two Top 10 finishes while also helping lead her team to a first place finish at the MIAC Championships in September.

Schwarz said watching her sibling succeed at the college level has her excited for the next stage of her career.

“It makes me really excited because Ana would shoot 70 sometimes in high school, but now in college she’s shooting 75 and lower every time so it’s really exciting to think that I can be like her,” Schwarz said. “She’s a big inspiration to me.”

Schwarz added her teammates and coaches have had a big impact on her during her time at Marshall and she’s incredibly grateful for the support she’s received.

“I just have the best support ever. All of my coaches and teammates came to my signing and all of them love me so much and I can always count on them and I’m so grateful for that,” Schwarz said. “I think they’ve always pushed me to do my best and always work hard and then whatever comes, comes.”

Before she hits the links for the Vikings next year, Schwarz still has one season with the Tiger golf team. She said she’s looking forward to being with the team and using the experience she’s gained from her previous seasons and teammates towards her final year in a new role.

“I think just the team part because now when you’re finally a senior, that’s your time for leadership, so it’s fun to be able to pass on what other seniors have shown to me and be able to do that for all of the younger kids,” Schwarz said.