PREP BOYS HOCKEY: Holding it down at home 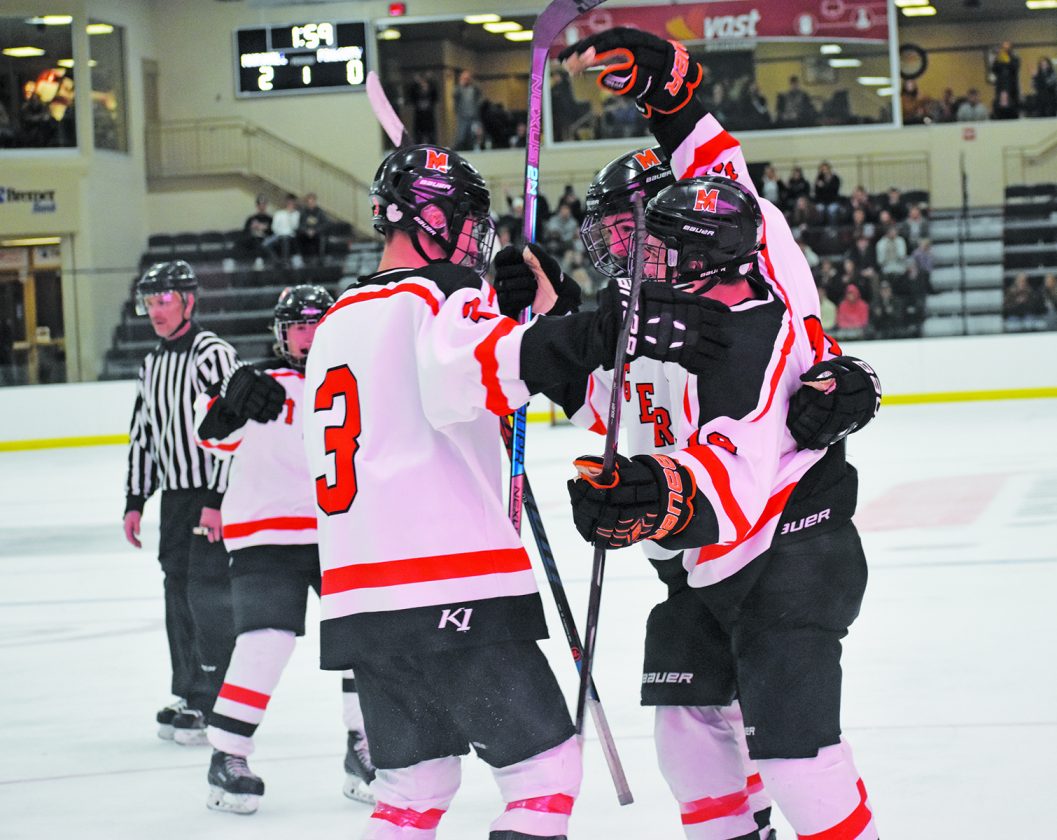 Photo by Sam Thiel Members of the Marshall boys hockey team celebrate after scoring a goal during their game against Pine City on Friday. The Tigers defeated the Dragons 4-0.

MARSHALL – After earning a thrilling overtime win last week to open its season, the Marshall boys hockey team returned home to an excited fanbase ready to see its team play on its own ice.

The Tigers, playing in their home tournament for the fourth year in a row, put on another solid offensive display, using a pair of goals in the first and second periods to highlight a 4-0 victory against Pine City on Friday night at the Red Baron Arena and Expo.

Marshall coach Michael Weiss said they’ve already learned a lot of things about their team so far in their first couple of games and felt they did a good job of improving from last week’s performance.

“It’s been a couple of good tests so far and we just learned a lot of things last week about being prepared and playing more defensive hockey and just playing systems better,” Weiss said. “I think we did a little bit better job with that here and we’ll have to keep getting better at it.”

Pine City came firing in the early portions of the opening period, testing the Tigers defense and goaltender Dominik Caspers with several shots on net as well as going on the power play early with a five-minute boarding penalty.

Marshall was able to get the puck free from its zone, though, as Bryson Whyte found himself with some skating room and buried the Tigers first shot attempt in the back of the net for a 1-0 advantage with 11:36 left in the frame. Both teams then went back and forth throughout the next several minutes, before Marshall created a couple more scoring opportunities late in the period. With just under two minutes left before the first intermission, the Tigers worked the puck around and eventually found Wyatt Boerboom, who snuck it past the goaltender on the assist from Joe Archbold and Jackson Bladholm with 1:59 remaining to extend Marshall’s lead to 2-0.

Looking to continue their momentum, the Tigers got out to a strong start to the second period when Archbold found Braxton Meyer in front of the net, who then punched it in to make it 3-0 with 13:49 left in the frame. Pine City would have an opportunity of its own to get on the board when Marshall was called for a roughing penalty, and despite putting multiple quality attempts on net, weren’t able to capitalize thanks to sprawling saves from Caspers.

Shortly after, the Tigers earned a power play opportunity of their own and made it count, as Whyte got his second score of the night on Archbold’s third assist to extend Marshall’s lead to 4-0 with 7:30 left in the frame.

Despite facing a large deficit, Pine City continued to attack and had a strong opportunity when Marshall drew a pair of penalties to set up a 5-on-3 for the Dragons. The Tigers were able to withstand the pressure, however, killing both penalties and keep Pine City off the board, ultimately earning the shutout victory.

Whyte said the key on the offensive end was just getting the puck to the net, but added their play in the defensive zone is how they’re able to generate strong scoring chances.

“We were getting pucks to the net,” Whyte said. “That was the most important part, but our defensive zone came first, that’s how we’re getting our offensive playing time.”

Despite being outshot on the game 31-22, the Tiger defense stood tall, particularly Caspers, who stopped all the shots he faced. Whyte said their ability to play from inside out and pressure Pine City was a driving force to their success on the defensive side of the ice, especially in the Dragons’ power play chances.

“Just playing from inside out,” Whyte said. “Coach Scott [Mellenthin] always talks about staying on the good side of the puck, pushing the outside of the boards and pressuring them, have them make mistakes and get the puck out.”

Marshall (2-0) will wrap up its weekend tournament today with a matchup against Fargo Davies in the championship game at 4 p.m. The Eagles defeated the Tigers 5-2 in last year’s tournament championship and rolled past Mound Westonka 6-0 in the opening game on Friday. Weiss said they just have to keep moving forward and learn from each game as they conclude the tournament and head into the rest of their season.

“We just have to keep on getting better and keep improving,” Weiss said. “That’s why we have these games and we already start section play next week, so we’re hoping to keep building and learning on what we need to do better.”

Most Medicare enrollees could get insulin for $35 a month