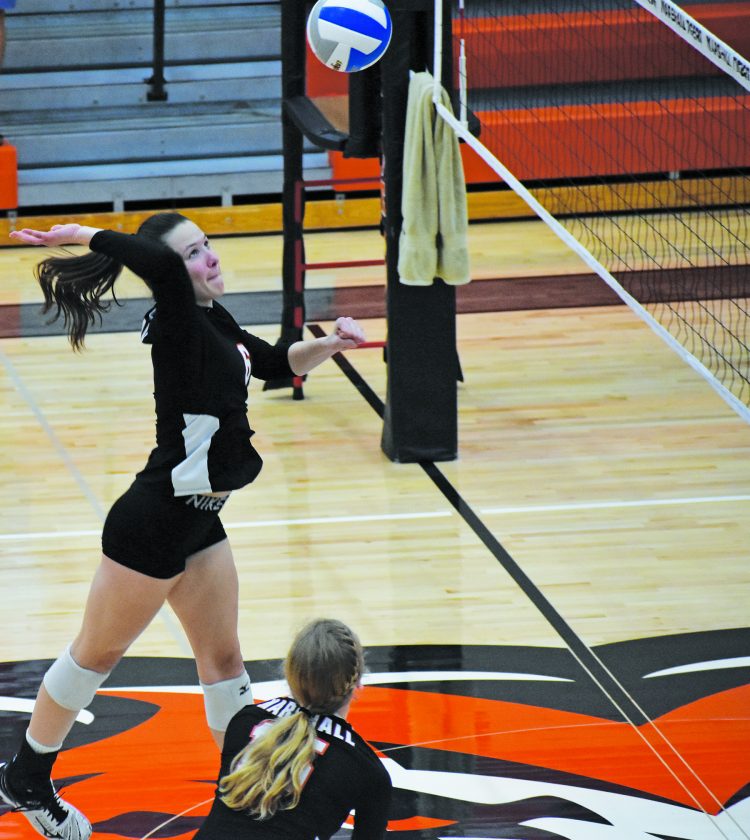 Independent file photo Marshall’s Paige Andries goes up for a kill during their match against Windom Area on Oct. 3. Marshall will begin its state tournament play today against Belle Plaine.

MARSHALL — The Marshall volleyball team’s bid for a Class AA title came just short a season ago when the Tigers fell to North Branch in five sets in the championship match. This time, the Tigers are focused on rewriting a different ending and are coming into the state tournament on a roll.

Marshall enters the tournament as the No. 2 seed with a 28-5 record and is coming off a decisive sweep over Minnewaska Area in the Section 3AA Championship on Saturday.

“The opponents we played throughout our section were certainly difficult,” Marshall coach Dan Westby said. “We played three conference opponents and that’s tough to do and then we turned around and played a team in the championship that was playing their best volleyball of the season. It wasn’t easy but to our kids’ credit, they got it done and we’re excited that we get another opportunity to go to the state tournament.”

Senior Bria Morris added that they’ve had the goal of getting back to the state tournament since last year’s championship match and knows there’s a lot of things they still want to accomplish as a group.

“We’re obviously very excited for everything; we have a tight-knit group, so that will help us,” Morris said. “We’ve been working really hard and we have that one goal in mind that we didn’t get last year, that’s why our theme is ‘Unfinished business’, we just have to keep working towards that goal.”

The Tigers will face Belle Plaine in their opening round match. Belle Plaine enters the tournament as a random draw with a 22-9 record after defeating Le Sueur-Henderson 3-0 in the Section 2AA Championship.

“They’re another team that’s probably playing their best volleyball of the season. They’ve got a very good player on the right side, a couple of good players on the outside that both take good swings on the ball and it’s going to be a tough matchup for us,” Westby said. “They were able to get through their section which is a pretty competitive section; I think if you look at the teams in the tournament this year, there are a number of teams that if they get on a roll they can win the whole thing, so it’ll be a very competitive tournament.”

While Belle Plaine will rely on a couple of players to lead them offensively, Marshall presents more of a balanced attack. Marshall will be led by a strong upperclassmen group, including Morris, Rachel Schwarz, Jordyn Hilgemann, Logan Sherman, Paige Andries, Kate Bucher, Keziah Knudson and Mia Schnaible.

Westby said their main focus in practice this week has been on improving their fundamentals such as serving aggressively or their ability to pass the ball.

“We’ve been trying to shore up some of the things that get away from you when you’re playing every other day like we had been doing when we were in our section,” Westby said. “The usual things that we think are so important like serving and passing are big areas for us and it’s been a quick turnaround since Saturday.”

This year’s trip is also the 29th time Marshall has reached the state tournament, setting a new state record.

Today’s quarterfinal match begins at 7 p.m. Going into the tournament, Westby said they’re looking forward to spending another week together and having an opportunity to do something special as a group.

“Just another week together; this group is pretty tight and just having that opportunity to spend more time together and be willing to go up there, put ourselves out on the line and see what we’re able to come up with,” Westby said.