Marshall bounces back to top Pequot Lakes in four sets 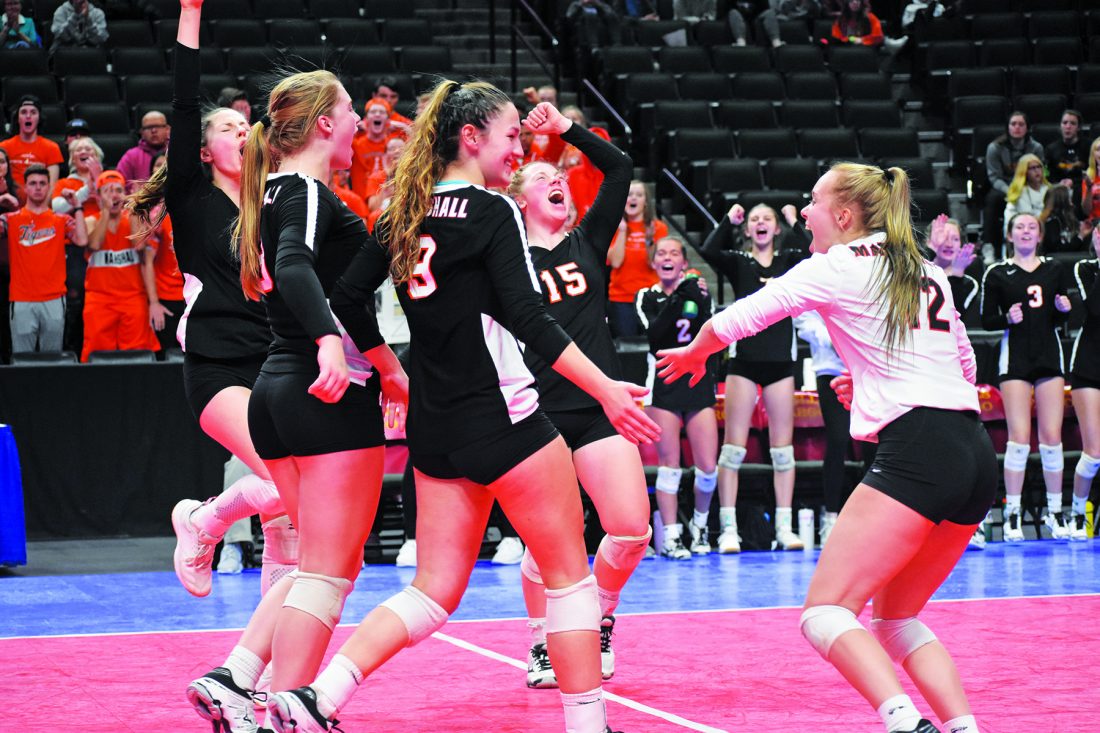 Photo by Sam Thiel Members of the Marshall volleyball team celebrate after scoring a point during their Class AA consolation semifinal match against Pequot Lakes on Friday at Xcel Energy Center.

ST. PAUL — Bouncing back from a tough loss can always be a challenging task. When the Marshall volleyball team fell to Belle Plaine in their Class AA opener, it was determined to not have that feeling again and was able to show its poise and resiliency once more in Friday’s consolation semifinal match against Pequot Lakes, using a comeback effort and some gritty play to keep its season alive.

Marshall dug itself out of an early 1-0 deficit and later out of more tight situations, including several occasions in Set 3. After the Tigers had tied things up at 1-1, Pequot Lakes came out firing on all cylinders to start the frame, going up 9-3. Marshall was able to close the deficit to within a few points a couple of times, but the Patriots still commanded the pace. Then, with Pequot Lakes looking to pull away late in the frame with a 21-17 lead, the Tigers’ never-say-die attitude came out in full force, as Marshall roared back to tie things at 22 before rallying for a 28-26 third-set win.

Marshall setter Rachel Schwarz said one of the biggest keys to their comeback efforts, particularly in third set, was being able to rely on anybody that stepped onto the floor for the Tigers and added that it helped boost their confidence as a group.

“It was so awesome just because we could count on anyone,” Schwarz said. “We didn’t just depend on Mia [Schnaible] to dig balls, Kate [Bucher] was flying all over the place, Emily [Meier] was digging up balls, we were just getting each other so excited and that really helped.”

Marshall was then able to cruise in Set 4 and earn a season-extending win. Going into today’s consolation final against No. 4 Watertown-Mayer, Schwarz added that they’ll look to use the previous two seasons as experience towards having a chance to play one more match and putting it all on the line.

“We’ve been in this position three years in a row of having a match on the last day, so I think we have some experienced players that can pass on their knowledge and just the motivation that only a few teams get to end their season on a win is going to help us pull through,” Schwarz said.