CLASS A VOLLEYBALL: Beginning their quest

Vikings open up state tournament play with a straight-set sweep over the Raiders, advance to semifinals 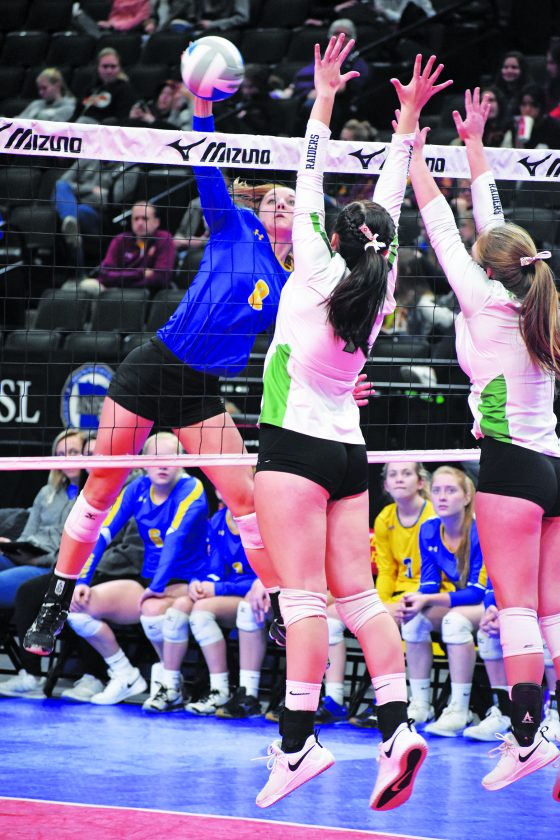 Photo by Sam Thiel Minneota's Natalee Rolbiecki connects on a kill during their Class A quarterfinal match against Greenway on Thursday at Xcel Energy Center.

ST. PAUL — The Minneota volleyball team knew things weren’t going to come easy in the opening round of the Class A tournament Thursday, especially since it was entering as not only the No. 1 seed, but also as the defending state champions.

Facing a unseeded Greenway team making its fifth overall appearance at the state tournament and first since 2001, the Vikings were able to escape a tightly-contested first set by the upset-minded Raiders before controlling the pace in a 3-0 (25-22, 25-15, 25-19) victory at Xcel Energy Center to begin their quest of clinching another championship.

With Claire Vekich guiding Greenway to the tune of a match-high 26 kills, Minneota coach Hayley Fruin knew they were going to have to slow her down in order to come out on top and felt they did a good job of overcoming some first-set jitters and be able to make necessary adjustments throughout the match.

“We knew coming in here that she was going to be one tough player to defend. The tough part is we haven’t really gotten a chance to watch them play too much, we just have a few clips on them, so we didn’t really know what to expect right away,” Fruin said. “I think the nerves kind of got the best of us that first set and we had a few errors on our side that we didn’t really need to have, especially when she was in the back row. After the first set, we changed up a few things; Abby Hennen started playing in the middle a little bit more and then she played in the left back spot and we also changed some things defensively.”

Minneota was immediately pushed to the limit in the opening set, as the Vikings’ early 5-1 lead quickly evaporated before the two teams found themselves deadlocked at 10 apiece. Each time the Vikings were able to take a small advantage, the Raiders answered right back to keep things close.

Despite the tight play, Minneota never found itself in a deficit throughout the first frame, as a Natalee Rolbiecki kill gave the Vikings a 22-19 lead. Greenway was able to get the next three points to tie it at 22 apiece, but Minneota took the final three points of the set to earn a 25-22 win and take the early advantage in the match.

Abby Hennen said they know the importance of winning the first set and felt that helped set the tone for their play in the second and third frames.

“The first set in every game is super important because if you win the first set, you’re up 1-0 and you have all of the momentum to your side,” she said. “Winning that [first one] was really big going into the second set and we knew that they’d be coming out firing for the second set, so we had to start off not getting in a hole and I think we did a good job of serving aggressively in the second set to get ourselves a lead.”

The Vikings might have clinched the momentum early, but the Raiders were far from done, as Greenway began Set 2 with its first lead of the afternoon before pushing its advantage to 8-5. Just like it did in the first frame, Minneota came up with a response by using an 8-3 run to take a 13-11 lead before later pushing it to double digits to win Set 2, 25-15 and take a 2-0 lead in the match.

Set 3 went back to the Vikings to start, with Minneota claiming a 5-3 lead, but the Raiders rallied back to tie things up at 7-7. In need of another boost, the Vikings got it thanks to kills from Abby Hennen, Abby Frie and Rolbiecki along with a string of Greenway errors to push Minneota to a 15-9 advantage.

The Raiders weren’t going to go down without a fight, though, closing their deficit to within four at 18-14 and again at 22-18, but Minneota slammed the door shut on any Greenway comeback hopes by taking three of the final four points and advance to the semifinal round with a 25-19 Set 3 win.

Abby Hennen said their key on the offensive end was their ability to read the blockers and mix up their placements to keep the Raider defense guessing.

“The biggest thing to read when you’re an outside hitter is where the block is; if they’re going to block you all the way out to the pin, then you have to try and hit across or just hit high hands,” she said. “I thought our setters did a really good job of pushing us out to the pins so we could either go down the line or across, so that’s a lot better when the setter gets you out there, then you can make the decision based on where the block is.”

Minneota (31-3) will face No. 5 Fosston in the semifinal round today at 1 p.m. The Greyhounds defeated No. 4 Mounds Park Academy in a five-set comeback. The matchup is also a rematch of the 2001 Class A Championship.

Fruin said they need to come ready to play as well as continuing to stick to their gameplan.

“Definitely don’t overlook anybody and we need to come fired up and ready to go,” Fruin said. “We’ve got to play together as a team; we’ve got one under our belts, so hopefully the nerves aren’t there like they were [Thursday] and just play loose. If we can just serve aggressive and if we can pass, we’re tough to defend.”