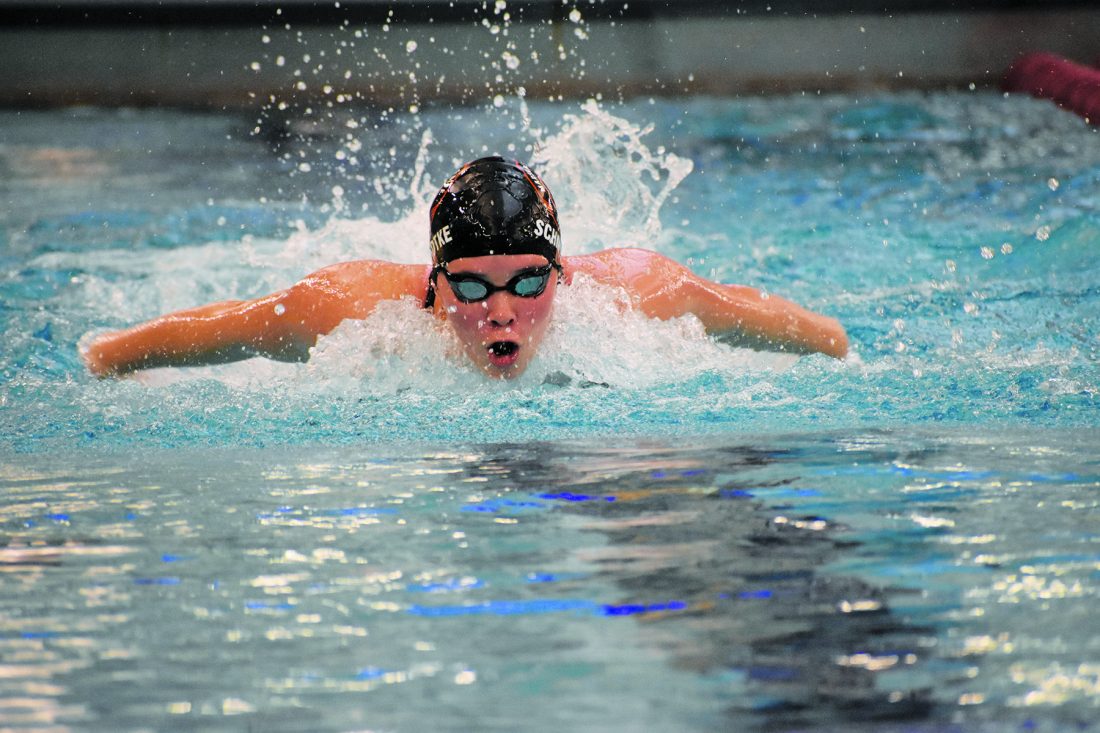 Photo by Sam Thiel Marshall's Amelie Schmidtke competes in the 200-yard freestyle during the Class A prelims on Friday at the Jean K. Freeman Aquatic Center.

MINNEAPOLIS – For many athletes, being on the biggest stage of their sport can bring a variety of emotions. Whether it’s the first time they are stepping onto the playing surface or showing signs of an experienced competitor, a driving force of success can be measured by their ability to stay composed in the biggest moments.

While it came under different scenarios, Marshall’s Nyssa Bentz and Amelie Schmidtke displayed that cool-under-pressure demeanor at the Class A prelims on Thursday and as a result, qualified for the final day of the meet at the Jean K. Freeman Aquatic Center on the campus of the University of Minnesota.

Bentz will compete in the championship heats in both the 50 and 100-yard freestyle for the second straight year.

“It feels good and I’m really excited,” Bentz said on being back at state meet and making it to the finals. “I was actually strangely calm and it was a weird feeling, but I got in and just swam. I wasn’t really nervous or anything, I just swam and it was a pretty good race even though I added a little bit of time. I think [today] will be better.”

Schmidtke will swim in the consolation heat in the 100-yard butterfly. She said it’s a great feeling to be able to compete amongst some of the state’s best.

When Schmidtke got out of the pool, she had no idea she had made it to the final day, but was extremely happy when she found out.

“I didn’t really realize that I’m able to swim [today], but now I know and I’m very happy because the 100 fly is one of my most important races and I’m very proud to swim again,” Schmidtke said.

Making her fourth trip to state in as many years, Bentz began her day with the 50-yard freestyle, the event she qualified for in the championship heat the past two seasons. Just like she was able to do a year ago, Bentz improved on her time by finishing first in her heat with a time of 23.90 seconds, a mark that would be good enough to earn her a spot in the championship heat with a fifth-place finish overall.

Looking to go 2 for 2 on the day in qualifying, Bentz wrapped up her prelims in the 100-yard freestyle. She would take second in her heat and post a time of 52.88 seconds overall, taking the sixth spot in today’s championship heat.

One of the keys to her success? Bentz kept it simple: Relax.

“Like I said, I was strangely relaxed,” Bentz said. “I think that was good with just dealing with nerves because you tend to get nervous at big meets like this, but just staying relaxed really worked well for me to secure those spots.”

Marshall coach Nikki Bell said she was pleased with the composure that each swimmer showed throughout the afternoon and how they were able to accomplish some of the things they set out for.

“There was just so much more composure as they’ve gotten used to this format; with Amelie, I was super pleased with that 100 fly to be able to move up a spot and to get a swim back. We talked about having one last swim and her last words to me were, ‘If this is my last race, I’ll be ok.’ I’m glad that it’s not,” Bell said. “With Nyssa, her composure has been much more elevated this year and she’s already very mature with doing what she needed to do and be able to come back and be in the Top 8 and know she’s got a shot at medals and being on the podium at finals. That’s what she needed and that’s what she wanted; I felt like she was really smooth and relaxed in the 50 and the 100 and I feel like we can pick up the intensity [today].”

The Class A meet will conclude with the final round today beginning at noon. As both Bentz and Schmidtke head into their final races, they both want the same thing: a strong finish.

“I want to try and beat my time and be as fast as possible and we’ll see what happens,” Schmidtke said.

Bentz added she is looking forward to capping her career on a high note.

“I think just getting my hand on the wall for the last time and turning around and seeing a good time that I’m proud of and just being happy with myself being at this meet and with my high school career,” Bentz said.